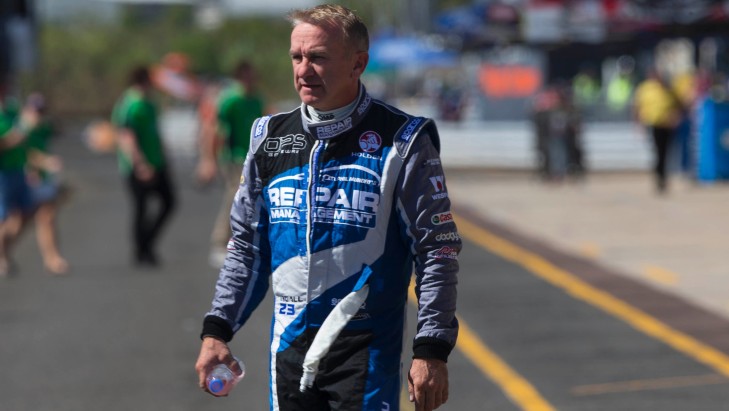 Having qualified ninth, Russell Ingall's gamble to sacrifice a result yesterday in order to press for a better showingin today's Race 19 of the V8 Supercars Championship at the SKYCITY Triple Crown Darwin 400 is one step closer to paying off.

Qualifying in the top 10 was crucial in order for him to take advantage of the gambit.

Drivers are expected to use up their two fresh sets of soft tyres over about 50 laps of the 69 lap race, which means they must also race at some point on the best of their hard rubber left over from Friday practice and Saturday qualifying and racing.

There are up to six cars with fresh hard tyres to use this afternoon, but Ingall is the closest to the front.

"I was hoping to be in the top 10 so that was in the game plan," he told v8supercars.com.au. "We had to be there to take advantage of what we have got, but now we have to decide when we are going to use them.

"It will either be the first or second stint.

"It's a tough call, I think it's going to be mixed, because any one in a two car team I think will mix their strategies. But either way we are in a lot less pain than a lot of others.

Ingall said he was looking forward to the race, which with its longer distance and pitstops suits his ability to race forward from his qualifying position.

"The car has genuine speed on soft tyres, we qualified there on merit. It will be pretty interesting...

"Do you remember Winton? You ain't seen nothing yet!"

Championship leader Mark Winterbottom will start in 10th, alongside Ingall.

Russell Ingall  ›
15' Repair Management/Team CoolDrive ›
2014 SKYCITY Triple Crown Darwin  ›
Stay In The Know
Sign up to the Virgin Australia Supercars Championship Newsletter
We use cookies to ensure that we give you the best experience on our website. If you continue to use this site we will assume that you are happy with it.Ok