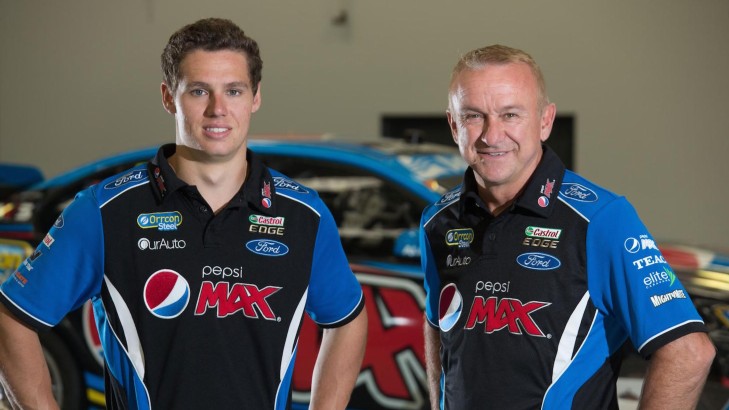 Russell Ingall is excited to step into a Prodrive Falcon at this weekend's Castrol Gold Coast 600 and isn't ruling out a return later in the season.

With young gun Cameron Waters to focus on clinching the Dunlop Series title at the season finale in Sydney, Prodrive is yet to name the driver for the #6 at that event.

And while he hasn't yet turned a lap in the Pepsi Max FG X, Ingall wouldn't say no to another spin at the end of the year if the opportunity arose with both the team and FOX SPORTS.

"[Waters] has got to get that title and he will be absolutely concentrating [on that]," Ingall told Inside Supercars this evening when asked if this was a one-race deal.

"It probably would be hard to do dual duties in the Sydney race and we'll just have to see what comes out of this weekend.

"Obviously I'll have to check with my good friends at Fox whether they want to release me again and do Sydney.Either way,it'd be great to do it if we get the call up - I'd love to do it - but we'll cross that bridge when we come to it.

"The main focus is to now get through this round -I'll tell you what, wouldn't it be great to get one of those surfboards, stand up there on the podium - especially at my young age as well!"

Ingall has been a man in demand this season, fresh out of a Holden Racing Team Commodore and filling in for injured James Courtney.

The switch from blue to red came suddenly - before official confirmation that Courtney would be back for the Gold Coast.

"I felt a bit guilty, I felt like I had a lot of girlfriends!" Ingall joked.

"I think it's good that I can balance it up a bit as well because in my career I drove both cars - I drove Holden and Ford.

"So it's going to be great now to come back with these cars - car of the future was only in a Holden ... to jump into a Falcon as well will balance it up.

"There was a lot of Ford support for me actually at Bathurst, so many people wearing the blue came up to me ... even though I was in a Holden.

"So it would be nice to actually balance it up, drive both cars an so far the support has been overwhelming. It has been really positive."

Ingall has performed well on the Gold Coast in the past and earned his last V8 Supercars podium at the circuit in 2013 with Ryan Briscoe.

He's confident of another good performance in a very different car.

"I've had a pretty good strike rate here over the year as well and it's been one of my favourite circuits - to do it in what will potentially be the championship winning car and team as well is pretty exciting," he said.

"Everyone raves about this car, everyone who drives it ... they're strong at street circuits so like I said that's one of my strengths as well, so I'm really interested to see the comparison to the car I just jumped out of.

"I'm really excited actually, about driving the car but actually working with the team as well. You get a little bit of an insight into what makes this team tick."

After spending some time with 21-year old Waters, Ingall had nothing but positive words for the up-and-coming star.

"It's pretty refreshing and I really rate him, he's a good kid.

"Like I said, he's going to head all the way to the top - but sometimes you have to be grounded so I think my mentorship will probably be more outside the car than inside because inside he's absolutely dynamite."