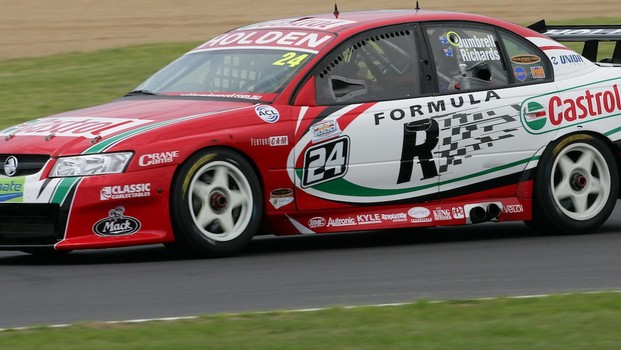 While excitement swirls at the possibility of V8 Supercars blasting past 300km/h at the Supercheap Auto Bathurst 1000 this year, Larry Perkins will be wondering what all the fuss is about.

Back in 2005 the lead Castrol Perkins Racing Holden Commodore VZ topped 300km/h several times during the lead-up to the big race with Paul Dumbrell and Steve Richards at the wheel.

The only problem was the speed was met with significant scepticism along pitlane, some Holden and Ford rivals saying it simply could not be done.

For 2005 the field had swapped to a new, taller 3.15:1 differential ratio. And that combined with the 7500rpm engine rev limit and the diameter of the 17-inch Dunlop control tyre made for a 294-295km/h top speed, his rivals said.

This year V8 Supercars will be monitoring whether to swap from the 3.15:1 diff ratio to a taller ratio if there are any signs the new Albins transaxle is suffering because of extended time on the rev limiter down Conrod Straight.

According to V8 Supercars calculations that will lift the theoretical top speed of the new generation racers from 298km/h down Conrod to 310km/h.

Back in 2005 Perkins produced data that showed Richards hit 300km/h on Thursday and Dumbrell 302.4km/h on Saturday. Richards matched that speed later in the day.

Dick Johnson Racing also claimed to have hit 300km/h but Perkins was the centre of attention and scepticism as he noted with some irritation.

“I’m sure they’re not seeing it (300km/h) because we’re doing it and not them; they should be a bit more gracious in defeat,” he said. “Any man with a radar gun can go up (to Conrod Straight) and verify it if they want to. I don’t make claims that aren’t sustainable.

“The top speed at 7500 revs is 304 km/h, so if we had a tail wind we would could still go faster. The rules are very clear: 7500 rpm, which is monitored a millions times a day, the diff ratio is monitored, the control tyre has a precise diameter and you don’t have to be Einstein to work out whether it’s achievable or not, and that’s what the guys should focus on instead of not being gracious in defeat.

Dunlop crunched the numbers and came up with a theoretically achievable top speed of 305.18km/h and even Perkins’ critics agreed it was theoretically possible.

But as Holden Racing Team engineer Richard Hollway (now at GRM) pointed out, theory and practice didn’t always coincide: “If they’re doing 300km/h then we’re doing 300, but we’re showing 294km/h on the limiter and we use the same tyre, the same diff ratio, same gearbox, same revs – we don’t know how they got that figure.”

The highly respected Campbell Little, then at Triple Eight and now at FPR, said: “300km/h is possible but I don’t know that it’s probable. Their speedo might say 300km/h, but I can make my speedo read 10km/h faster in the blink of an eye.

“We did a lot of work over the last couple of years to make sure that our wheel speed was our real speed. If they’ve got 8km/h more than us then TEGA better look at giving Ford an engine parity adjustment. We’re only doing 294 on a good lap and it’s on the limiter and I can’t see how they can go 10km/h quicker at the same place on the track.”

Both Richards and Dumbrell were in no doubt about the strength of the Chevrolet engine propelling their Commodore.

“You can feel the difference, shit yeah!” enthused Richards. “Going into the Chase is actually a battle now, to get through and pull up on the correct line and get around the next left-hander.

“When we got back the guys saw some high 299s then went through the data and found the 300; it wasn’t necessarily on the fastest lap. Since then it’s been pretty regular. It’s awesome. The engine is very good but the car is very good and we’ve been able to use all the power.”

Added Dumbrell: “You could definitely feel the (speed) difference compared to last year. You come through the Chase and you think, ‘Jeez, it’s pretty difficult to keep a narrow line’. It is a significant change.

“I’m on the limiter as I turn into the Chase and we’re a couple of kays quicker at the top of the hill, too; it pulls all the way through. The engine is strong, and it has so much more progressive power and driveability out of the corners.

“It has more top-end and more bottom-end power and is very consistent in the mid-range. It’s a credit to all the boys in the engine shop.”

All that speed did Richards and Dumbrell little good in the 2005 edition of the Great Race. After Richard qualified sixth, Dumbrell crashed the car at the Cutting on lap 26 when the suspension failed. The left front wheel came off the car and smashed into the windscreen of the Craig Lowndes/Yvan Muller Falcon, which still managed to finish 15th after repairs. 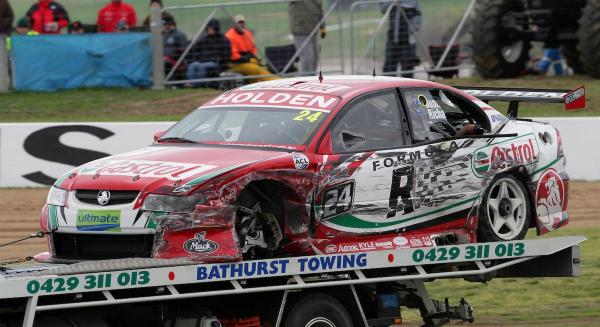 How important is 300km/h-plus down Conrod to a fast lap? Lowndes is the fastest man around Mount Panorama in a V8 Supercar, setting a 2min06.8012 in practice in 2010. The TeamVodafone Commodore VE was tapped out at ‘only’ 290km/h in sixth gear on that lap just before he lifted for the Chase.