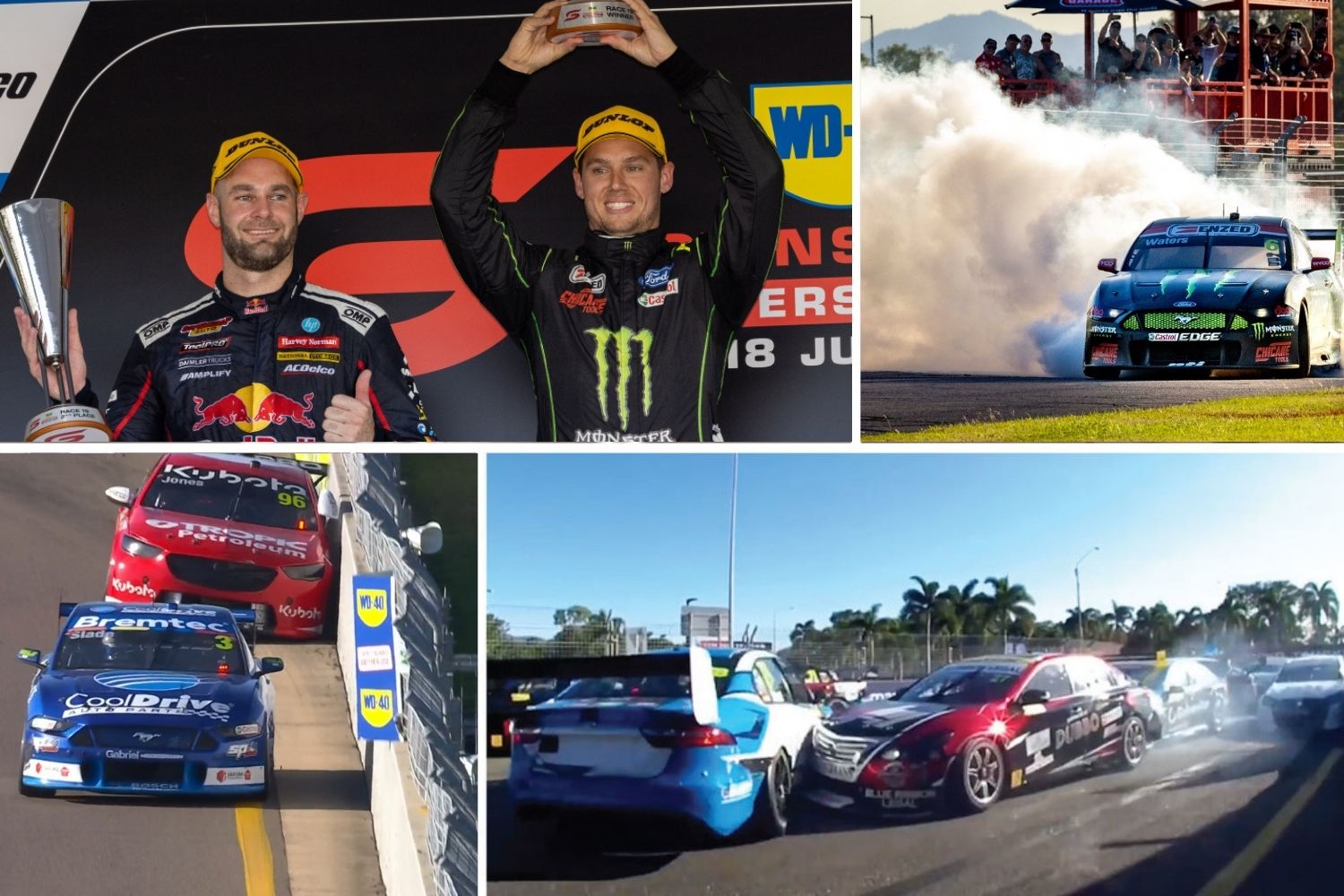 Back-to-back weekends at the Reid Park Street Circuit provided some of the most memorable moments of the 2021 Repco Supercars Championship.

Rivals clashed, teammates went head-to-head, and fans were treated to close battles throughout the field.

One week on, Supercars.com takes a look at the best moments from the WD-40 Townsville SuperSprint

A split-second decision to not return to pit lane when the BP Ultimate Safety Car was called on lap 18, netted the Tickford Racing driver the lead over Shane van Gisbergen, but the fight to the flag was far from over.

After an intense nine-lap battle, Waters clung to the lead by his fingertips, and denied van Gisbergen win No. 12 of 2021 by just 0.8s.

The opening Super2 race in Townsville began with high drama but called early due to a major multi-car pile-up.

The race was red-flagged after a collision between Tyler Everingham and Zak Best, with several drivers in the bunched pack left with nowhere to go.

3. Fullwood sandwiched between Waters and Reynolds

Dragging down the main straight at over 230km an hour, the trio were locked in a fierce contest heading into Turn 1.

Fullwood yielded to Waters for ninth by Turn 2, while Reynolds attempted to duck down the inside.

The Kelly Grove Racing driver completed the move in the following corner, with Fullwood dropping back to 11th after the spirited exchange.

The Red Bull Ampol Racing garage was holding their breath throughout the final stint of Race 18, seeing van Gisbergen and Jamie Whincup locked in a door-to-door battle for the win.

Lap 24 saw the pair make contact on the final corner, before drag racing down the main straight.

The championship leader had the inside line heading into Turn 2, with the seven-time champion standing his ground.

Whincup couldn’t make the move stick, having to settle for second behind van Gisbergen.

The Triple Eight duo joked the exchange landed them in hot water with team boss Roland Dane, but fans were thrilled with the gutsy action.

Super2 driver Jack Sipp pulled off the save of the weekend in Race 2, doing a full 360-degree spin without hitting the wall.

An exchange with Super3 driver Nash Morris saw the #67 Ford Falcon make contact with the rear of the Eggelston Motorsport driver, turning him around on Lap 7.

Sipp managed to keep the #38 Holden Commodore out of the wall, and miraculously avoided any collisions with oncoming traffic.

After a thrilling tussle with Tim Slade for a top 10 finish, Macauley Jones hit the wall at Turn 10 on lap 18.

It was tough end to the weekend for the Brad Jones Racing driver, who recorded his 100th career start on Sunday.

Jones scored his best ever qualifying result for Race 19, starting from eighth.

Championship leader van Gisbergen had an undesirable start to his second weekend in Townsville, qualifying sixth for Race 17.

Admitting he was ‘angry’ on the grid for the opening race on Saturday, the New Zealand driver executed a robust overtake on Brodie Kostecki on lap 5.

The move pushed Kostecki onto the grass and down the order, seeing van Gisbergen pinged with a 15-second time penalty for a driving infringement.

Race 17 was one to forget for both Red Bull Ampol Racing drivers, with Whincup copping a 15-second time penalty for speeding in pit lane.

Admitting he was ‘pushing the limits’, the seven-time champion pulled up closely to the back of Cameron Waters at the entry to pit lane.

Although crossing the line in second place for the 39-lap sprint, the 15-second fine pushed Whincup down the order to record fifth for Race 17.

9. Drivers face off in backyard cricket

Supercars drivers enjoyed competition of a different kind in Townsville two days ahead of the WD-40 Townsville SuperSprint, with a game of backyard cricket.

In an enthralling battle to the finish, Cameron Waters denied van Gisbergen another victory in the final race of the WD-40 Townsville SuperSprint.

After starting from pole, the Monster Energy driver conceded the lead to van Gisbergen on lap 5 but regained first place during a mid-race Safety Car.

In a 15-lap dash to the end, van Gisbergen tried in vein to overthrow Waters, treating fans to an intense battle between championship rivals.