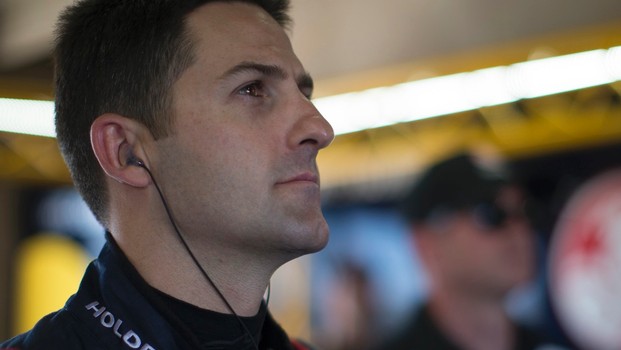 Iceman Jamie Whincup showed all his guile and class as his main rivals imploded around him to score an amazing six out of eight race wins in Darwin today.

Whincup did it yet again when he pulled a last minute qualifying lap from nowhere, and then exploited some amazing errors and misjudgements behind him to take leg one of the SKYCITY Triple Crown in Darwin.

Teammates took out teammates in the second half of the 60/60 format, there was controversy when Whincup was allowed to make last minute adjustments on the starting grid and at one stage there was nearly a 15 car pileup.

Whincup reigned supreme among all of that despite a fierce challenge from The Bottle-O Racing's David Reynolds who got taken out by his teammate Mark Winterbottom. That allowed VIP Petfoods Shane van Gisbergen and HRT's James Courtney to sneak onto the podium.

"I haven't been able to crack this 60/60 thing until now," Whincup said. "It's somewhat artificial because we don't know what everyone is doing with their tyres, we are so limited. You could have run a set each in that race, only put two new ones on or run one set the whole way."

Whincup's Red Bull Racing Australia's team forgot to refill his ice box which chills the water that runs across his body to keep the drivers cool as a safety mechanism in the severe heat.

"There was a bit of a kerfuffle going on," said Whincup. "(I think) we got the all clear from the stewards to fill the ice box up. They gave the all clear which was nice of them. I would have gotten through the race anyway but have been pretty ordinary right now."

The race blew up with only five laps remaining when Winterbottom and Reynolds collided at the hairpin, a teammate taking out his own.

Winterbottom took the inside line and pushed Reynolds aside, spinning the then second-placed Bottle-O Racer back into 14th place.

Winterbottom subsequently had his race ruined with a drive through penalty. It meant all three FPR cars went from all being incredibly strong to controversial incidents ruining their day. It cost the team two podium places.

Whincup was disappointed for Reynolds who was looking at his first podium of the year.

"He's a good straight shooter. He deserved a good result today after being on pole. He played it really clean. I was disappointed to see him go out but there's still a big day tomorrow," he said.

Reynolds led at the 'half time' break with a relatively straight forward first 21 laps. He got around Whincup early when the Champion made a rare mistake and held station from there. There was little action at the front but plenty in the battle packs.

The Pepsi Max pair of Winterbottom and Davison were third and fourth at the point. Craig Lowndes, Garth Tander, Courtney and Van Gisbergen provided the meat of the action with some great racing. Teammates Jason Bright and Fabian Coulthard were on the fifth row for the restart.

From the restart the ever-alert Whincup conceded the first corner as the cars crunched together at the rolling recommencement, and then swooped on the next two turns when the outside line turned into an inside line. It was as if he planned it all along.

Winterbottom and Davison were right on both lead bumpers at that point, waiting for the chance to jump. But they only ended up tapping each other and losing ground to the leaders, with some help from Tander who was smacked from behind by Lowndes, who in turn got belted by Courtney.

Tander displaced Davison amongst all of that action.

Earlier Reynolds claimed his second career ARMOR ALL Pole Position, after the Top 10 Shootout at Hidden Valley Raceway. It is also the sixth pole position for Ford Performance Racing of the last seven races at the circuit.

Jamie Whincup  ›
15' Red Bull Racing Australia ›
2013 SKYCITY Triple Crown  ›
Stay In The Know
Sign up to the Virgin Australia Supercars Championship Newsletter
We use cookies to ensure that we give you the best experience on our website. If you continue to use this site we will assume that you are happy with it.Ok