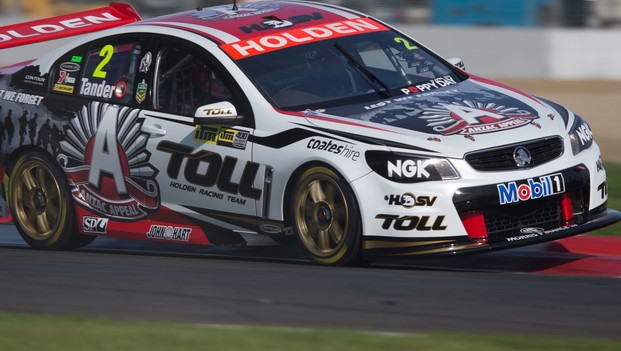 Despite rostrum pace at the back-to-back Tasmanian and NewZealand V8 Supercars Championship events, Holden Racing Team still has muchwork to do to re-emerge as a consistent front-running threat.

That’s the view of Team Principal Steve Hallam, the EnglishFormula One veteran recruited by the Walkinshaw family to arrest the slumpwhich has seen Team Red go winless since Bathurst 2011.

Hallam, who has been in charge since late 2011, hasreorganised the structure and personnel within the Clayton enclave, brought infellow Englishman Tony Dowe as engineering chief and led the development of theWalkinshaw Racing Holden VF Commodore Car of the Future.

“I think we have the operational structure in place now, butwe still need to find some more performance,” he told v8supercars.com.au.

Both Garth Tander and James Courtney showed strong pace attimes across the two ‘off-shore’ events, with Courtney sitting third in thechampionship after Tasmania. Tander scored top 10 finishes in all four NZraces, running down and passing Triple Eight nemesis Jamie Whincup to finishsecond in the final sprint at the ITM 400 Auckland.

“We are not where we want to be but we are in that topquarter I would say,” said Hallam. “It’s about being there consistently,defining what problems we need to fix in terms of going faster and thenaddressing them.”

While Hallam has out-sourced engine work to expeditedevelopment, he revealed the primary issue the WR-designed Commodores – whichare run by HRT, the Supercheap satellite and the D’Alberto’s customer HiFlexteam – have is a front-end handling deficiency.

He confirmed both in-house design solutions and purchasingthe Triple Eight Race Engineering front-end had been considered, but would not revealwhich direction had been chosen.

One impediment to going with Triple Eight is the supplytimeline which is said to be around three months. Another less logical and farmore galling issue for WR is that Triple Eight is home of the otherfactory-funded Holden team, Red Bull Racing Australia, which as Team Vodafone well and truly out-raced HRT in recent years.

“We believe we need to move from where we are and it’s whatdo we move to?” explained Hallam. “The Triple Eight front-end is commerciallyavailable and is on a number of cars in pitlane. It’s not the sort of thing youwalk up to the Triple Eight shop and walk out with under your arm because thesethings take time.

“We are working with our designer to decide if we are goingto do it ourselves, if we are going to go this way (Triple Eight), what’s thetiming of each and what’s best for us.”

Hallam made the point that once a direction is chosen thehandling problem won’t be automatically resolved.

Hallam said the reorganised engineering structure under Dowemeant the process would be resolved more efficiently than previously.

“The engineering department now speaks with one voicethrough him. He’s experienced enough to know there is no magic bullet or goldenrivet. It’s about understanding and why you are doing things.”

Hallam refused any temptation to put bold timelines on aHRT’s recovery to full competitiveness, stressing his confidence in solidprocess and structure.

“If you get that right, then it will come,” he said. “Thehardest thing to convince anyone outside the team is that there is no instantfix… It’s about getting on to that plain, and then holding the car in that zone,and then recognising you need to keep pushing it, because all the other teamsare doing the same thing.”

Garth Tander  ›
15' Holden Racing Team ›
Stay In The Know
Sign up to the Virgin Australia Supercars Championship Newsletter
We use cookies to ensure that we give you the best experience on our website. If you continue to use this site we will assume that you are happy with it.Ok