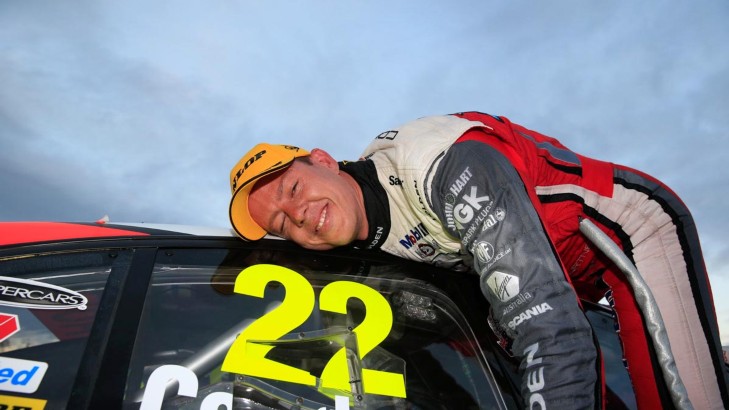 Holden Racing Team has won at its second consecutive race meeting, this time with James Courtney standing on the top step at the Coates Hire Ipswich 400.

It was James Moffat's Nissan that got the jump off the startline, but Courtney looked menacing throughout the race -as did Lowndes.

And while Jamie Whincup came home sixth, he has snatched the Championship lead from Mark Winterbottom with 15 points separating the two.

Winterbottom suffered from a blown left rear tyre with 22 laps to go, a problem his FPR stablemate David Reynolds also had earlier in the race.

Ford Pepsi Max Crew's Chaz Mostert finished once again on the podium, at a track that has been successful for him this and last year.

As the pit stops began, it was Courtney - with a set of green Dunlop soft tyres - who pounced.

"It all worked out... the only thing that went wrong was when I was doing the donuts, I blew the power steering," Courtney said.

"Other than that, the thing was mint. The guys did a fantastic job to turning the car around overnight."

Lowndes wanted to bounce back after horror Townsville - and he did.

"We were just trying to have a smart, clean race weekend for us," the Red Bull racer said.

"We qualified poorly and I put my hand up for it, I just didn't quite get the best out of the car, but the car was great in the race.

"It looked after its tyre and went through some strategy options, with one if we were stuck in traffic early in the race, get in the pits get out of the traffic and get some clean air which we did, and the car ran strong.

"We made an adjustment in that last pit stop and gave it a bit more front, which is what I needed over that longevity."

"We were trying to catch Craig in the last part there, but unfortunately we were just starting to loose the rear tyres. James was starting to come quick," the young gun said.

"I felt like I was in a bit of a go-kart in the last lapthere where you start to block at every corner, but he went around the outside and just locked the front and went off."

Volvo's Scott McLaughlin was in the mix, but a lock up early sent him spearing off at turn three, rejoining back in the pack.

Meanwhile, it was a career best finish for Wilson Security DJR's Scott Pye in fourth.

The next V8 Supercars event will be the Sydney Motorsport Park 400, from August 22-24.