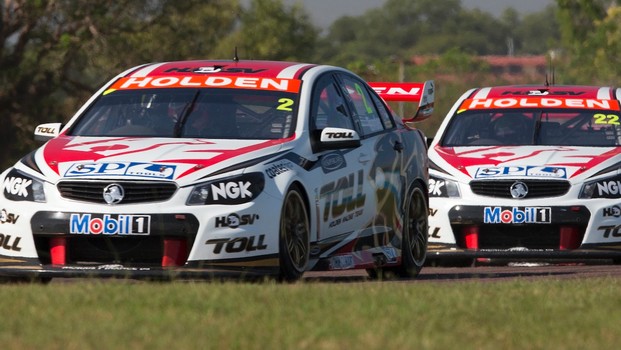 The Holden Racing Team’s steadily improving form has beenaided by enlisting the expertise one of Holden’s most senior chassis engineers.

Michael Barber, a vehicle dynamics engineer who played a keyrole in the development of the VE and VF Commodore road cars and spent twoyears working on secondment at General Motors’ Milford proving ground in theUSA in advanced development, has been quietly assisting HRT for about 12months.

Barber’s role has grown from a friendship with HRT CEO SteveHallam, who had a background in road car chassis engineering before moving intomotorsport.

“Michael came to a number of tests with us and therelationship is now if he is passing he will just drop in and chat to the guysand see what is going on,” Hallam told v8supercars.com.au. “There are a fewthings that we have got rolling with him at the moment that are going on.”

“Michael is a very personable individual and once weintroduced him to the engineering team there was a very easy and open dialogue…The relationship we have with him is on a higher technical level, more aconceptual level than the nuts and bolts level of producing a racing car.”

Barber, who has raced and rallied cars and road-racedmotorcycles, stressed that the exercise was helping him as much as the team.

“When comparing a V8Supercar to a road-going production car, whilst the driver’s demands are wildlydifferent, the fundamentals of vehicle behaviour are surprisingly similar,” heexplained. “The mechanisms and tricks employed to manipulate the car’sbehaviour are the same between these apparently different beasts, with the onlysignificant exception being the use of a spool differential in a V8 Supercar.”

Walkinshaw Racing has been going through a difficult publictesting process at recent events as it tries to sort out a new front-end designfor its Car of the Future V8 Supercars, as well as make other chassis changesin an attempt to lift competitiveness against the Triple EightEngineering-built Commodores and break a winless streak that stretches back toOctober 2011.

But podium placings have come consistently of late and atthe SKYCITY Triple Crown in Darwin, HRT’s James Courtney qualified on pole for Race18 and finished second to FPR’s Mark Winterbottom in the 35-lapper.

“One of the biggestchallenges for a race team is to be able to translate the driver’s comments onthe car into engineering requirements for further development. Then, in turn,any change made to the vehicle is appraised by the driver who provides feedbackto the engineers,” Barber said.

“In the pursuit of tenths ofa second per lap the driver’s comments need to be taken in light of lap times,a car that feels better to drive is not necessarily quicker and vice versa.

“Additionally the changingnature of the cars, tyres, track conditions and even the driver’s dispositioncan mean that a small change in lap times may not be due to the engineeringchanges made to the vehicle but some other factor. A real challenge.

“I have been able to act asan interpreter, of sorts, in this difficult process by translating driver’scomments of what they feel in the car into ‘engineers speak’. Also riding as apassenger has enabled me to get a first-hand read on the vehicle’s behaviour.”

The day at Lang Lang withthe engineers was a key way Barber was able to assist with the ‘translation’process. He chauffered them in the same car in various states of suspensiontune, demonstrating what such characteristics as understeer and overseer feellike through the seat of the pants.

“That helps the guysunderstand the effect of the changes that they make,” added Hallam. “Theyusually see the wave format output in the data and they see the driver eithercomplaining or smiling – normally complaining – and its just helps them bridgethat gap.”

Garth Tander  ›
15' Holden Racing Team ›
2013 SKYCITY Triple Crown  ›
2013 Sucrogen Townsville 400  ›
Stay In The Know
Sign up to the Virgin Australia Supercars Championship Newsletter
This website uses cookies to improve your user experience. By continuing, you will be providing your consent to our use of cookies.Ok