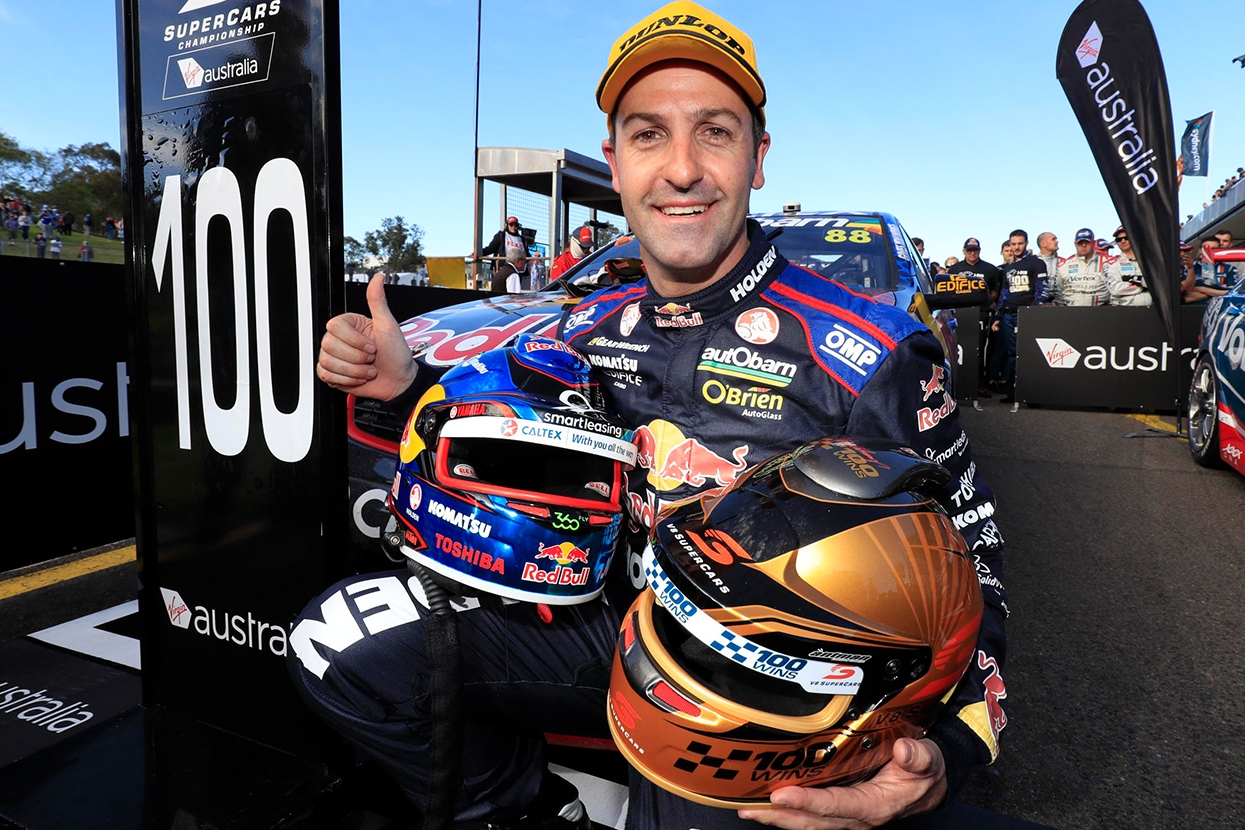 The driver he had to beat that day was none other than Craig Lowndes, who brought up the milestone just over 12 months earlier.

How Whincup won the second race at Sydney Motorsport Park on August 28, 2016 was a marker of the driver who at that stage had won a record six titles.

Whincup entered the Sunday in Sydney on a string of second-place finishes.

A day earlier, he was stung by falling short in a battle with first-year teammate Shane van Gisbergen in an enthralling race.

By day’s end, Whincup eyed title No. 7 with win No. 100 in the bag, with van Gisbergen only fifth.

Van Gisbergen would have the last laugh, completing a remarkable turnaround to deny Whincup the title.

The Sunday Sydney race, a 200km affair at the tyre-killing Sydney Motorsport Park, saw Whincup needing to put in the perfect race to crack the ton.

Lowndes led the early stages thanks to a brilliant start from the second row, racing around the outside of pole-sitter Chaz Mostert at Turn 1.

Triple Eight stuck to its guns on strategy, making early first stops with all three of its cars. 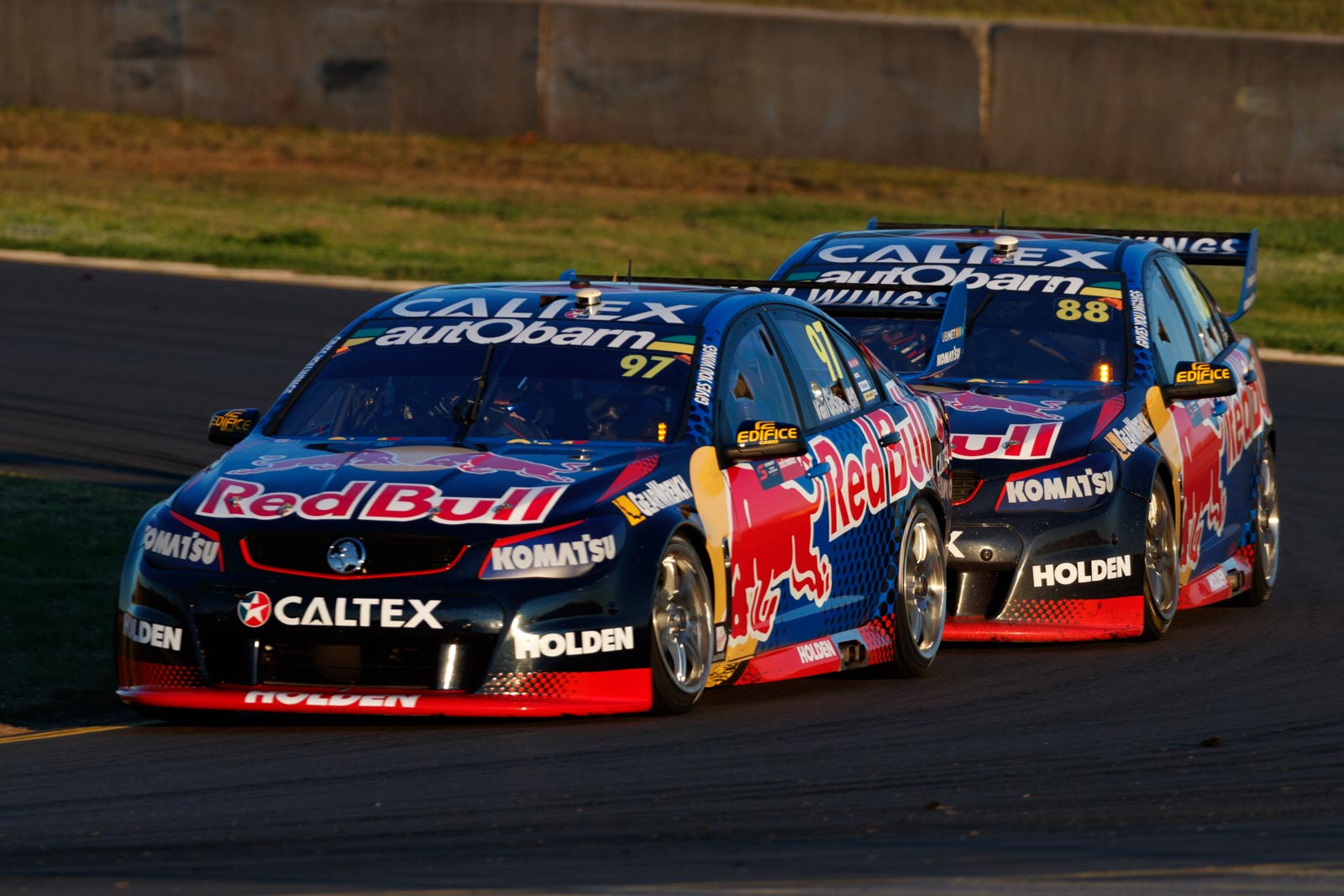 It paid dividends for Whincup as he stormed to victory over Lowndes by nearly three seconds.

Whincup had been pipped to the Saturday win by van Gisbergen by just 0.246s after 31 exhilarating laps of racing.

On a mission in Sunday's 51-lapper, Whincup took the lead on lap 30 and held it until the end.

Van Gisbergen, meanwhile, was turned around by James Moffat and could only recover to fifth.

It was just Whincup's third win of 2016. He began the year with a win in the season opener on the Adelaide streets.

Remarkably, he would have to wait 126 days before claiming win No. 99 at his primary stomping ground in Townsville.

Another 50 days would pass before he would win again, and it was all the more sweeter sharing the occasion with Lowndes on the podium.

"It's a good feeling… I haven't been thinking about it to be honest, everyone's been reminding me week after week," Whincup said. 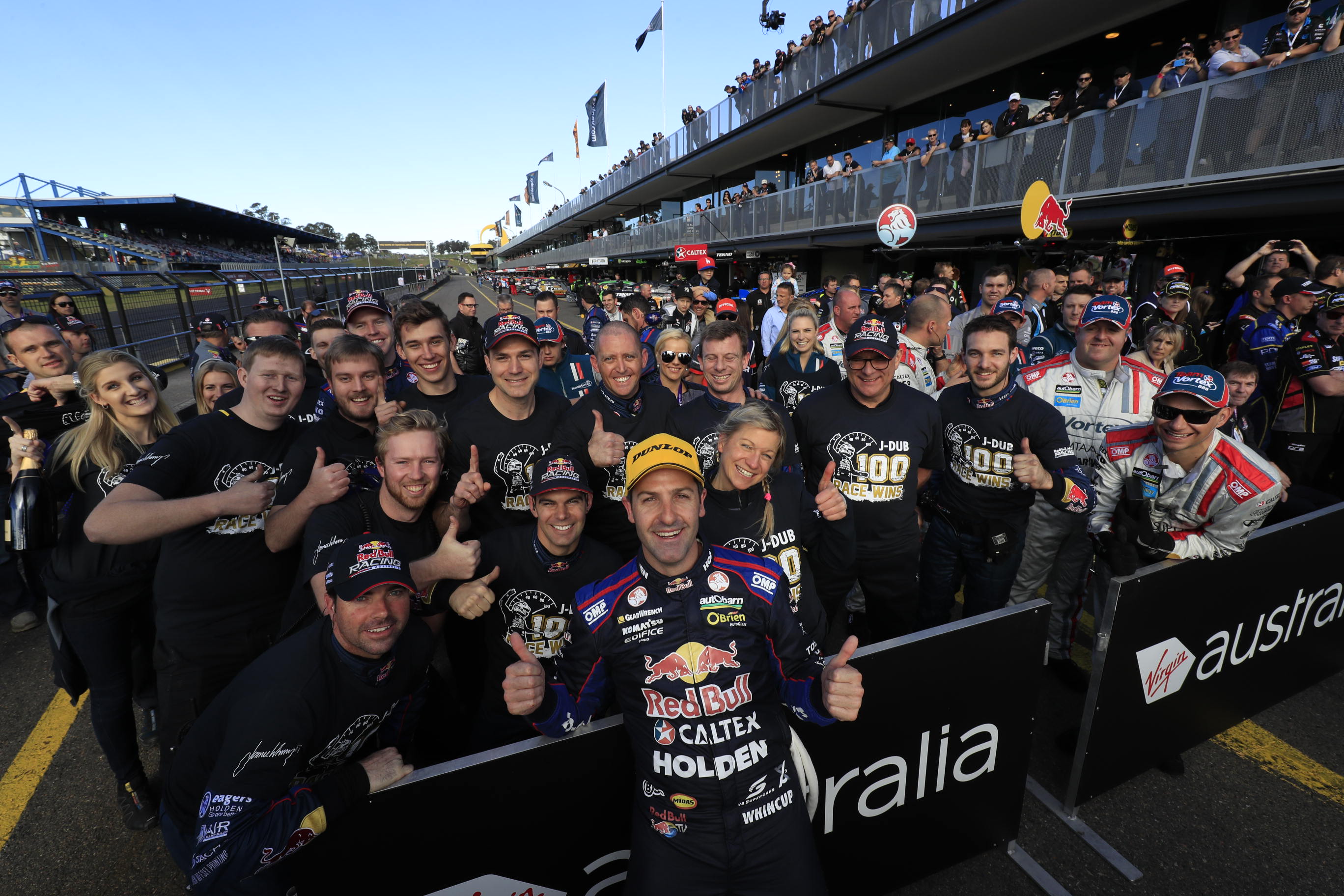 Whincup celebrates with his team

"I've been the bridesmaid three races in a row, but to finally get that win is an awesome feeling. I'd be lying if I didn't say there wasn't some relief there.”

As he did on Saturday, Whincup looked destined to have to settle for second-best for much of Sunday.

Lowndes was desperate to win in his landmark 600th race start, and made Whincup work for it.

"I think today was really fitting, it's exactly what my career has been all about," Whincup said.

"Today was a fitting day for the win, the car was ordinary in the first stint but the team dragged me up and we managed to get a fast pit stop at the end there.

"I'd like to think it's 'not out', there's still a little bit left in me yet.

"I got my first win in 2006, it's been just over 10 years. Every win has been with the same crew, so a massive thank you to everyone at Triple Eight, and all my support crew. Let's see if we can keep it going.”

"It was never a matter of if he could do it, it was when,” said Lowndes, paying tribute to his three-time Bathurst-winning co-driver.

By the time of his 100th win, Whincup had recorded some epic numbers. 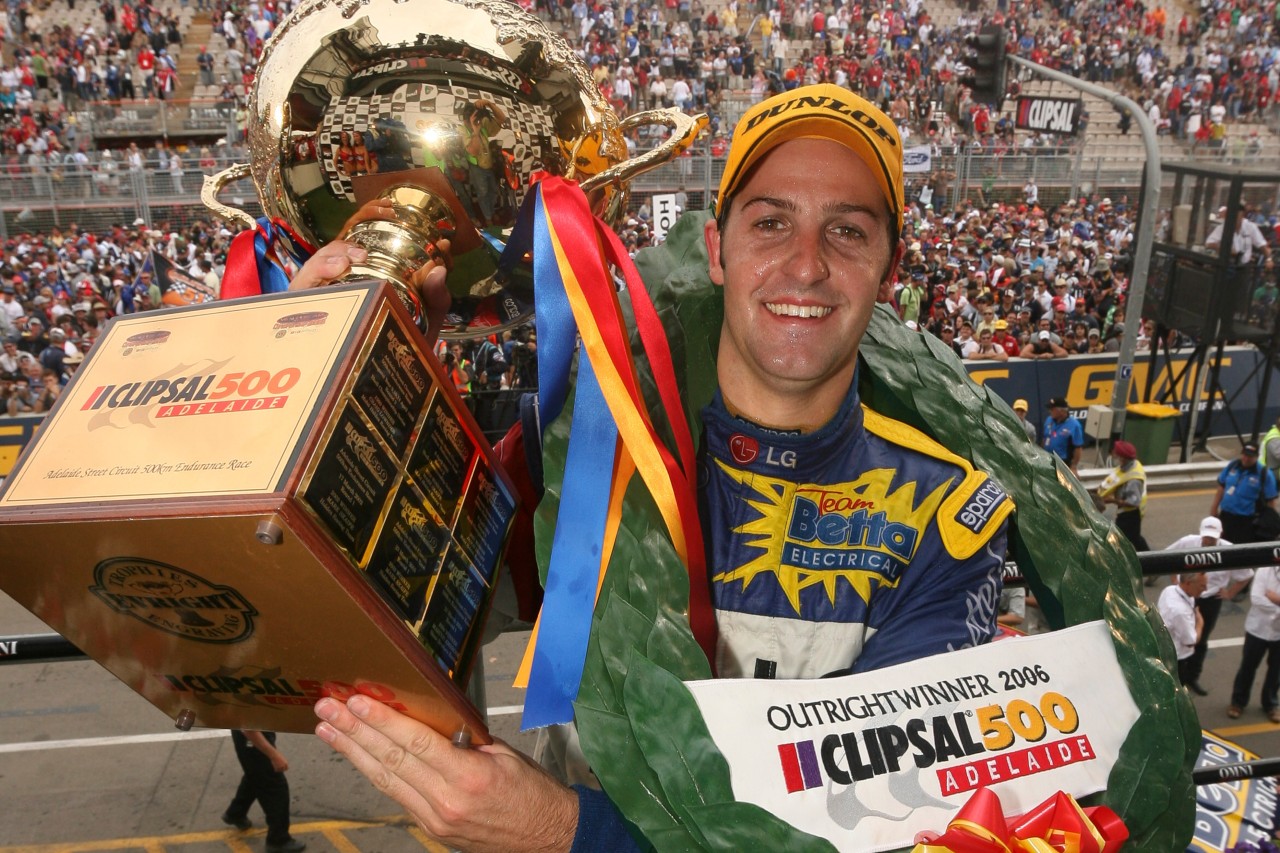 All 100 of his wins had been scored with Triple Eight, his first coming on the Adelaide streets in 2006.

Of his 100 wins, the Sydney win was his 67th in a Commodore, with the remaining 33 in Falcons.

He had taken the 100 wins at 19 different tracks, five of them overseas (Bahrain, Hamilton, Abu Dhabi, Pukekohe and Texas).

66 wins had come on traditional race circuits, with 34 on street circuits.

Through all the successes, Whincup - who will retire at season’s end - just wanted to keep having fun. 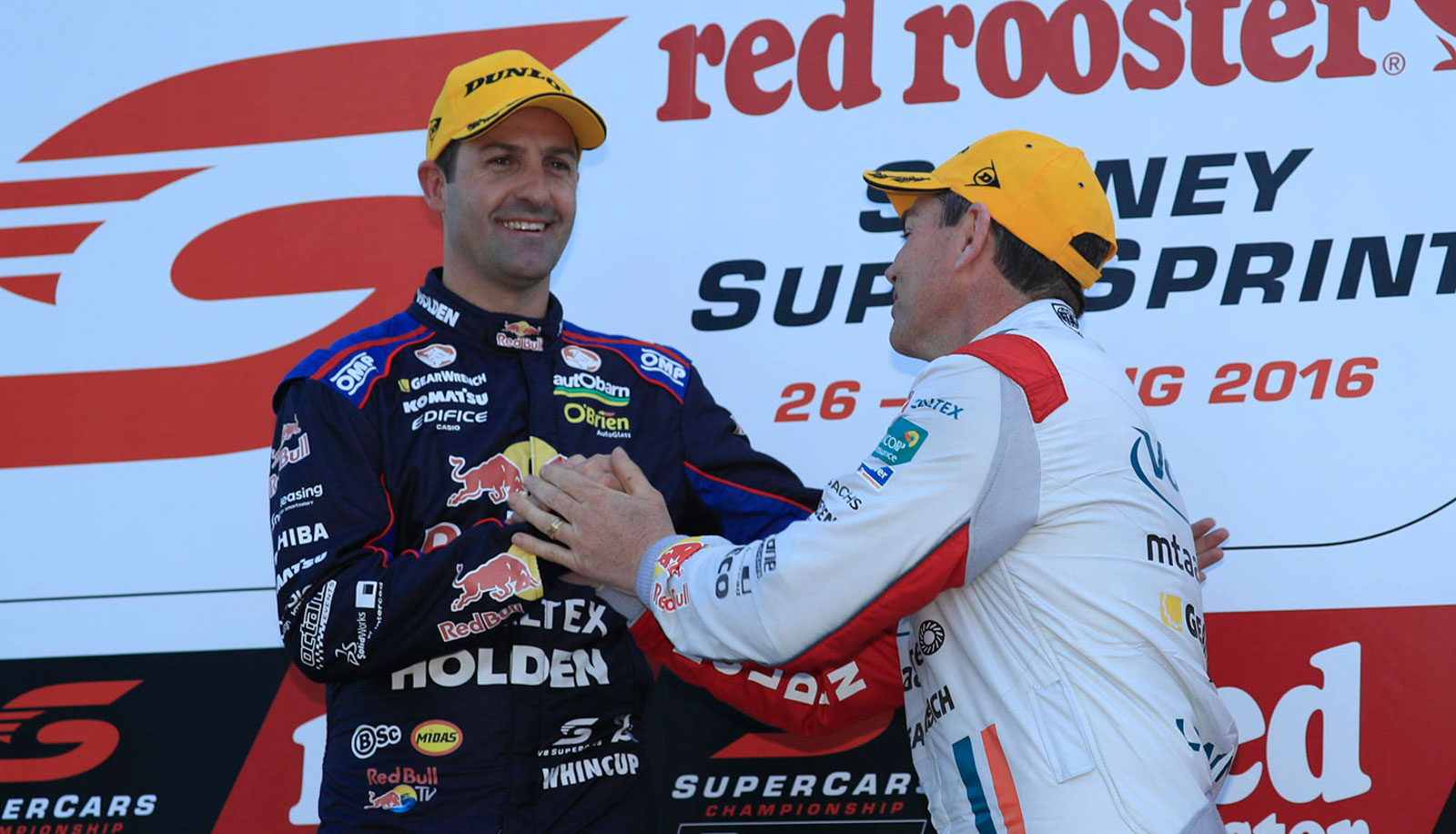 'It was never a matter of if he could do it, it was when'

A seventh title in 2017 and 23 more wins have followed, and he remains in the add to add to both tallies before the 2021 season is out.

"In terms of looking forward, I’m not trying to tick any particular boxes," he said.

"I’m just out there for the fun of racing. We like racing hard and going round in circles as quick as we can and getting to the finish line first.

"The feeling of winning never gets old, it definitely drives me. There are a lot of people who represent the 100 wins, and I’m grateful to all of them."