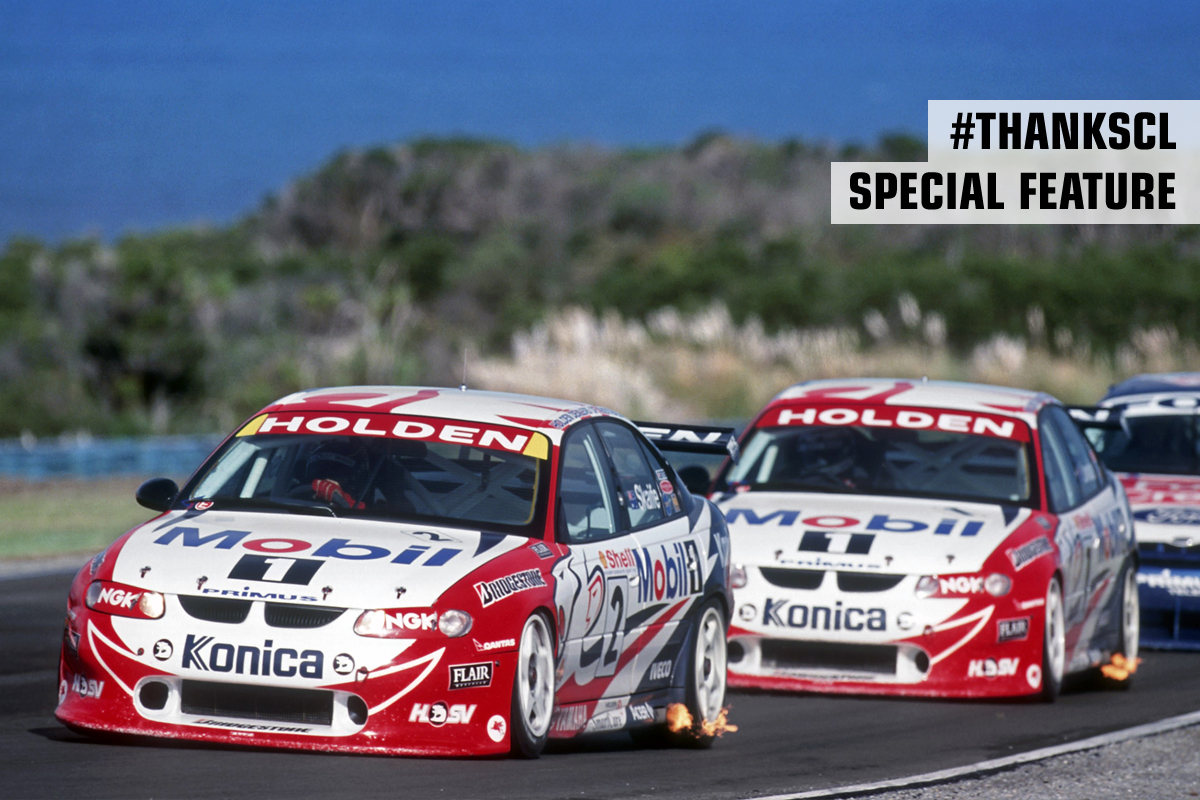 True sporting legends are forged in rivalries and, throughout history, Australian touring car racing’s elite have proven no exception.

Jane versus Moffat, Moffat versus Brock, Brock versus Johnson... the feats of each were strengthened by the ferocity of competition against their opponent.

The career of Supercars’ latest retiring legend, Craig Lowndes, has featured two key rivals; Mark Skaife and Jamie Whincup, both of whom he’s battled as team-mates.

Whincup has been a thorn in Lowndes’ side for the majority of their stint together at Triple Eight. Since 2006, the younger man has won seven titles to the veteran’s none.

While that statistic belies the competition between the pair, the dynamic has never truly reached the heights of the earlier Lowndes-versus-Skaife era. 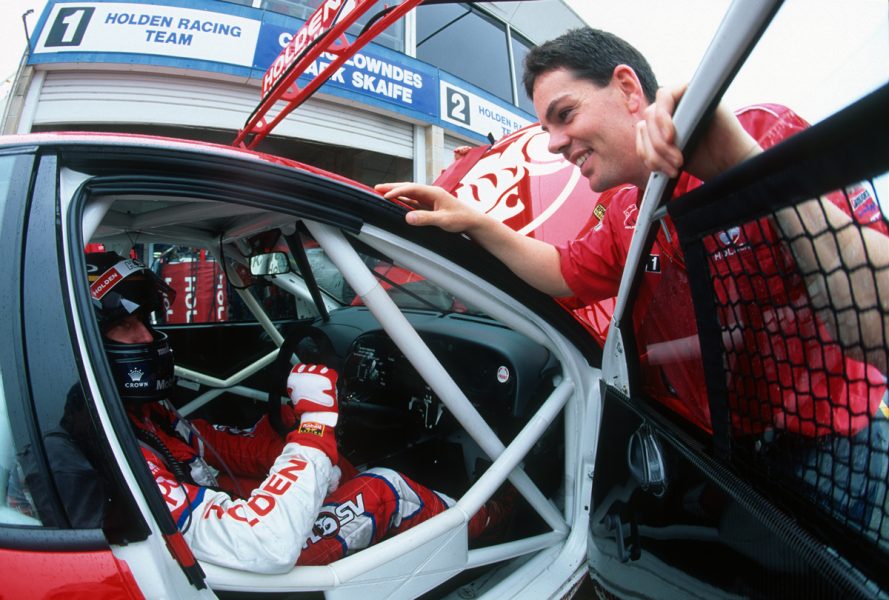 “The difference is now I’m at the other end of my career,” Lowndes reflected to Supercars.com during an extensive interview ahead of his final full-time start in Newcastle.

“Dealing with Jamie has been different to how I dealt with Skaife. Back then you were still fighting for your position, even for the next year, so there was a lot of very strong competition with Skaife.

“These days with Jamie, you can definitely enjoy the events, even if you’re not winning or you’re chasing him, you’re still enjoying it.

“It’s been a different phase of my career and a different way of approaching it compared to what I did with Skaife.”

When Lowndes, then 23, reunited with the Holden Racing Team following a troubled 1997 chasing his Formula 1 dream, it was clear he was not going to have it all his own way.

Skaife, 30, had arrived to fill the shoes of the retired Peter Brock. And, after two lean years with an underfunded Gibson Motorsport, he was as hungry as ever for success.

He laid down a marker upon joining the team for the 1997 endurance races alongside Brock; taking pole for Sandown, a race won by the returning Lowndes, and Bathurst.

What followed was three ultra-intense seasons in which Lowndes won the 1998 and ’99 titles – which proved his final two – before Skaife turned the tables in 2000. 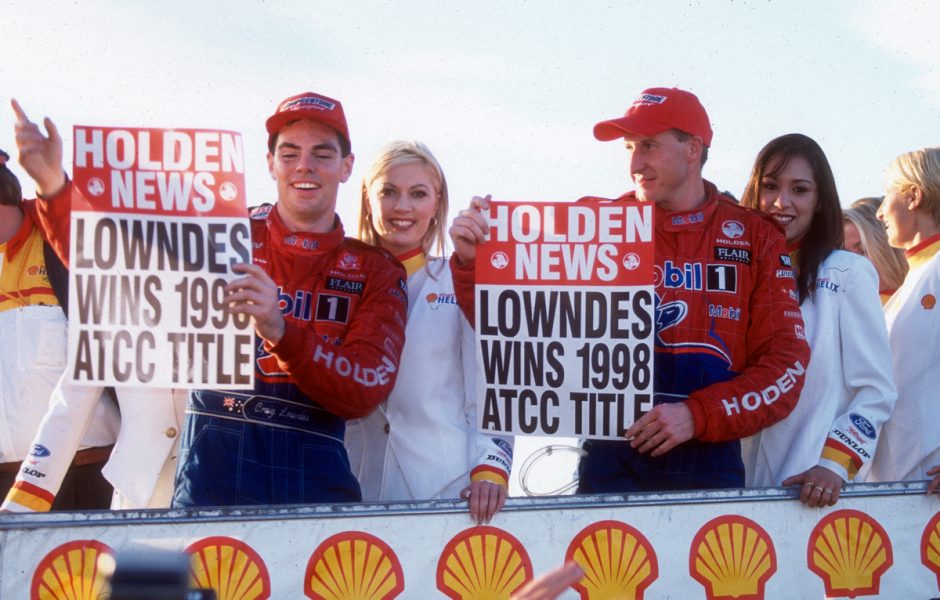 While HRT was very much the best team with the biggest budget, its manager at the time, Jeff Grech, credits the rivalry with getting the best – and worst! – from the squad.

“The rivalry was great, but I tell you, that’s why I’ve got no hair and it turned grey before I lost it all,” the now Preston Hire Racing team manager told Supercars.com.

“They just lifted each other. It was insanely competitive. To be honest with you, they both had fun at the expense of my sanity.

“I’ll never forget, there was one race at Queensland Raceway (in 1999), they were in front banging wheels and guards and I’m on the radio.

“Back then you didn’t have to publish your [radio] frequency. If you did I would have been in jail!

“And typical, after the race you pull them aside and Skaife would have his arms crossed and point and say ‘it’s not my fault’ and Craig would do the ‘what’s wrong Jeff?’

“You just threw your hands up in disgust and just went ‘another day with Craig and Mark’.”

Much like the determined, uncompromising Allan Moffat against the natural, charismatic Brock, the essence of the Lowndes-versus-Skaife battle was in the contrast between their characters.

As has been well documented, Lowndes had learnt a lot from fan favourite Brock during their 1994-96 period together at HRT, and was largely cut from the same cloth.

Best placed to note the differences between Lowndes and Skaife is Rob Starr, who engineered the former to the 1998 and ’99 titles, before linking with Skaife in 2000.

Joining the Walkinshaw team in 1991 and still there today, Starr says the approach the two drivers took to their engineering debriefs couldn’t have been more different. 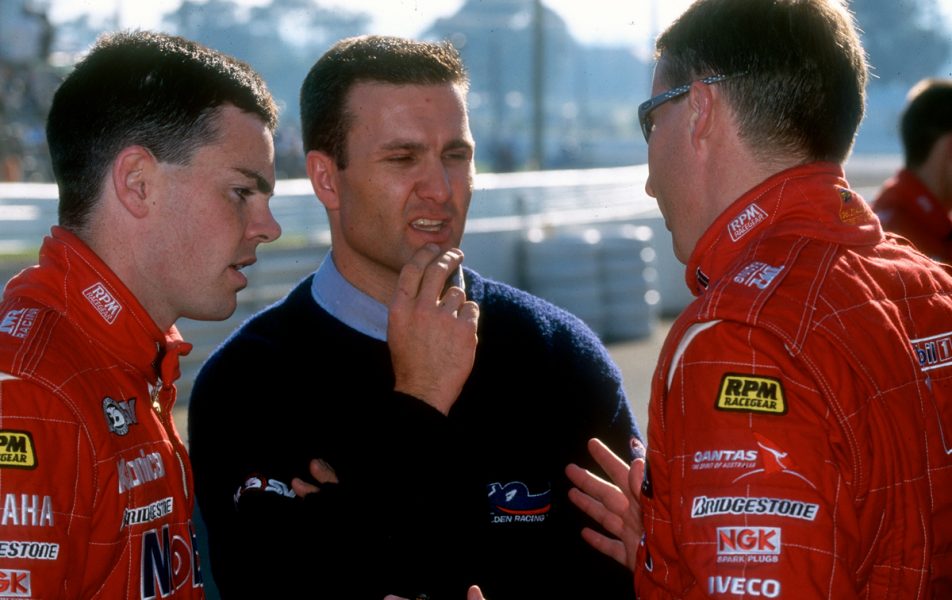 “Lowndesy just couldn’t be stuffed writing, so he came up with the idea of these two stamps, a smiley and a frown,” Starr told Supercars.com.

“Skaifey would be writing an essay and Lowndesy would be putting smiley or frown stamps, maybe writing ‘understeer’ or ‘oversteer’, and that was about it.

“It wound Skaifey up, so that was probably half his ploy on it, as well as saving time.

“He’d stand up, say ‘I’m done’ and off he’d go, and Skaifey would be still there going ‘how is this bloke beating me?’.”

Their styles in the car matched their demeanour out of it; Skaife a considered craftsman and Lowndes the flamboyant natural talent.

Starr says Lowndes’ raw ability was evident from the start and, while all drivers have had to become more technical as Supercars has evolved, his style still shines through today.

“Even if the car had oversteer, you’d watch it and think ‘bloody hell, this bloke is going to kill the tyres’, but he just constantly managed it,” he said.

“You’d always be surprised; you’d be thinking it wasn’t going to last, but his ability to keep carrying the car...

“Skaifey worked hard on the technical side to get the car he wanted and was fast that way. As long as the car was in the window, Lowndesy would tune himself, rather than the car.” 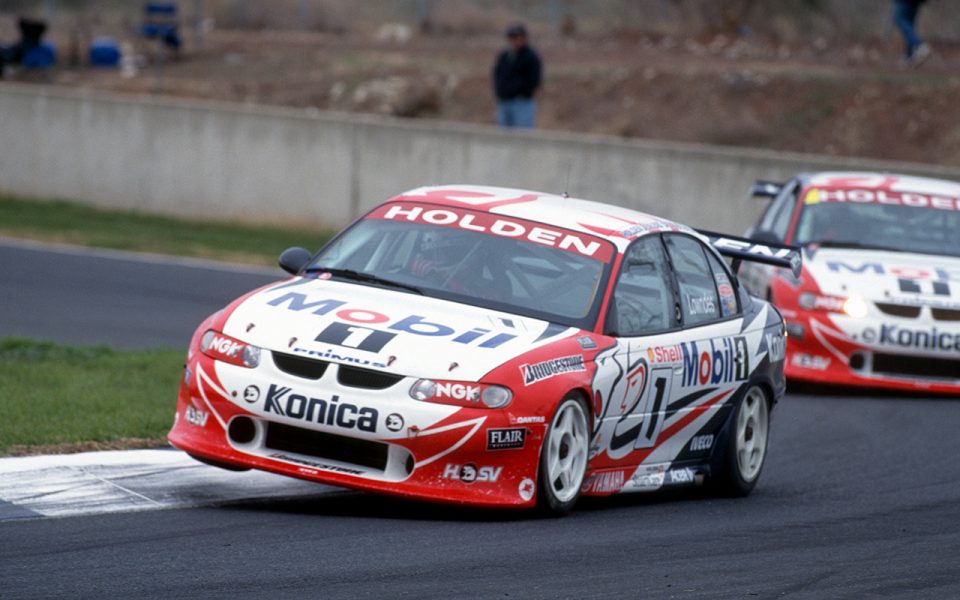 According to Grech, their differing approaches made it all the harder to manage.

“In the end they kept putting a wall up between the two engineers and the laptops and I had to keep pulling it down,” he recalled.

“Mark would go out and usually be quick straight away, because he was meticulous with his car set-up, and Craig would go out, see where he could gain, and then just edge him.

“It was like two blokes climbing ladders beside each other seeing who could get to the top quickest. Every race it was the same.

“Fortunately I didn’t get ulcers, but by the end of a race weekend I’d need to lock the fridge because I’d just want to have a dozen beers after a weekend with those two!”

In short, Skaife was quick in 1998 but not the complete package, with starts - another area where his style differed greatly from Lowndes' - a particular weakness.

Skaife largely had the advantage in 1999 but disasters in the big-points Adelaide and Queensland races meant Lowndes could miss a round through injury and still take the title. 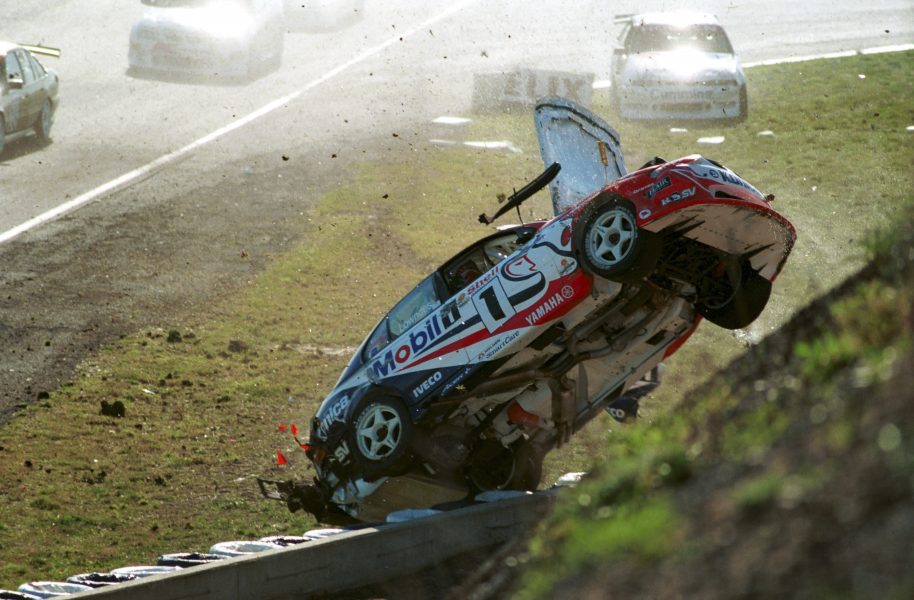 Lowndes won the 1999 title despite his Calder crash

Starr’s defection from Lowndes’ side of the garage to Skaife’s in 2000 is viewed by many as the turning point in the battle, and created tension in the team at the time.

“To me, 1999 was a hard year championship-wise to win it with the stuff that went on, and personally for me I had the biggest rival in the bay next to us,” explained Starr.

“I thought [Skaife] was the big threat and kind of got mentally a bit burnt from that year and thought maybe I needed to change myself.

“Skaifey was asking for a change of engineer and I’d obviously managed to win a couple with Lowndesy and thought it was worth having a reset and challenging myself.

“I thought ‘am I doing a good job or is the bloke steering just better than the rest?’. There was only one way to find out.”

Off track, there was plenty going on in that 2000 season, with suggestions from early in the year that Lowndes was looking to move on.

Ultimately he made a big-money switch to Ford, triggering a messy divorce with HRT and Tom Walkinshaw, who’d signed a 10-year management deal with the driver in 1996. 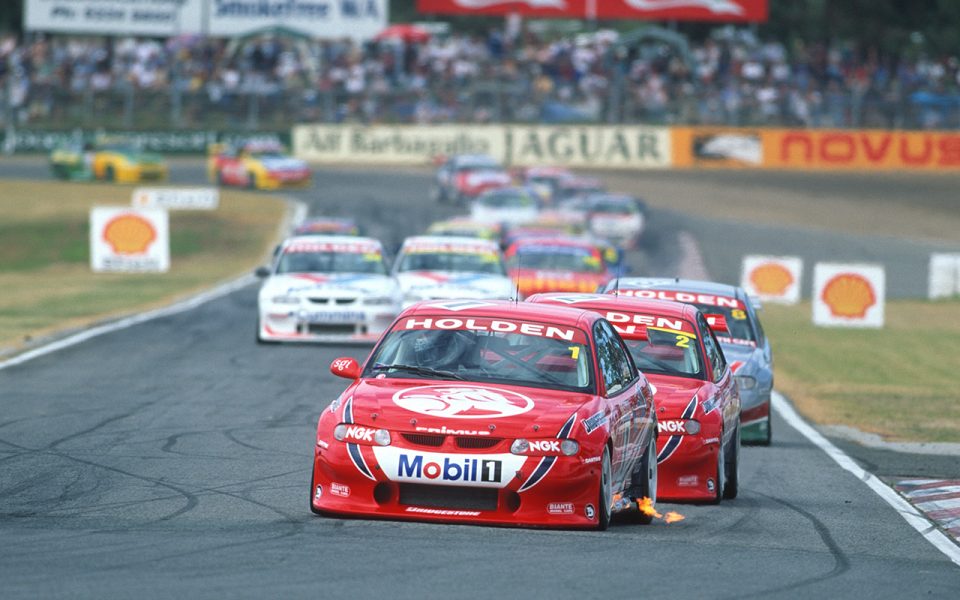 “At the end of the day we probably didn’t handle it that well as a group in some respects and I’d blame myself a little bit for that, but we certainly missed him,” surmised Grech.

Lowndes’ move to Ford for 2001 – coincidently linking up with Skaife’s former team owner Fred Gibson – promised to stoke the rivalry yet further.

It started off in spectacular fashion; Skaife winning the opener at Phillip Island, before Lowndes won on Saturday in Adelaide, and the pair clashed in the Sunday race.

However, Lowndes’ Falcon was not a consistent front-running force and, over the season, proved a far cry from the well-oiled machine that Skaife and HRT had become.

Skaife took three straight titles before being dethroned by a new Ford hero, Marcos Ambrose, in 2003, while Lowndes’ career floundered until he joined Triple Eight in ’05. 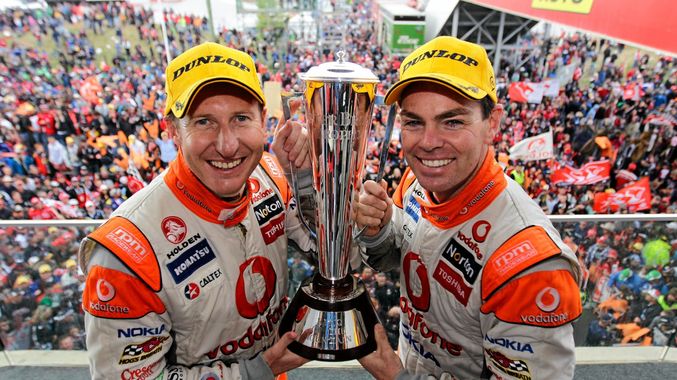 Their rivalry ultimately ended in fitting fashion, joining forces in 2010 at Triple Eight with Skaife now a co-driver; taking a Bathurst win together that had eluded them at HRT.

After another win together in the Phillip Island 500 and a frustrating second at Bathurst a year later, Skaife called time on his driving career.

They’ll have another reunion of sorts in 2019; Lowndes set to join Skaife in the Supercars television broadcasts before returning to the track in the enduros.