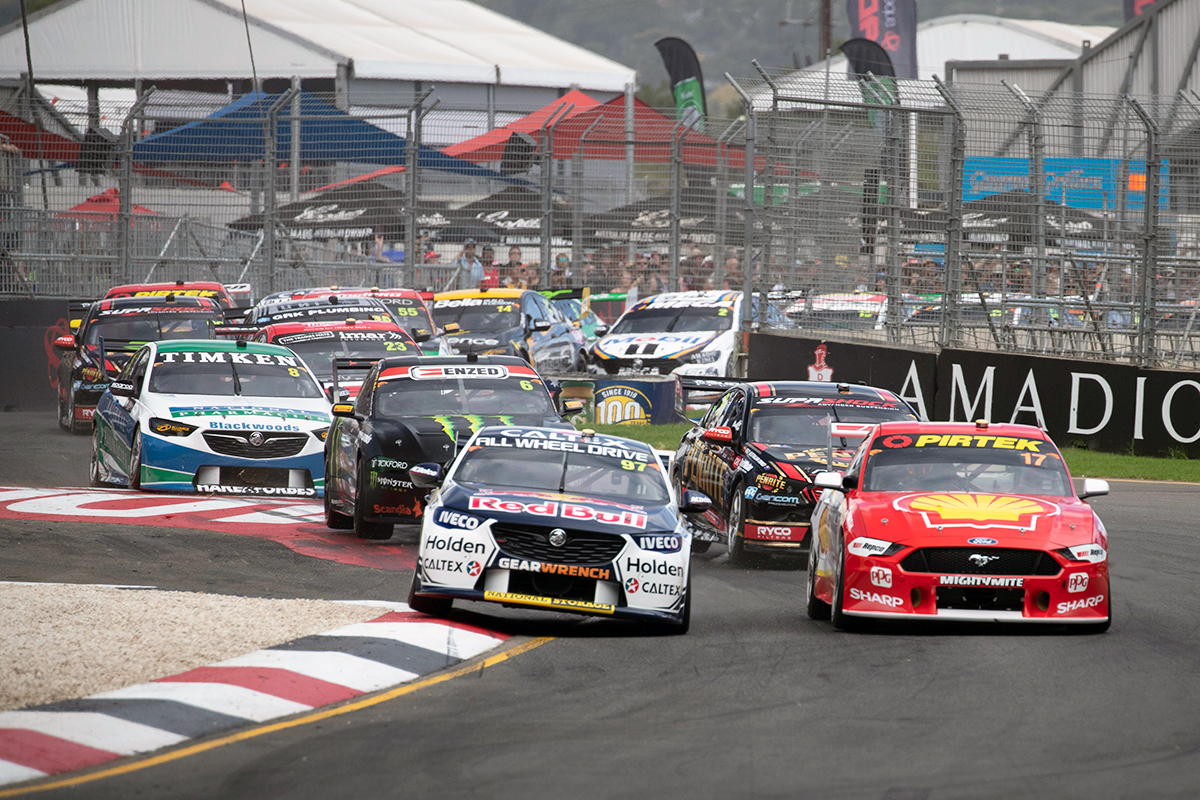 The system, well known in tennis and cricket for ball-tracking animation, is being adopted as a new judicial tool in 2019 following a handful of trials last year.

It is being incorporated as part of efforts to resolve judicial matters in-race, rather than having fans waiting on results into the following hours or even day.

"We will continue to invest to ensure our fans get the best possible experience," Supercars CEO Sean Seamer said.

"We believe that the more a penalty fits the breach, and the more those penalties are applied in race, the easier it is to understand and enjoy Supercars.

"Our ambition is to handle everything in-race for our fans."

Hawk-Eye can collate all relevant vision of an incident in an instant, giving Baird evidence to pair with existing data accessed directly from cars.

Adelaide's season opener was what Baird describes as "the first full run" Supercars has had with the technology, and pointed to the absence of post-race investigations as a key indicator of its influence.

A crew of four Hawk-Eye personnel were in Adelaide, helping deliver a significant step up for the resources on offer. 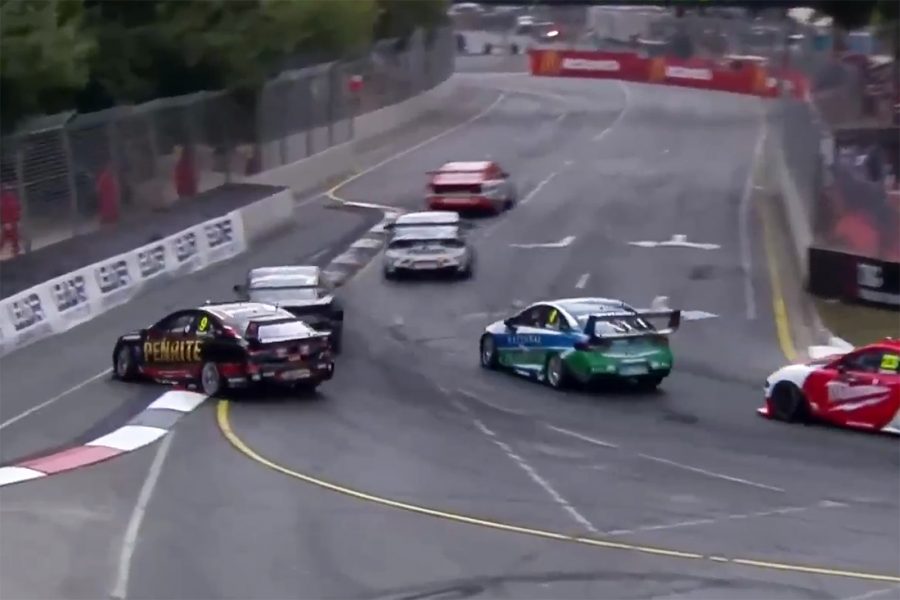 On-demand vision compliments Baird's existing view of the broadcast and around-circuit CCTV cameras, but speeds up the process of looking at incidents.

Specific vision to analyse previously had to be sought via Supercars' TV department producing the concurrent live telecast.

"When we timestamp something, I can within one frame put all 40 cameras back up and I can go through them all at the same time.

"I have the ability to wind forward, backward, pause, ask for more, ask for less and come up with a decision.

"I'm not just firing something down to the stewards saying 'he's guilty, give him a pitlane penalty', they need to understand my process of getting to that decision."

Baird says that marks a genuine step forward as he looks to deliver verdicts on clashes, and has already led to more in-race calls.

Teams routinely lodge requests for incidents to be analysed, ranging from drivers being impeded in qualifying to race-ending collisions, not all of which makes broadcasts.

Additional vision can now be accessed by referring to the time of day, and/or lap number of a race, and the corner within Hawk-Eye.

"You just can't be in modern sport without technology," Baird adds.

"The teams and the players are so professional, everyone's got to go with it.

"I was very old-school in my decision-making. I kind of didn't want to pull a trap door on someone and then realise I was wrong later.

"There were times I could have gone 'right, the proportion of blame's on that driver, there's the small, medium or large penalty, but if I wasn't 100 percent sure, I was 'I think I'll just post-race it'.

"Like any sport, it should be played between the whistles."

The system was used in a range of deliberations throughout the Adelaide opener.

In Sunday ARMOR ALL Qualifying, three requests were made by teams to review drivers being impeded, and utilising Hawk-Eye technology, all were resolved within the 20-minute session.

That had two cases of 'no further action', while James Golding was handed a three-place grid penalty for a run-in with James Courtney at Turn 8.

Later in the day, Hawk-Eye was used to determine the wheels of Cameron Waters' Mustang and David Reynolds' Commodore interlocked at Turn 9 on the opening lap.

It was also crucial in assessing the controversial pitlane clash between Chaz Mostert and Rick Kelly.

Mostert was handed a drive-through penalty for an unsafe release from his Tickford Racing pitbay into the path of Kelly, during the scramble of Safety Car pitstops.

Baird also used the instant delivery of vision to determine that no blame should be apportioned to Kelly.

"It gave me the ability to look at it, 'was Rick at fault somewhere in there? Could he avoid something?' The answer was no.

"What people didn't see was just the momentum and element of surprise for Rick that created it. The last thing Rick wanted to do was break his car or Chaz's.

"From onboard with Rick, it happens so fast and he's off the throttle and onto the brake, but it's all over.

"You've got interlocked wheels and all sorts of stuff going on. And, again, I couldn't proportion blame to Rick. 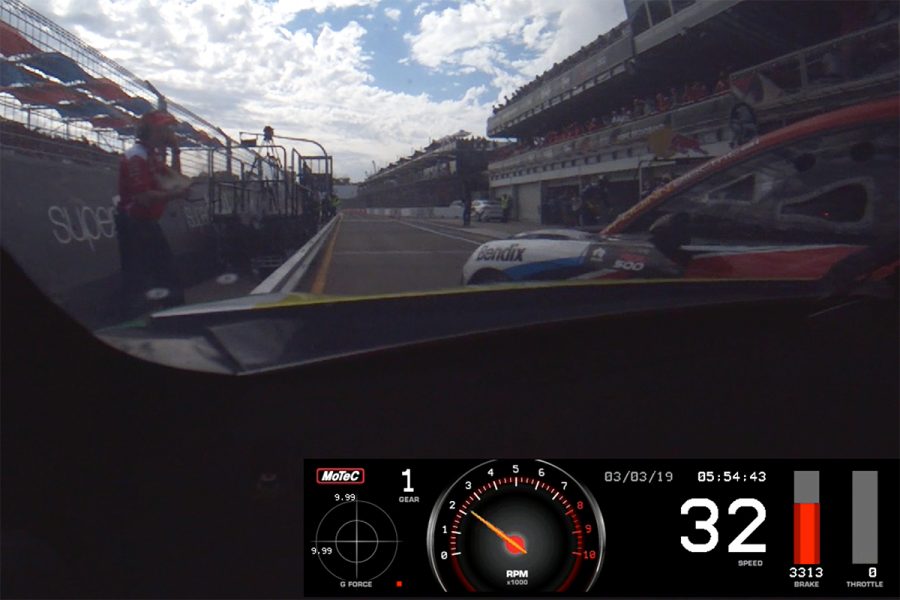 "Hawk-Eye helped me with that. It showed me the angle of Chaz's car when he pulled into his pitbay.

"He was on a red angle. Obviously he couldn't get into his pitbox square so there was no way he was going to get out of his pitbox when a car was parked in the one in front.

"There were all these elements of things I could look at and say 'am I proportioning blame to Rick Kelly? No way'."

That tied in with the existing streams of live telemetry collected by Supercars' motorsport department.

"This is the biggest thing people don't realise at home; we've got a technical crew that can get data from any car at any time," Baird said.

"But with Hawk-Eye, I also had four different angles of that incident in pitlane.

"I took into account how Chaz was parked, how Chaz had to leave, the positioning of the tyres from DJR Team Penske [in the pitbay ahead], there were all sorts of things.

"Chaz and Tickford put their hand up and said it was 100 percent their fault, but of course you still have people who say it's avoidable from Rick's point of view.

"I'll back Rick 100 percent on it, he was certainly on the brake and had no intent of trying to just continue through the accident." 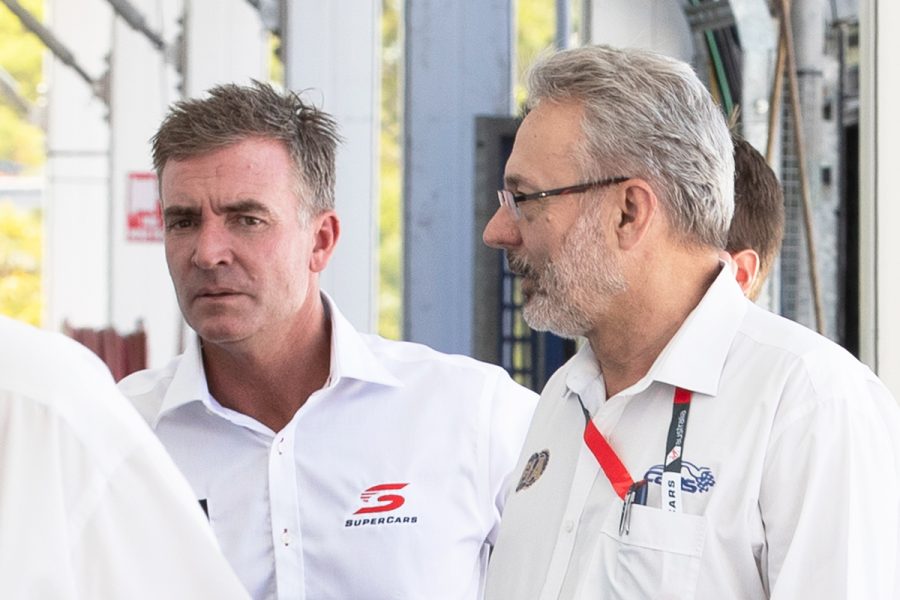 'Nobody likes a rugby ref either'

Even with more technology, Baird still has to make decisions that are, at times, not popular with drivers, teams or fans.

As Hawk-Eye staff build familiarity with Supercars drivers, cars and circuits, though, the efficiency of collating the vision that shapes his calls will only improve.

"Hawk-Eye are very committed to the program," Baird, above with CAMS Supercars steward Trevor Neumann says.

"They understand that in this era of any sport, accuracy is so important. It doesn't take out that some people agree with the penalty and some people don't.

"But if half are whinging and half aren't, then you've probably got it right, because half wear one hat, half wear the other.

"I've seen people look at tennis and Hawk-Eye doesn't lie but people still question whether the ball was in or out, and that's always going to happen. That's human nature."

The former Supercars and British Touring Car Championship racer and prolific GT ace took on the DSA role with Supercars in 2017.

He admits that before that even he would form his own opinions on incidents purely from broadcasts, without the tools now at his disposal.

"I honestly used to sit on the couch if I was watching a Supercar race and say 'oh, that's wrong' and blab on in-front of my mates," he said.

"But at the end of the day, if I was wrong, no-one really knew, it was only two or three of us on the couch.

"When you're doing it publicly and everyone wants to say you've got it wrong, it's very different.

"There's a very different pressure on a ref that's standing in the middle of a field to the experts sitting in his own armchair.

"No-one likes a rugby ref either. But a rugby ref's watching one ball.

"We have 24 balls running around the track and you might have 14 corners for 78 laps, there's a lot of things going on that we may or may not see.

"And even if something does go wrong, you can't blow the whistle. That's the biggest thing.

"You can't say 'hang on a second, the ref's not sure, he's blown the whistle, everybody stop and give Bairdo a little bit of time to come up with a decision, with some other people', and then when I'm happy with my decision, blow the whistle again and say 'OK, play on'.

"It happens so fast. There's so much going on and so many people. I'm scanning radios, I've got data, I've got vision.

"You've got teams communicating up through race control because their driver probably just got a bump and run but it's not on television, asking if I can find that.

"I've often said to people, I never knew what went on up there until I got up there. I just used to abuse them all and think they were sleeping and having a cup of coffee.

"There's that much stuff going on, it's quite mind-blowing.

"Hawk-Eye gives us the ability to – very quickly and without taking our eye off the rest of the game – get the vision required to make those decisions."

05/03/2019
Related Content
Hawk-Eye helped settle Waters/Reynolds clash  ›
04/03/2019
Mostert apologises to Kelly over pit clash  ›
03/03/2019
Supercars targets more in-race judicial decisions  ›
20/12/2018
Stay In The Know
Sign up to the Virgin Australia Supercars Championship Newsletter
We use cookies to ensure that we give you the best experience on our website. If you continue to use this site we will assume that you are happy with it.Ok