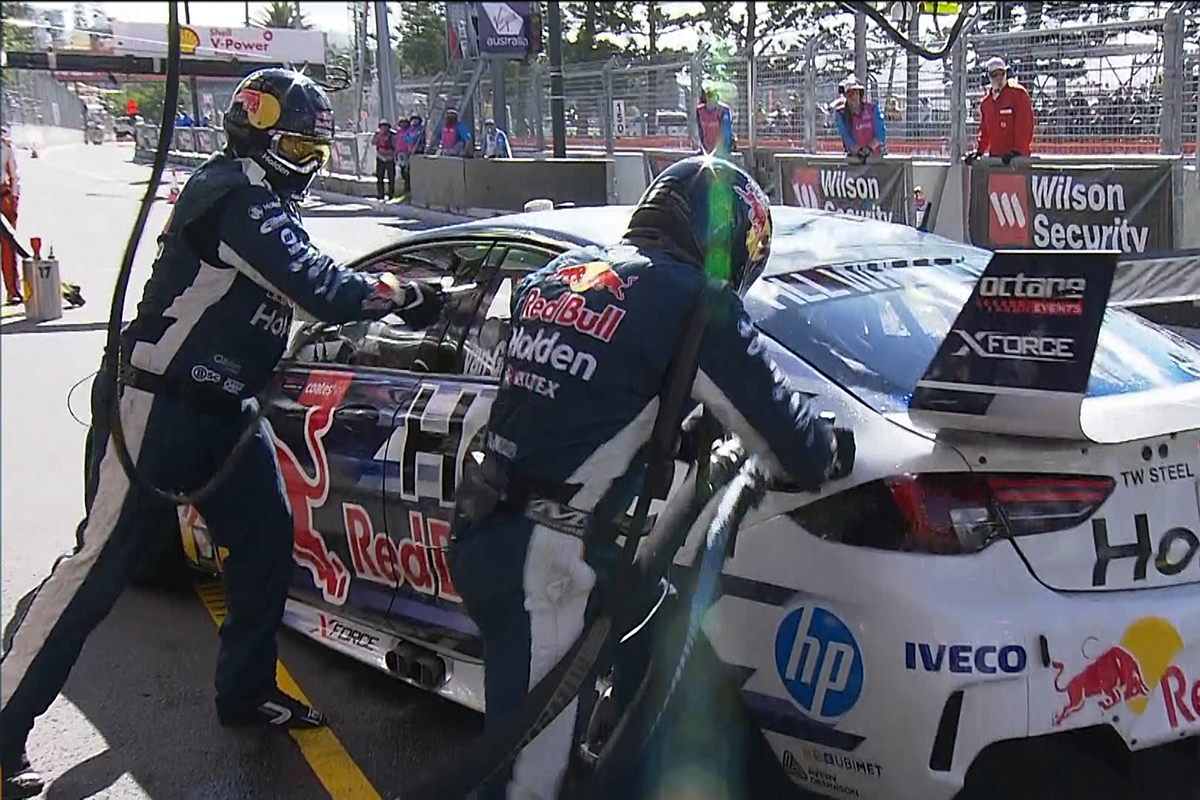 A bubble and a flinch triggered Shane van Gisbergen’s downfall in the Saturday race at the Coates Hire Newcastle 500, and dealt a major blow to his championship hopes.

Van Gisbergen was demoted from first to fifth in the Saturday result thanks to a 25-second time penalty issued on Sunday morning, dropping from two to 53 points behind Scott McLaughlin in the standings.

The Red Bull Holden Racing Team was deemed to have breached Rule D25.6.3.2, which states:

The rule is in place as a safety precaution, minimising the chances that a car will drive off with the fuel hose still attached, triggering a spill.

Television footage confirmed that the fuel coupling was still connected to the car when it returned to the ground – a fact not contested by the team in the post-race investigation.

The footage showed that the air spike operator removed the spike, therefore lowering the car off its hydraulic jacks, after the fuel attendant flinched.

Having noticed that the fuel coupling remained attached, the spike operator moved to reattach the spike, but then abandoned that move when he saw the coupling being disconnected.

While the Red Bull team refused to comment on the incident or penalty to media including Supercars.com this morning, the stewards’ summary noted:

“The Respondent confirmed that the system employed by the Team is that the air spike operator watches the body language of the fuel attendant and when he sees a signal that Refuelling is completed, he removes the spike and drops the Car.

“We were told that the “flinch” coincided with the refueller observing a bubble of air in the vent hose which suggested the tank was full.”

The pitstop was undertaken purely to meet the 140-litre fuel drop requirement, which had not been reached when van Gisbergen pitted under Safety Car the previous lap due to a lack of space in the tank.

An extra lap behind the Safety Car, in which van Gisbergen said he’d tried to “burn as much fuel as we could”, created just enough space for the drop to be completed by filling the tank.

The team later argued that the coupling was attached for longer than necessary to fill the tank and, therefore, fuel was no longer being transferred to the car when the air spike was removed.

It also argued that, even if fuel was being transferred, there is an implicit tolerance in the rule, based on the wording allowing for the car to be raised immediately so that fuelling can be completed.

The team argued that, as refuelling was completed, there was no reason to raise it back up again and, therefore, no penalty should be imposed.

In their summary, the stewards made it clear they were not satisfied that the team had rebutted the inference that fuel was continuing to be transferred.

“In our view, the fact that the fuel attendant continued to keep the coupling connected notwithstanding that he had apparently seen an air bubble in the vent hose (being a sign that the tank is or is approaching full) suggests that the fuel attendant was not confident that the tank was in fact full at that point and, for that reason, remained connected and then disengaged when he realised that the air spike had already been removed,” read their report.

“In our view, the apparent doubt on the part of the fuel attendant as to whether the tank was full tells against the Respondent’s submission that we should find that the tank was so full that hydraulic equilibrium had been reached.

“We therefore find the charge has been proved.”

The team also argued that, as the infringement was the result of a miscommunication between team personnel, any penalty should be applied to the team, rather than van Gisbergen.

Stewards concurred that the infringement was the result of a mistake and that no sporting advantage was intended, but stressed that “by permitting the coupling to remain connected while a Car is lowered allows the Car to take on more fuel than it otherwise could.

“The volume of fuel in this case may have been small but the outcome of the Race demonstrates the potential for fine tolerances in full volumes to affect the results.”

Van Gisbergen had overtaken McLaughlin for the lead two corners from the finish when the Shell Ford ran out of fuel.