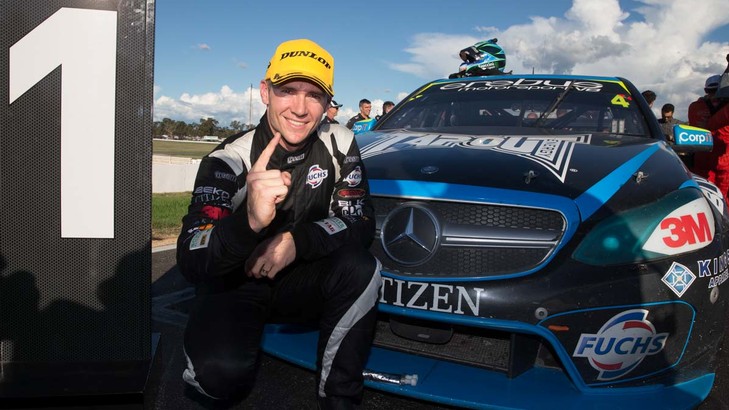 Lee Holdsworth expressed his genuine surprise with the sudden rise of Erebus Motorsport V8 after clocking the team's first win of their V8 Supercar campaign at Winton today.

Just days after a confronting home invasion last Wednesday night which played on his mind throughout the weekend, the ever popular and down to earth Holdsworth was in disbelief that his team could win so quickly after breakthrough off-season changes.

The changes included a decision to return their engine program in-house to the canny Kiwis Ross and Jimmy Stone, who owned the team prior to Betty Klimenko taking over for 2013, and key engineering breakthroughs.

"It has been a highly emotional 12 months," said Holdsworth.

"It's been so tough. We've had up but mostly downs. We came into this year with a much better car and it's actually caught me surprise that we have made that massive step over the break.

"I just didn't guess we would be winning a race at this time of the year."

Holdsworth admitted he struggled to stay focussed over the weekend after leaving his family the day after he chased an intruder out of their family home.

"That took a fair bit of my mind off what was going on this weekend. I have been so concerned about the safety of my family so to come out here and put that aside I am proud of myself.

"I am also very proud of what Erebus has achieved today. A race win and a very fast car. I am stoked."

"You guys all know she is out there," said Holdsworth.

"She is very different to the rest of us but she's awesome for the sport, bloody good to the fans with a massive following and she's good to work for. I'm in a very good space."

While Holdsworth won, Coulthard's first race victory and third on fading tyres in the second shot him into second in the Championship behind Craig Lowndes. It was a struggle for the entire day for Lowndes and his teammate Jamie Whincup, who is now third in the points total. Click here for Championship points.

Coulthard had a tremendous first race to score his first Championship win of the season and claw back valuable points on Lowndes who was to start the second race way down the back of the grid, along with Whincup.

Multiple incidents after a relatively clean start led to three successive safety cars and four cars – three of them Walkinshaw Racing Holdens – victims of the series of crashes. Tim Slade and James Courtney both out of the race while Nick Percat had damage but returned.

Nissan's Todd Kelly and Rick Kelly were in the wars while Repair Management Australia's Russell Ingall tore through the field having taken a fresh set of tyres on the first safety car, climbing from last to sixth at one point.

Ingall was driving like a man possessed, pushing cars out of his way right and centre. He was consistently quicker than anyone else late in the race and worked himself into third, passing Jason Bright and Dale Wood on one corner and Craig Lowndes two corners later.

Likewise Winterbottom tore through the field in his Falcon, from 23rd to seventh, salvaging a poor first qualifying for Pepsi Max Crew FPR.

Ingall's world, though, came crashing down he received a drive-through penalty for one of his 'push to pass' moves, a shame for the veteran who has a renewed lease on life this year. For the second time in the race he tore through the field once again, from seventeenth to tenth in three laps.

An emotional Ingall, who dropped to 15th but managed to fight back to finish seventh, was mystified why he was singled out for the only drive-through in a race full of collisions and incident.

"Judge it on its merits," Ingall told v8supercars.com.au. "At least let us have a voice afterwards. Once you throw that flag out you've buggered our race. She's gone, we are screwed.

"There is nothing we can do, we can't get the result back. You can't say 'we will give you your second or third place back'. They should look at it afterwards."

If he had finished on the podium it would have been LDM's first podium and best ever result.