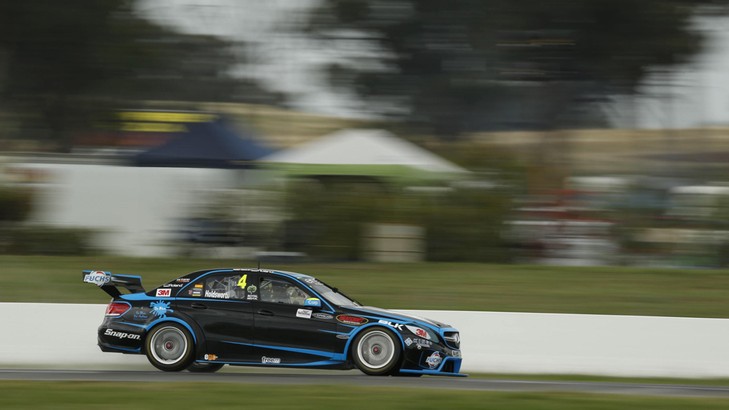 Lee Holdsworth admits a shocking home invasion occupies his mind as he attempts to put his Erebus Motorsport V8 Mercedes-Benz on the podium for the first time.

Holdsworth and his young family were confronted by an intruder in their home on Wednesday night, the day before he travelled to this weekend’s Winton 400.

The intruder was discovered by Holdsworth’s wife in the bedroom of their new home at around 10.30pm. Holdsworth was in the shower and when hearing her screams raced out naked to confront the would-be burglar.

With additional security in place to watch his family over the weekend Holdsworth recorded Erebus’ best practice result at the Winton 400. He was second to Lockwood Racing’s Fabian Coulthard and in front of VIP Petfoods' Shane van Gisbergen.

Holdsworth believes the times may only get better as he attempts to set aside thoughts of home.

“It’s certainly hard trying not to think about it during the day but I need to put it aside, jump in the car and get the job done,” Holdsworth said.

“I still reflect on it but thankfully they are fine and being looked after. It’s funny how you react in that situation. I would have done anything to that guy had I had the chance.”

Holdsworth described grabbing a baseball bat, while naked, given to him in Texas last year when V8 Supercars raced in Austin before chasing the intruder out of the house. The intruder escaped on foot.

“Being naked I am sure he would have got as much of a fright as we did,” he said.

Holdsworth believes his AMG E63 is so improved this last year that regular podiums are possible.

“We can be on the podium, certainly in the top 10 regularly. It was very much flash in the pan last year but now we are a lot more consistent.

“We have a much better car than we finished last year with. We have made big gains with the car and found everything we have been searching for.

“If we get everything right on the day anything’s possible.”

Coulthard is also looking for his first Championship podium of the year as he sits third and just 85 points behind leader Craig Lowndes, despite conditions today that appeared to change lap by lap.

In changeable conditions practice day today was a jumbled affair from session to session but in the final session the lap records tumbled dramatically.

“It was a strange day. At times the first couple of laps the car felt unbelievable and then the next few laps it was awful. Hopefully we have seen the last of those conditions and it will be good racing.”

Van Gisbergen was in awe of the conditions as sealant used to patch some holes and cracks on the track appeared to put an additional layer of grip over the top.

“It feels like I’m driving a Formula One car!” Van Gisbergen declared over the radio, after having told engineer Geoff Slater earlier the track was "really grippy".

Craig Lowndes, Slade, Jason Bright, Jamie Whincup, Rick Kelly, Scott McLaughlin and Will Davison made the top 10 – making Ford the only manufacturer not to feature.

Others to note include the first Falcon home David Reynolds in 13, Mark Winterbottom 19, Garth Tander 20 and James Courtney 22.

The Nissan Motorsport quartet were strong during parts the day at the track that they had an historic 1-2 finish on the Saturday at last year. Repair Management Australia’s Russell Ingall, tenth in the Championship, also featured early, topping practice two in damp conditions.

A Mercedes (Will Davison) and a Nissan Altima (James Moffat) clocked the quickest times in the first practice. Davison shot to the top of the times in the closing seconds, to knock off last year’s winning Norton Nissan by just 0.2 of a second.

The V8 Supercars hit the track for back-to-back 10-minute qualifying sessions at 11am, with two 100km races around Winton to follow.