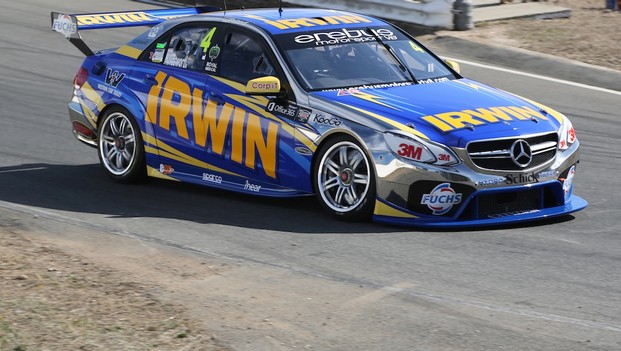 Though IRWIN Racing’s Lee Holdsworth’s Mercedes-Benz AMG E63 V8 Supercar sat in thegarage for the majority of Practice One, the 30-year old is hoping to qualifyin the top half of the field today.

The goal is to comeaway from this weekend's Tasmania Microsoft Office 365 with a straight car, learn some more and see an improvement across the weekend.

“We’re only trying totake baby steps at the moment, and not big chunks of time, because you can loseyour way pretty easily in this sport,” Holdsworth said after practice.

Throughoutyesterday’s sessions, the car improved and Holdsworth ended the day 15th fastest – a result he was happy with.

“At the moment I’m very pleased – we’remaking gains every time we hit the track, which is our goal,” he said.

Early on the car struggled with an“electric gremlin” the team couldn’t fix until after the first session, leavingthe Mercedes in the garage after completing just one lap.

Holdsworth has accepted there will beteething problems with his new vehicle, and stayed positive about theelectrical issue, saying he would rather be affected during the practicesession than one of the weekend’s races.

“To get on top of that stuff early in aweekend was good,” Holdsworth said. “We still had two more sessions afterward,so we made the most of them.”

With Symmons Plains being a high horsepowertrack, Holdsworth didn’t have high expectations for the weekend. “We thoughtthis was going to be our big downfall, but we were surprisingly pleased.

“It doesn’t take much to find a couple oftenths – hopefully we can qualifying in the top half of the field, that’dbe our aim.”

Looking to the near future, Holdsworth hassaid the tight turnaround to the New Zealand event next weekend was a bit of anegative for the team – though as a driver, it means staying in the zone.

“We’re waiting on some upgrades for theengine so I guess (the turnaround) is a negative – we don’t have time to doanything between the two rounds.

“But then for me and other two guys, Tim (Slade)and Maro (Engel), it’s a positive because we can jump straight back in nextweekend and we know what we need to change already. We’ve got the feel of thecar and don’t need to do laps to get used to it again.

“For the team we want to come away withthree straight cars and make sure they don’t have too much work out of Tassie.”

Holdsworth feels as if the car is capableof 15th and was pleased with that number yesterday. “I feel like Igot the most out of the car and it’s pretty close to the mark – but withthe engine upgrades coming, I think we’ll make some pretty big gains.”

The V8 Supercars have a fourth practicesession this morning at 9.30am, before qualifying at 11.50am and Race Three ofthe Championship at 2.45pm.

Lee Holdsworth  ›
15' Erebus Motorsport ›
2013 Tasmania Microsoft Office 365  ›
Stay In The Know
Sign up to the Virgin Australia Supercars Championship Newsletter
We use cookies to ensure that we give you the best experience on our website. If you continue to use this site we will assume that you are happy with it.Ok