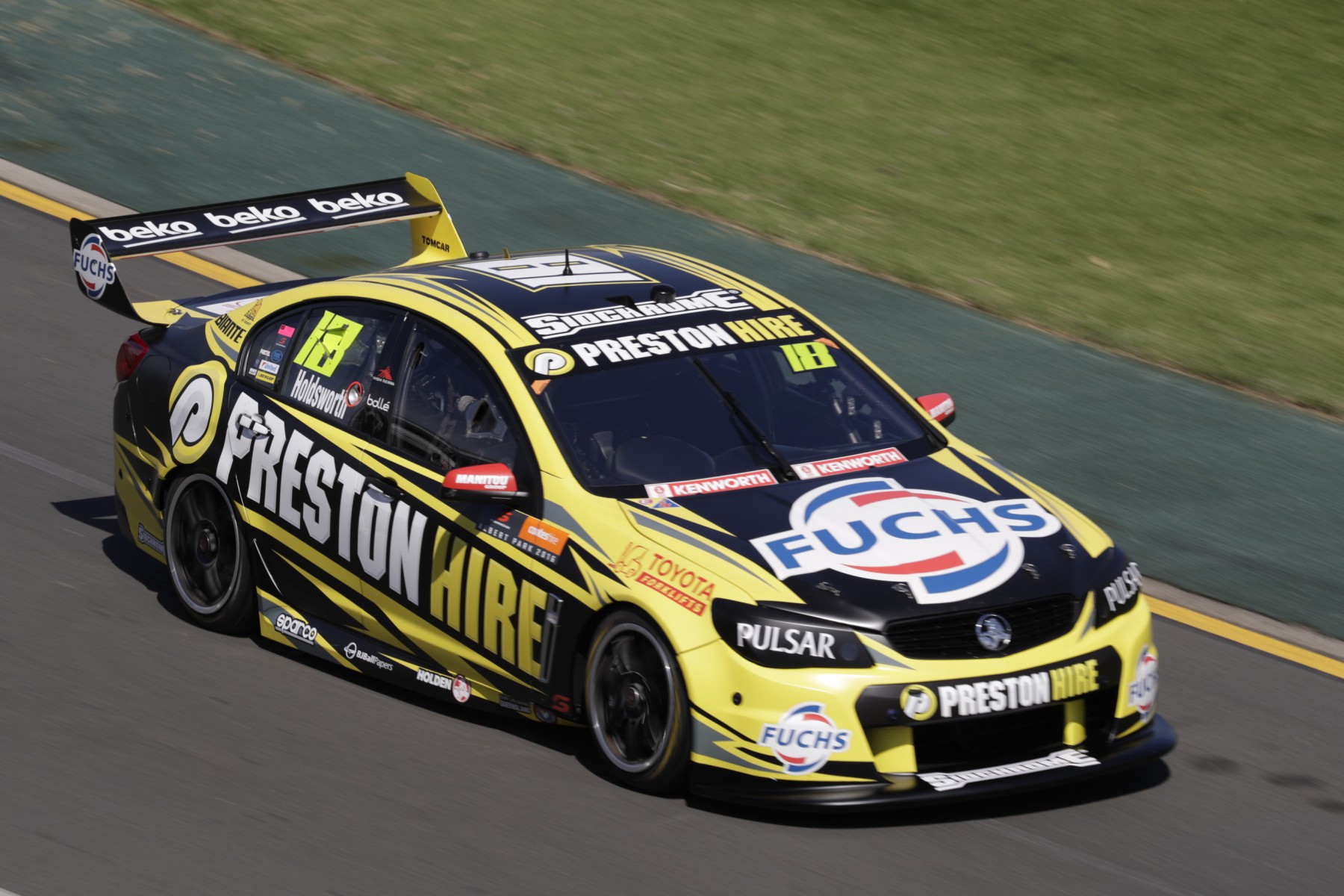 This weekend’s non-championship hit-out at Albert Park is being treated as a crucial step towards competitiveness for Preston Hire Racing as the rookie team learns its way and driver Lee Holdsworth his new Holden Commodore VF.

Holdsworth has even warned there might be the odd spot of ‘gardening’ over the next few days as he pushes the limits of his ex-Triple Eight Race Engineering Holden at a racetrack with plenty of run-off room, unlike the Clipsal 500 where Charlie Schwerkolt’s new team debuted two weeks ago.

“This weekend is going to be a real test for us because you can push as hard as you want and if you make a mistake around here then you roll off into the dirt and come back on,” Holdsworth told v8supercars.com.

“We will hopefully work out a baseline set-up that we can take to Tassie and the following rounds after that.”

Holdsworth admitted he lacked confidence in his car at the Clipsal 500. He qualified 19th, 15th and 20th and finished 23rd, 21st and 18th in PHR’s debut outing at the tough Adelaide parklands circuit two weeks ago.

The experience exposed issues many issues for many aspects of the new single-car operation, which was pulled together by veteran team manager Jeff Grech over the summer after Schwerkolt’s customer deal with Walkinshaw Racing ended after just one season.

“I had no confidence to push hard and that is a track where you can’t push unless you have confidence,” Holdsworth explained. “So I felt there was still time left in me and the car, but the set-up wasn’t right for me.

“I wasn’t willing to put it all on the line and make up two tenths when we were six tenths off the pace.”

The #18 started Clipsal with a baseline set-up supplied by T8 that emulated Jamie Whincup’s mechanical balance. However, because it is still building up inventory, PHR lacked set-up options to provide the roll stiffness Holdsworth wanted.

That’s one problem that has now been rectified and will be tested out at Albert Park during the Formula 1 Rolex Australian Grand Prix.

“That is a key focus for this weekend,” confirmed Holdsworth. “To find a baseline for the car that suits me and find some speed that will carry us through the rest of the year.”

He qualified 20th for today's first race at the grand prix, with practice results 21st and 23rd yesterday.

Holdsworth revealed a series of team meetings since Clipsal have sorted through a lot of the issues and many changes had been made.

“I can honestly say even coming in to this round (the AGP) the amount we have learned and acted upon is huge,” he revealed. “We have learned a hell of a lot.

“We learned something on every level of every department; from my point of view I learned a lot about the car; as a team we learned the level of preparation wasn’t good enough.

“But no one is to blame for that, we just didn’t have enough time to get the proper level of preparation that we needed.”

Holdsworth also nominated a need to foster the relationship with technical supplier Triple Eight as another Clipsal learning, as well as improvement of pit stops, which are conducted with Brad Jones Racing crew because PHR shares a boom with Tim Blanchard’s CoolDrive Commodore.

“Being a small team it is just so important to have all the processes in place for each session, to have the plan right,” Holdsworth explained. “For everyone to know their job and do their job and that’s what we took away from Clipsal; people understand what their role is now and probably didn’t have the level of understanding of that before Clipsal.”

Holdsworth revealed that having Grech as car controller in pit stops as he famously did in his days running the Holden Racing Team, hadn’t worked well at the Clipsal. It is likely that will change for the next championship round in Tasmania.

The AGP will act as a preview for that new structure, as there are no pit stops in the four races, which will allow Grech to work much more closely with team engineer Jason Bush.

Holdsworth was realistic about the rate of progress the team would make.

“It’s not going to be something that happens overnight and will click overnight,” he said. “We are a brand new bunch of workers in this team; I am new to the car, Charlie is new to running a team.

“So it is going to take time, but I think the step we have made from the Clipsal to here is huge. We are really focussing on areas that we can improve and if we continue to do that then we will keep moving up and keep improving every aspect of the team.”