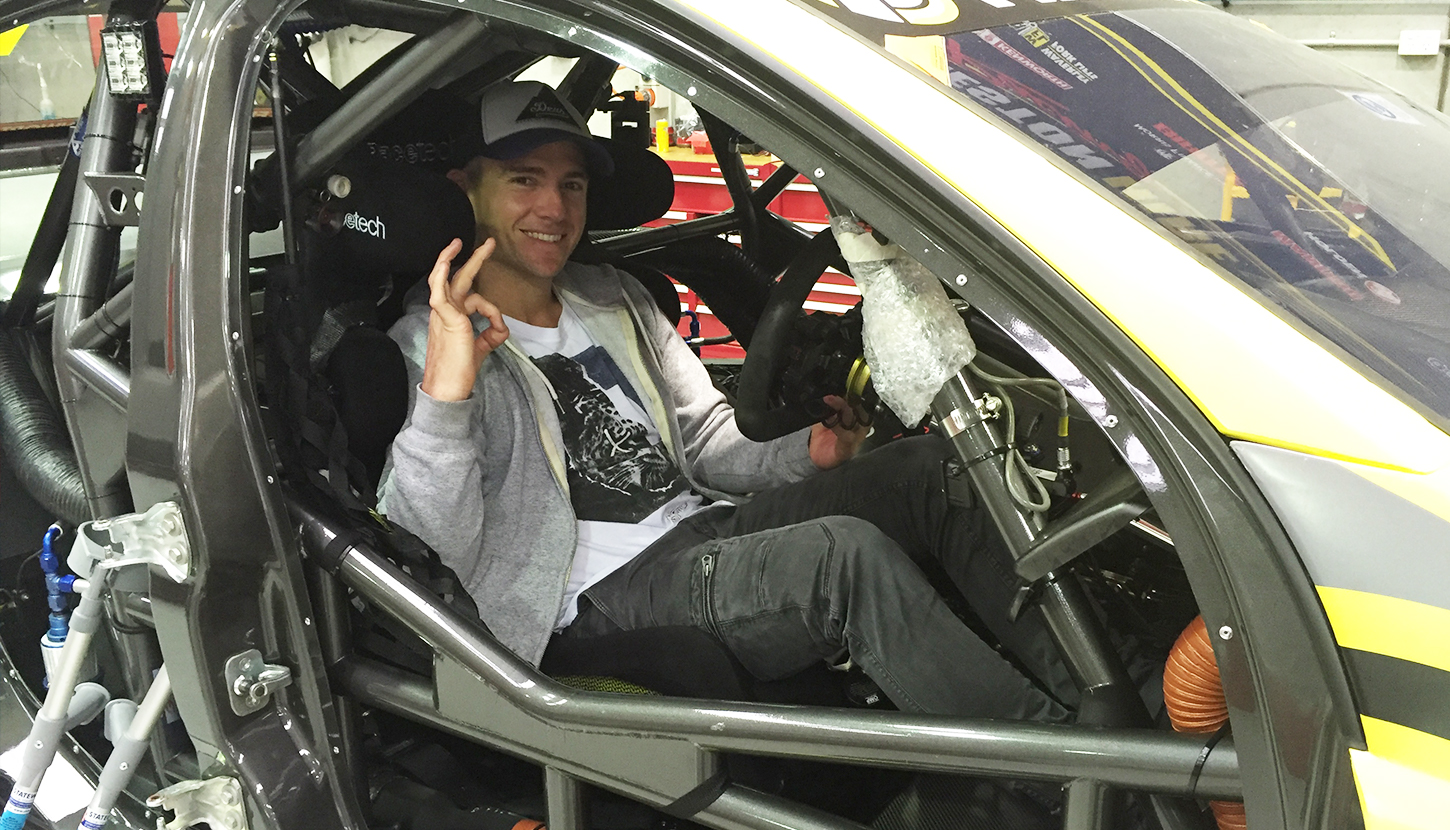 A “stoked” Lee Holdsworth has been given the all-clear to throw away his crutches and make his racing return at the Wilson Security Sandown 500.

Holdsworth, who fractured his pelvis, two ribs and damaged his knee in a massive 95g car-wrecking shunt in Darwin in June, is expected to make his comeback with at least a couple of laps at Monday’s shakedown of his new Preston Hire Racing Holden Commodore VF at Winton.

He should then do more laps next Friday morning in practice for the Red Rooster Sydney Motorsport Park SuperSprint before Karl Reindler takes over duties.

Holdsworth is expected to participate in the ride sessions at SMSP the Monday after the event, then test his new Triple Eight Commodore at Winton in early September with Pirtek Enduro Cup co-driver Reindler in preparation for his racing return at the September 16-18 Sandown classic.

Holdsworth sat in his new car for the first time today at the Charlie Schwerkolt-owned rookie team’s Melbourne workshop before heading off for his latest round of scans.

“I am very, very good,” Holdsworth told supercars.com shortly after getting the green light from his specialist. “I have been told to ditch the crutches, get walking and practicing and get racing at Sandown.

“I am stoked, I was actually a bit emotional when he told me because it has just been such a really long process.

“It’s only been nine weeks but it feels like it has been six months, just seeing another round going by every couple of weeks and you just feel further and further away from it.

“But now I am back and I couldn’t be happier. I haven’t had good news like this in a while.”

Holdsworth, who has been in Port Douglas for a week on holiday with his family, said the purpose of sitting in his new car this morning was to make sure he was comfortable before his Monday laps, which is expected to be in addition to Reindler’s official 20 lap shakedown.

“I was keen to jump in it before Winton, I just wanted to make sure the seat position is right,” he said.

He said he was confident he would be able to dial back into racing and be fully competitive.

“I was a little concerned how I would feel getting back in the car just with the brake force going through my knee, but jumping in the car this morning felt really comfortable and pushing the brake pedal to a force I will use on the track was no dramas.

“So I actually feel really good in the car. But the big test is when I get in it and do a few laps and see how I put up with the vibrations and the bumps and kerbs.

“But really I don’t think there will be any issues. I think the main thing for me will be making sure I don’t get cramps because I haven’t been using that very much at all and that’s something I am going to have to work pretty hard on over the next the weeks before Sandown.”

Schwerkolt said he was delighted with the good news and to see Holdsworth sitting in his new car.

“It’s so exciting to have a new car and Lee is blown away by the finish of it,” said Schwerkolt. “Triple Eight have been fantastic as usual with the quality of their work.”

Schwerkolt also heaped praise on his personnel, who have split their time in recent weeks between home base and Triple Eight’s Banyo shop in Brisbane to build the new car.

“Our little team has really punched above its weight,” said Schwerkolt. “Half the team has been living in Brisbane and working at Triple Eight and they have been doing just about everything there – eating, sleeping and working. So they have been fantastic.

“Our staff have really kicked in and got this car built, so it’s a really great credit to them what has been achieved.”

Schwerkolt said his brief to Reindler next weekend was “to look after the brand new car”.