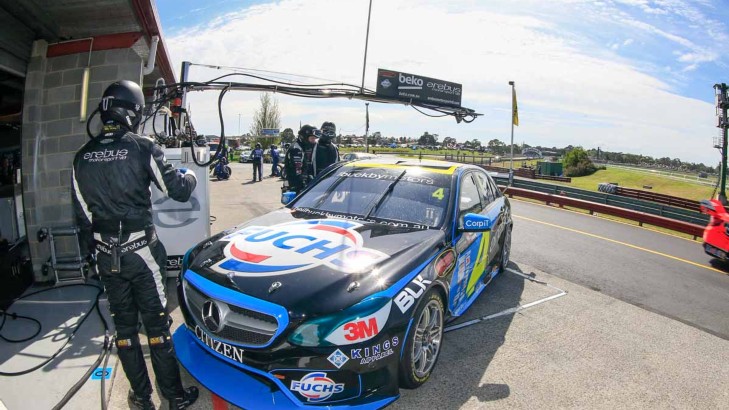 Erebus Motorsport has elected to repair the #4 Mercedes Benz E63 AMG that was involved in a huge smash during the recent Wilson Security Sandown 500.

Driver Lee Holdsworth described the crash, said to be over 260km/h at the Victorian circuit, as the biggest of his career and while the car appeared to be heavily damaged, once the team assessed it at the workshop they found there was no damage to the chassis and could be repaired in time for the Supercheap Auto Bathurst 1000.

"The boys are hard at work trying to get this thing ready for Bathurst," Holdsworth said on the team's Sandown wrap video.

"Incredible that they're actually going to get it back on track. We're replacing a couple of bars - obviously there was a bit of damage - but we've come pretty well out of it.

"I don't think after that crash we could've guessed that the car would be back for Bathurst."

Holdsworth praised the design of the new generation V8 Supercar, which absorbed the impact and allowed him to walk away from the crash with no injury.

"It's a credit to the car of the future really, how well these cars are built," Holdsworth said.

Erebus Motorsport runs a safety cell in the car, which is not mandatory, but Holdsworth believed had a positive effect.

"It' a big carbon tub basically, and I can honestly say I felt like it saved my life - There was a moment there I thought I was staring death in the face.

"I've come out of it with no injuries at all and I'm feeling pretty good."

The disappointing thing for Holdsworth - who achieved Erebus' best finish of 2013 at Sandown last year with Craig Baird, the two coming home fourth in the Merc - was that the car felt good enough to repeat a similar result before the late-race drama.

"For 95 per cent of the weekend I had a really good car, a top five or six car, so I was really disappointed we didn't end up with a result. It just makes us want it more at Bathurst I guess," he said.

Even after the accident, Holdsworth mused that the result could help motivate the team for a result at next month's Supercheap Auto Bathurst 1000.

On the other side of the garage, it was also a tough run for the Davison brothers. With Alex's recent experience running full-time in V8 Supercars, there was potential for the #9 to threaten - but an odd problem affected the duo.

"Alex lost all information on the steering wheel, which isn't ideal, but is manageable," Will said.

"He carried on for 15 laps, no dash, and we would've happily gone to the end of the race with that.

"The problem was, we had no telemetry back in the garage either, so all the engineers were flying blind. We had no warning lights, no temperature readings, no fuel numbers for the (team to) calculate for the pit stop - so effectively impossible to continue the race like that."

Similarly to his teammate, Will could only look forward to the Supercheap Auto Bathurst 1000 - a race he has won before, back in 2009 with Garth Tander.

"Every race is a different kettle of fish so after the last two at Sydney Motorsport Park and Sandown, two totally different weekends we can really culminate what we've learnt and understand what sort of car we need at Bathurst," he said.

Will Davison  ›
15' Erebus Motorsport ›
2014 Supercheap Auto Bathurst 1000  ›
Stay In The Know
Sign up to the Virgin Australia Supercars Championship Newsletter
This website uses cookies to improve your user experience. By continuing, you will be providing your consent to our use of cookies.Ok