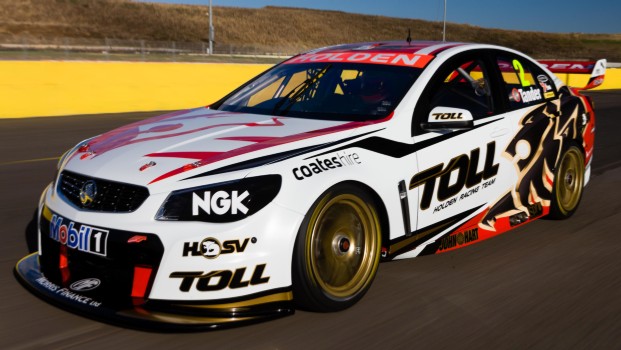 Tander and Courtney revealed a spectacular car presented in a striking new livery to match VF Commodore’s stylish look, the scheme highlighted by the return of the traditional Holden Lion to the bonnet for the first time in three years.

"With VF Commodore, we wanted to create a fresh statement and strived for a combination of precise cutting-edge graphics and an instantly recognisable HRT look and presence. HRT traditions infused with a contemporary execution,” Hughes said.

“We wanted to keep VF’s the bold front graphic design as pure as possible, so the whole front end remains predominantly white.

“The imposing black and gold HRT logo dominates the side of the car while the return of the Holden Lion on the bonnet is something all HRT fans will love. The rear of the car completes the new look in a brilliant bright red.”

“We're all pretty stoked with how the new HRT VF Commodore has turned out, and can't wait to see how Holden fans react to the new look when it’s on track at Clipsal," he said.

Holden Motorsport Manager, Simon McNamara said today marked the first time in Commodore’s 35-year history where the racing variant had been revealed so close to the road car’s debut.

“Holden’s plans for VF Commodore and V8 Supercars’ new regulations combined to present Holden Motorsport and our teams with a challenge to go where we have never been before,” McNamara said.

“To design, develop and build new race cars well ahead of when the road car begins production has been a difficult test, but today’s unveiling shows the true spirit of Holden’s winning tradition.

“Just one day after the most technically advanced car to ever be built in Australia has been revealed, HRT has presented the most striking racecar Commodore ever.

“The Holden Racing Team’s VF Commodore is truly a class above.”

“I am tremendously satisfied with the role which Walkinshaw Racing played in that program, and I would like to make particular mention of our Chief Designer Doug Skinner and Operations Manager Adam Laws, and their teams in getting us to this point.

“With Car Of The Future it is a new era for our sport, so today not only have we unveiled an outstanding new racecar, we have also begun an exciting new chapter in the storied history of the Holden Racing Team.”

“The new VF Commodore looks fantastic – it’s very different to VE and marks the beginning of a new chapter in HRT’s history,” he said.

“We had a lot of feedback from our supporters who wanted to see the Lion back on the bonnet, and it’s great to be in a position where we’ve been able to do that.

“With such a major change in the car and the technical package, I’m hesitant to make any bold predictions for this season but I’m confident in knowing that everyone at HRT has put their absolute maximum effort into this year’s preparation.”

“It’s a massive step forward and I think everyone will be proud Australia can produce such a great looking car.”

HRT’s continued pursuit of success has led to an engineering reshuffle across the two cars. Scott Sinclair will manage Tander’s #2 VF, accompanied by engineer Jason Bush; Courtney’s #22 HRT Commodore will be managed by Rob Starr and engineered by Alastair McVean.

“It’s a very strong engineering mix,” Courtney said. “Alastair is very analytical, while Rob is more hands-on, so combined they will help us to make the most of the new Commodore.”

HRT’s 2013 sponsorship arrangements were also confirmed; major sponsors Holden, Toll, Mobil, HSV, NGK, Continental Tyres and Coates Hire are all continuing their successful relationships, while a number of partners have been welcomed to the team.

HRT also welcomes a new transport partner, Scania, with the team’s VF Commodores transported around Australia by the only V8 truck in the paddock.

HRT has notched up a record 200 all-time race wins, along with six championship victories and seven Bathurst triumphs.

In 2012, it finished fourth in team points with Tander seventh and Courtney 10th in driver standings.

The HRT VF Commodores will make their track debut on Saturday, 16 February for the Official Pre Season Test Day at Sydney Motorsport Park, ahead of the first event of the 2013 Championship, Adelaide’s Clipsal 500, 28 February-3 March.