The 18-year old West Australian steps up to the Virgin Australia Supercars Championship from the Dunlop Series, bringing his own NewGen car to the fold and tackling one of the toughest events on the calendar.

Dealing with the aftermath of Holdsworth’s accident has been a challenge for the new-for-2016 team, but the single-car operation is on track this weekend and focused on putting its best foot forward.

“The past few weeks have been pretty tough given we are such a small team – we all built the team together, Lee included – so when he got hurt it had a big impact on everyone,” engineer Jason Bush told supercars.com.

“He was so keen to make sure we kept moving forward and continued our learning, we actually did our Darwin debrief in his hospital room in Melbourne.”

The team is keeping expectations in check this weekend, with focus on helping Kostecki make the most of his main game opportunity.

“It’s an incredibly tough series and we are going in with a rookie who has never driven on soft tyres,” Bush said.

“Ultimately we want a clean run for the weekend and to fast-track Kurt’s learning. Compared to a normal Dunlop Series weekend, he gets more track time, tyres, race stints and the ability to compare himself to the best drivers in Australia – so our goal is to give him the tools to improve each time he goes out.”

The Preston Hire Racing engineer explained the ins and outs of the Townsville circuit. 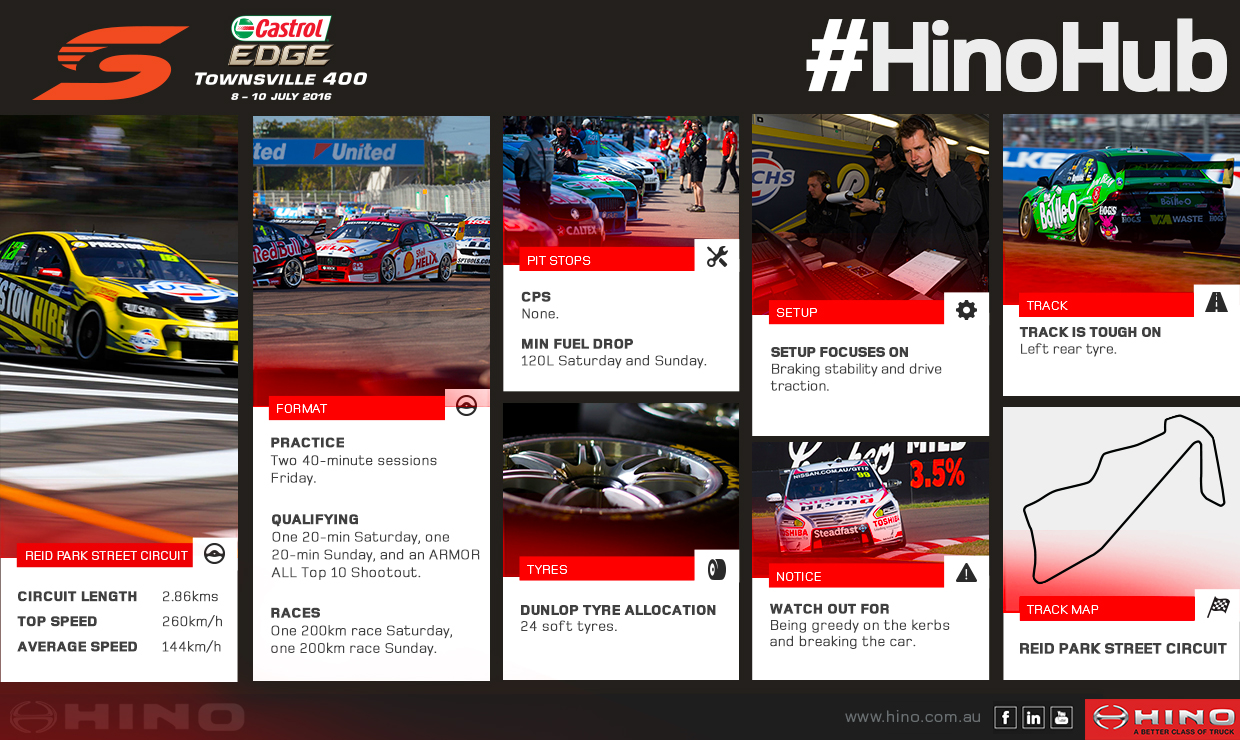 The Townsville track is a hybrid of public road and permanent racetrack, which Bush says gives it three “personalities”: “The 90 degree brake/turn/go nature of turns 2 and 3; the high speed change of direction of turns 4 and 5; and then the short entries, with long punishing traction zones on the corner exit, for the rest of the lap.”

Similar to other street circuits on the calendar, there is more emphasis on braking and drive grip than cornering potential.

“There is a lot of time to be made with a car that rides the kerbs well – generally the first three-quarters of the lap require the driver to use the apex kerb to open up the corner or lean on the exit kerbs heavily to get a good lap time.

“With Kurt reasonably inexperienced around Townsville, I think that will be an area he will have to sneak up on – especially since hitting them incorrectly or not taking enough kerb can cause quite a bit of steering and suspension damage.

“The good thing about Townsville relative to other street tracks for Kurt is generally the driver doesn’t have to rub the walls to get maximum lap time – so there is a margin of error as he gets up to speed.”

Though Kostecki will steer his regular Dunlop Series Supercar, the Preston Hire Racing team has completed the necessary updates to race in the Virgin Australia Supercars Championship.

“The general feel of the car will be the same as Kurt had at the last race in Barbagallo in May,” Bush said.

The left rear tyre and all four dampers are the things that hurt the most by the end of a weekend in Townsville.

“While the track is 65 per cent right handers, the main traction zones  – turn 8/9 and turn 11/12 – are right handers, which put a lot of strain through the left rear tyre. Conversely the right front tyre is more or less on a holiday.”

Bush was the performance engineer for Garth Tander in 2013 when Holden Racing Team recorded an impressive 1-2 finish, with second placed James Courtney finishing nine seconds ahead of third placed Shane van Gisbergen. Looking after that right front was the key.

One of the challenges for engineers this weekend is getting the car rotated quickly while looking after the rear tyres on exit.

“It’s not a matter of giving the car lots of front grip at the cost of rear, but conversely you can’t get set the car up with a rear grip balance as the entry and mid-corner speeds will be too low.”

Stepping up from the Dunlop Series means Kostecki has never before raced on the soft Dunlop tyre.

“I don’t think this will be a big thing – when the soft tyre first came out it seemed to help the younger drivers in that it gave more feel and feedback about what the car is doing,” Bush said.

“The flip side of the soft tyre is the increased tyre degradation, which is something we will have to help Kurt manage over the course of the weekend.”

While Townsville is not a high degradation circuit, teams will need to adjust their thinking coming from Winton and Hidden Valley, which were both recently resurfaced.

“For Kurt, the key to managing the degradation will be his driving style – learning how to maintain the lap-time while looking after the left tyre will take time and we don’t expect him to pick it up on his first day of school.

“All things going as expected, over the course of the weekend he will get six stints, so we hope to see gains in every stint.”

Teams have two sets of pre-marked tyres at their disposal for the two 40-minute practice sessions, as well as the new set that must be handed back before qualifying.

“This is the first event for the year where Saturday and Sunday races are 200km – we expect to use three sets of tyres each day for qualifying and racing.”

Two 40-minute sessions on Friday is all the time Kostecki has to get up to speed. “Practice 1 will be all about giving Kurt the time to get comfortable in the Preston Hire Racing Commodore,” Bush said.

“The car won’t change much over the course of the session and we will use what data and timing information we have at hand to help Kurt’s progression in the car.”

In the second session, the team will start to steer towards car performance and balance.

“We will do a run on the brand new hand-back tyres at the end of Practice 2 – I imagine the whole field will, since there is no Practice 3 on Saturday morning.

“From this green tyre run, we will get an idea on car balance and tyre pressures, and Kurt will get his first taste of a soft tyre in qualifying mode. This will let us know where we stand and the areas of the circuit we need to work on for Saturday.”

Watch out for qualifying lap records this weekend – it will be the first time the Supercars qualify on soft tyres in Townsville, though it was used for racing in 2013 and ’15.

“The last few years at Townsville on the hard tyre saw a lot of cars split between the first and second lap as their quickest, however I imagine this year will move to be first lap with the soft tyre,” Bush said.

“Typically on street circuits the issue is getting the tyre warming phased correctly so that you have the front tyre working from the start of the lap and have the rear tyre last.”

Those focused on making the ARMOR ALL Top 10 Shootout on Sunday will need to plan ahead.

“The Shootout takes place two and a half hours after qualifying finishes so the car will be completely cold – no brake temp, no tyre temp,” Bush explained.

“That will challenge those who are struggling with their tyre phasing and could mean some choose to fit ‘roaded’ or used front tyres with new rear tyres for their single lap. This will need to be built into the tyre plan for the weekend.”

Both races are the same format – 200km with the 120L minimum fuel drop, which means at least two pitstops.

“The quickest way to do the race is three equal stints of 23-24 laps, however for track position people tend to stop earlier in the windows,” Bush said.

“Expect the fuel consumption to be around 2.01kg/lap, which will get around 42 laps.

“From lap 28 teams should be able to make it home and, if they can get the fuel in, I would expect to see people take a Safety Car from lap 24 onwards.

“One of the bigger strategic decisions is how much fuel to put in at the first stop.

“At lap 15, for example, you can put between five seconds (which gets you to lap 28) and 21 seconds (to fill the tank), so you can use the fuel time to dictate where you come out for the middle stint.”

For a street track, there hasn’t been a lot of safety car intervention in recent years.

“The past three years has seen only six Safety Car deployments, giving an average of one every 217 km of racing, which is must less frequent than the 129km per S/C for 2013 to 2015,” Bush said.

“If there was a lap one Safety Car, expect to see the whole field stream into the pits like Darwin.

“As bad as double stacking is on lap one, staying out means you are down one pitstop and half of the fuel drop to your competitors.”