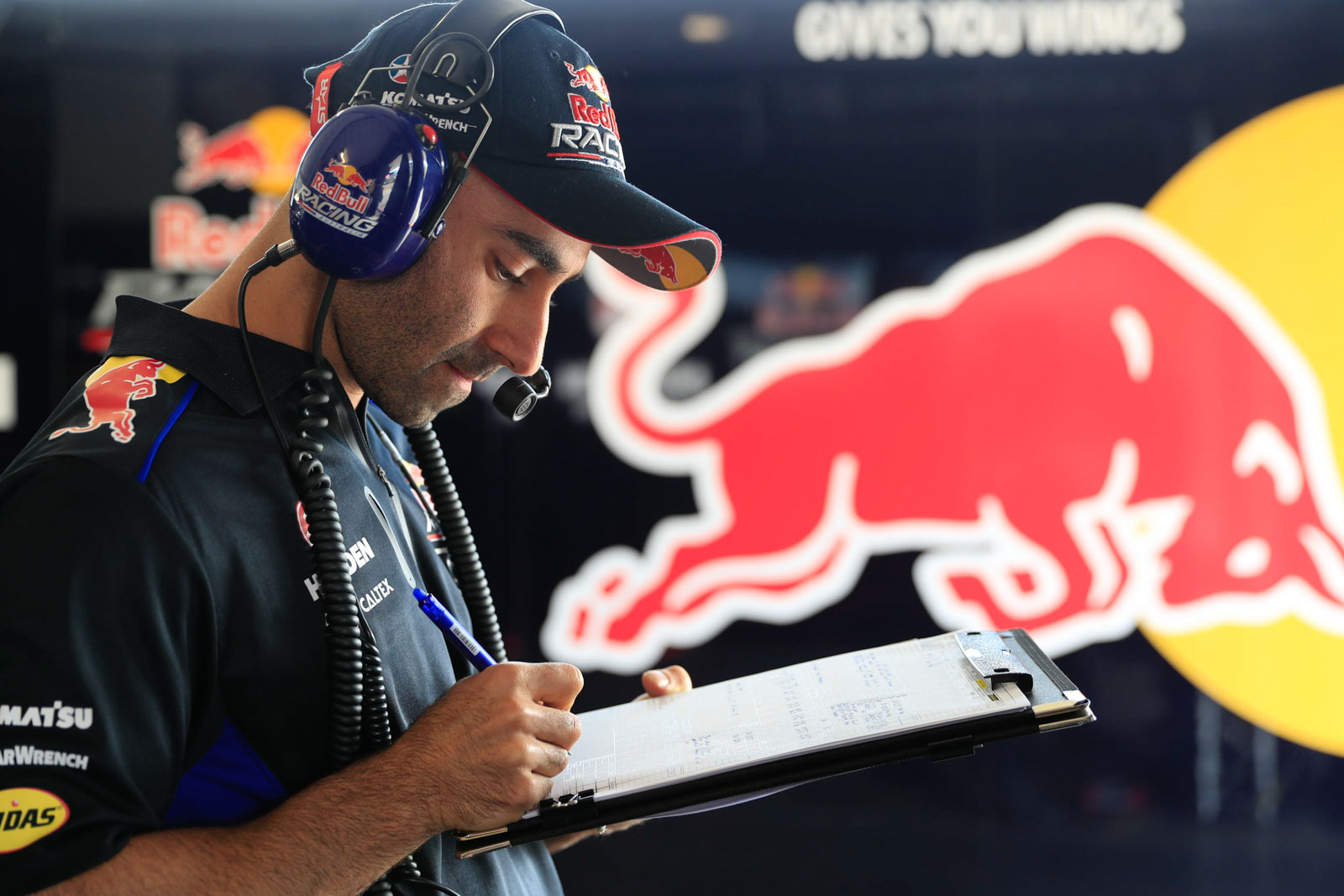 The enduros throw up more challenges than any other race in the season – that’s part of the reason Red Bull engineer David Cauchi counts the team’s 2014 Sandown win as one of his best.

“2014 was a big achievement – we are one of only two cars to win the Sandown 500 from starting on pole,” he told supercars.com.

“You would think starting from pole is a good thing but history tells you otherwise – we were very pleased to prove history wrong.”

Working as a team is key to tackling the races, given all the variables that need to be considered.

“There are a lot of elements that go into winning an endurance race. You have to do a lot of forward thinking and you are making a lot more decisions over the duration of the race compared to shorter races.

“You can make a call on lap 20 that changes what you can or can’t do on lap 80. So it is important to use the support crew around you to help make the right decisions.

“I enjoy endurance races as it is a real test of every member of your team and how well you all work together.”

With a switch to racing on soft tyres this year and reduction of compulsory stops from four to three, there are new challenges for the team and driver and co-driver this time around. Cauchi explains. 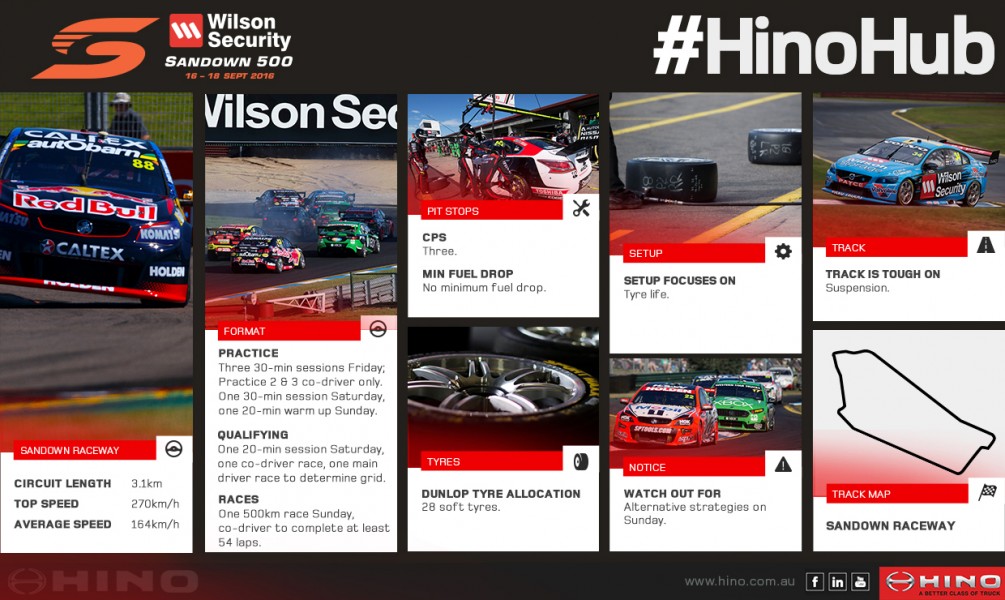 Download a full resolution copy of the #HinoHub here.

The 2014 Championship winning engineer described Sandown Raceway as “a bit like a street circuit without the walls”.

“It has big kerbs at turns two and can be bumpy on the exit of corners … the suspension takes a beating around Sandown,” Cauchi said.

“The two straights are long, so straight line speed is also a factor.”

The most common issue for the cars at Sandown is vibrations, given the long straights and high speeds.

Cauchi says the best passing opportunity is into the first corner if you can get a run out of the last corner. “You see some brave moves at turns four and nine, but they can end badly.”

Tyre life will be a key consideration given the amount of laps teams will have to complete on each set of soft Dunlop tyres. Fortunately for Red Bull, the cars have shown strong tyre life on the softer compound at recent events.

“With this year being the first 500 race on the soft Dunlop tyre I think the main focus [for car setup] will be making them last for long stint.”

Cauchi was mindful of giving too much away when talking about using the seven sets of soft tyres allocated for the weekend’s racing.

“With seven sets of tyres available it gives us some interesting strategy options come Sunday,” he said.

“The last time we were on soft tyre at Sandown was in 2011 and that was with the older generation car and 17-inch tyres. We have not raced at Sandown on the soft tyre since the NextGen car was introduced in 2013, so tyre degradation on the soft is a big unknown at the moment.

“Once we do some laps in practice and we will learn a lot from Saturday’s 20-lap qualifying races.”

One of the key questions is how racing on the soft tyre will affect the pit stop cycles during the race.

“Previously on the hard tyre you could easily go a tank of fuel on one set tyres. At the moment we don’t know how much the soft tyre will degrade over a full tank of fuel.

“The soft tyre will have a significant effect on strategy and we will see a lot more different strategies playing out then you would on the hard. It’s going to be fun Sunday afternoon.”

The primary driver only has one 30-minute run on Friday to test the car before handing over to the co-driver for the following two sessions.

“The main focus is getting PD happy in the car on a race setup,” Cauchi said. “In practice four on Saturday we will focus on qualifying speed with JW … watch out for cars doing longer runs and who can maintain their lap time (or have the least drop off) from the start to the end of a run.”

Rolling out of the truck in a good position will be critical for the main driver to get a good read on the car.

“With main drivers only getting one 30-minute session on Friday it does make it more critical to roll out of the truck with a car that is close to our ideal setup window.

“If you are a long way out it can make for a difficult weekend but I am lucky to have an exceptional co-driver as well.”

“The qualifying races add a bit of spice to Saturday and qualifying the car comes down to both main and co-driver which is not the case at our other endurance races,” Cauchi said.

“It is always important to qualify up the front for any race so I think the 20-minute qualifying session is still very important as you want your co-driver to start up the front and not be mid pack where things are more likely to go wrong.”

While the races are only a short distance – 20 laps – they will try and learn what they can about degradation.

“We will definitely be looking to learn about how the soft tyre performs over a longer distance in the first co-driver race and make some setup decisions for the main driver race.”

Co-drivers will need to complete at least one-third of the race – 54 laps.

Traditionally co-drivers start the race. “I think this trend will continue at Sandown, even with the soft tyre. It makes for only one driver change and gives you the most flexibility with strategy later in the race.”

Cauchi believes teams will look to complete more than the compulsory three pit stops across the 161 laps. He says the change to the soft tyre creates more strategy options than reducing the CPS requirement.

“The soft tyre could see cars electing to do more than the minimum three stops. We have seen taking an extra stop work for Car 888 on Saturday at Perth and cars diving in at safety cars late in a race and making up positions.

“It is going to be very interesting to see all the different strategies play out late in the race.”

Double stacking could affect the outcome of the race, though Cauchi reiterated that teams only do it when there’s more gain than staying out on track.

“Unfortunately double stacking will be a significant factor and the penalty for stacking can be big with the longer fuel stops. There are a few things we can do to mitigate the risk but at certain times it is simply unavoidable and better than staying out.”

The critical lap – to stop and make it home – is expected to be around lap 120.

“We still need to learn what our consumption will be on the soft tyre. The golden question is even if you can make it home on fuel from lap 120, will the soft tyre make it? Better watch on Sunday.”