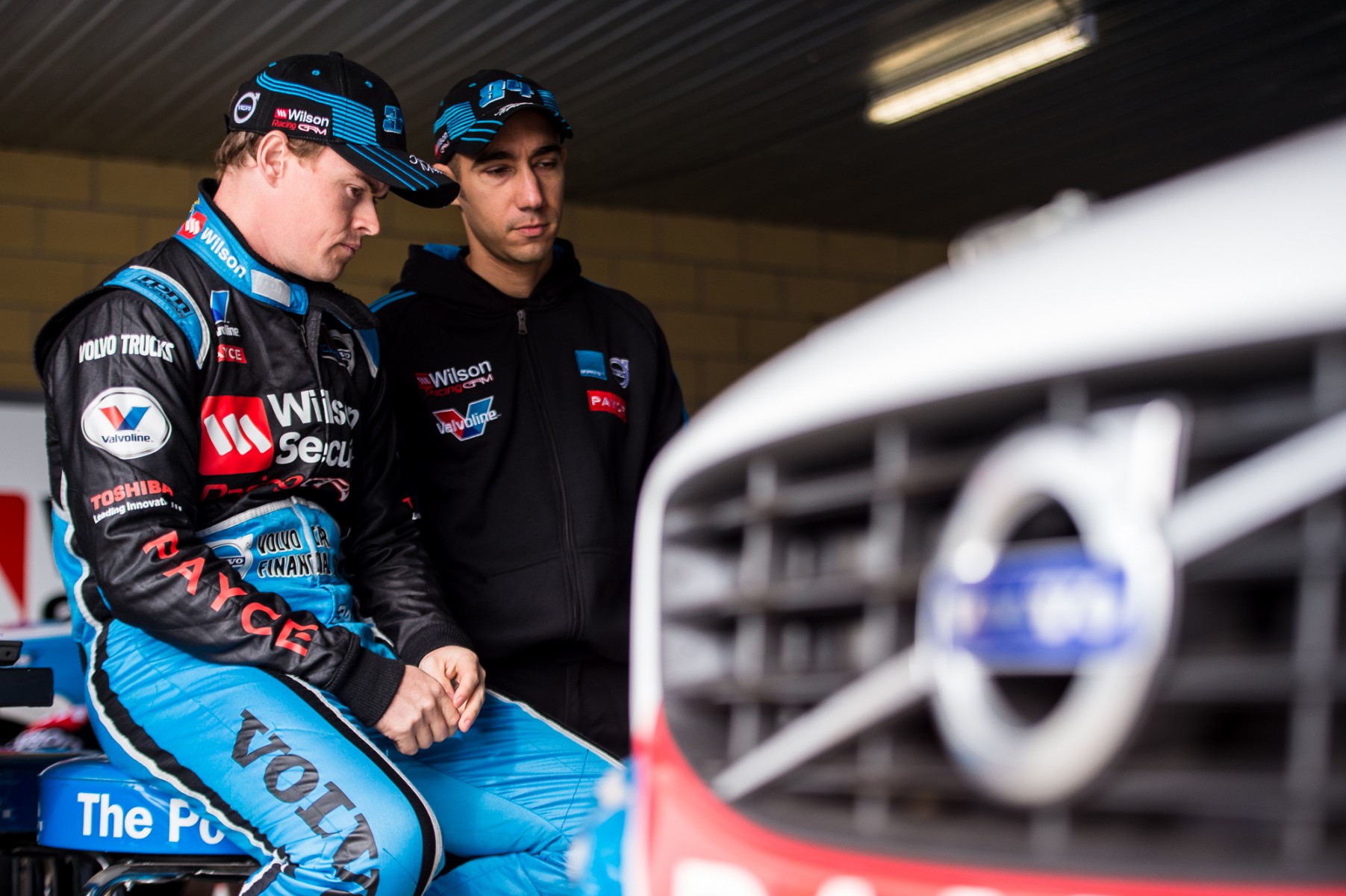 After joining Wilson Security GRM this season, it has taken James Moffat some time to acclimatise to the Volvo S60. Two top five qualifying results and a top 10 finish at Phillip Island was a good sign, and this weekend the team heads to the circuit Volvo recorded its first Championship race win in the new gen era back in 2014.

Engineer Manuel Sanchez, who has been with GRM since 2013, says the two are understanding one another well after just three Championship events.

“It’s always a bit tricky with a new driver – trying to understand his feedback, and the way he relays it back to me, but I feel we’re on top of that already,” Sanchez told v8supercars.com.

“He’s getting more comfortable in the car, getting used to the way we set it up and how it reacts to changes. We had a very productive test at Winton last week, so there’s definitely more to come.”

Sanchez is hopeful of a result this weekend – saying his expectations are “to come back with a couple of top five results, maybe even challenge for a podium, who knows?”

He explains the ins and outs of Barbagallo Raceway ahead of the Perth SuperSprint. 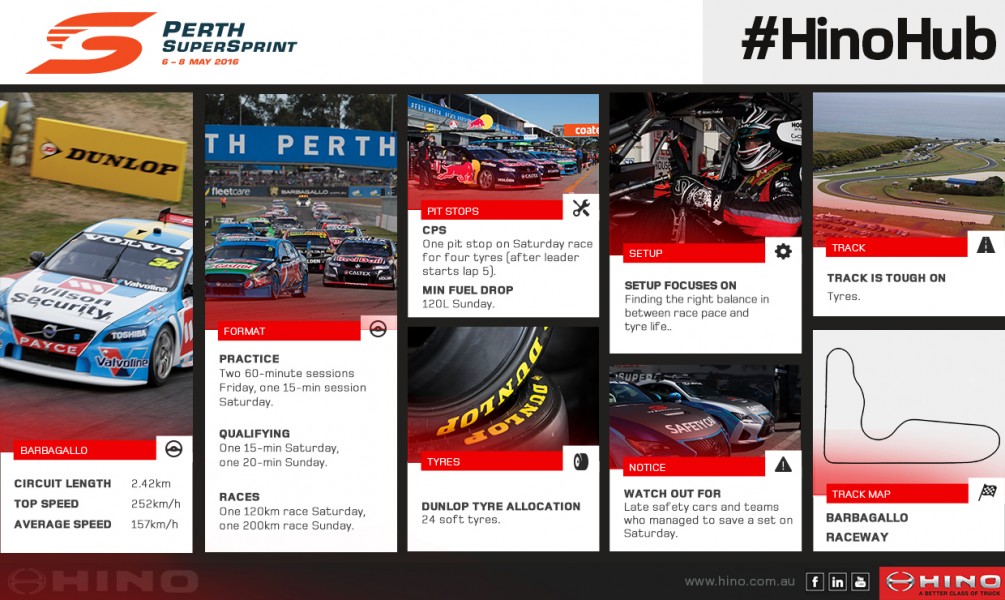 A lap around Barbagallo Raceway is less than one minute, and the track is defined by its abrasive nature that chews tyres.

Key passing opportunities are at turns one, six and seven.

Some aspects of the track are expected to suit the Volvo, though the team will focus on tyre life across the weekend.

“We’ve worked a lot on drivability, which should help maximise our rear tyre life in the races. We still have some work to do trying to generate more mid-corner front grip, without being to hard on the rear tyres…

“A balanced car should make it easier for our drivers to look after the tyres, while still being competitive and able to attack and defend when needed.”

The track is toughest on tyres and racing the Dunlop soft compound means teams must be careful of tyres hitting the cliff earlier than expected and losing track position.

“It’s one of the worst [for degradation] tracks we see all year, losing around 0.1sec a lap on the soft compound,” Sanchez said.

Teams have six sets of soft tyres, with one of them to be returned to Dunlop before the Saturday practice session.

“We are allowed three pre-marked sets for the three practice sessions. Some teams will use their ‘hand back’ set in the second practice session to get a good read on the car on fresh rubber on Friday.”

Some teams may do runs to assess degradation instead of tuning for qualifying balance during Friday practice, Sanchez says. In that case, Friday results won’t provide an accurate form guide for qualifying, so Saturday’s 15-minute session could produce a surprise result.

Qualifying is critical at the circuit, as battling with other V8 Supercars can eat up the tyres as a track that requires a level of conservation.

“Let’s say you have top five pace but for some reason you’re at the back of the field – it’s very difficult to look after the tyres if you’re overtaking cars lap in and lap out,” Sanchez said.

“The soft compound degrades even quicker if you find yourself off the racing line out on the marbles, which is going to happen if you have to fight your way to the front.”

Unlike other 120km sprints this year, cars are expected to run longer before making the compulsory tyre change.

“Based on the high degradation nature of the track I doubt we’ll see many cars pitting when the window opens.

“I’d say most of the field will try to split the race in half and pit just shy of lap 25.”

“[It makes] it possible go for the under-cut and pit earlier than expected to make some ground in clean air without actually having to overtake other cars on track, putting extra stress on the tyres.”

Managing tyre life in conjunction with the required 120L fuel drop on Sunday will add to the strategy.

“With cars needing around 175L to complete the full race under green conditions, most of the field will start with approximately 55L of fuel, and have enough room to fit at least 14sec on the first lap, but then again the key factor for strategy is tyre life, not fuel usage,” Sanchez said.

“Fuel-wise you could probably stretch a tank for 53 laps, meaning you could pit on lap 30 and make it home; however I don’t think we’ll see any team putting that many laps on one set of tyres.

“A more realistic number would be around lap 50, which leaves a 33 lap stint home, which is certainly achievable on a set of tyres.”

As usual, the appearance of the Safety Car could throw a spanner in the works for teams.

“I believe most teams will try to make it to lap 25 before completing the CPS – if a Safety Car is deployed way earlier than that, let’s say before lap 13, it’s going to be interesting to see how many cars take it and try to go the distance on one set,” Sanchez said.

Double stacking needs to be managed – but, again, teams can’t send one V8 Supercar out too early on its tyres.

“Usually to avoid double stacking teams opt for pitting their second car on track quite early in the race, however because of the high degradation I think is unlikely to see any car pitting too early, increasing the risk of double staking.”

The Perth SuperSprint kicks off tomorrow with two practice session. Click here for TV times for the weekend’s event at Barbagallo Raceway.