A furious David Reynolds has lashed out at Shane van Gisbergen after he sent him off-track and finished last in the first race at the WD-40 Phillip Island SuperSprint.

Reynolds dropped to third in the Championship, as he fights fellow Ford driver Mark Winterbottom and eventual race winner Craig Lowndes for the 2015 title.

The Bottle-O racer fronted van Gisbergen in the TEKNO transporter, and while the Kiwi referred to a tap at turn one, Reynolds told him he was "dead to me".

"He was drilling me a few corners before, drilled me at Siberia andmust've got the tiniest little overlap - I don't know I was just turned around at high speed," Reynolds said on the telecast.

"It's not very good but the good drivers in the field, they can pass you without hitting you - obviously I must've got a bad one beside me."

Asked if he expected an apology from van Gisbergen responded: "He's dead to me bro, dead to me." 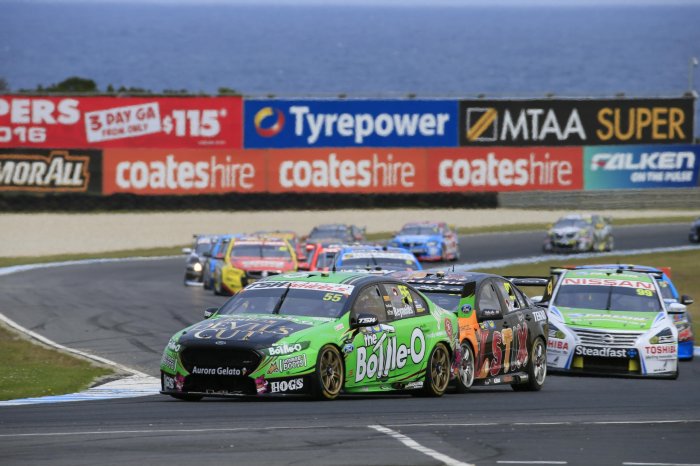 Van Gisbergen confirmed that for him, it all started at turn one.

"It did, he just run me off the track. Separate incident," van Gisbergen, who is fifth in the Championship, told v8supercars.com.au.

"But yeah, I gave him a little bump at six, probably a little too much, but then I was clearly beside him and he just kept running me across the road.

"I was happy with that but then he run too far so I wasn't going to back out of it.

"Championship-wise I know he is in a fight. I am not in it, but that's not the point, I am still worrying about my championship.

"I was pushing as far as I could. Sorry to end his race like that, but I wasn't going to back out."

The incident is to be investigated by Driving Standards Observer Jason Bargwanna, though van Gisbergen was not worried about receiving a penalty.

"I will go and talk to Bargs about it, he'll come and speak to us. It's the way it happened, I am sorry that he ended up spun out but we'll try and fight that one."

He suggested it was Reynolds who may receive a penalty and felt he was not deserving of one.

"I don't think so no, but maybe him at turn one. I was beside him and I seen him see me, and he just drove me straight off the road so that was pretty average.

"But anyway, we will have a go in race two from a bit further back."

Reynolds' gap to Winterbottom is now 272 points as they line up for the day's second race.

Reynolds will start from fifth and van Gisbergen 11th in the day's second 60km race at the WD-40 Phillip Island SuperSprint.