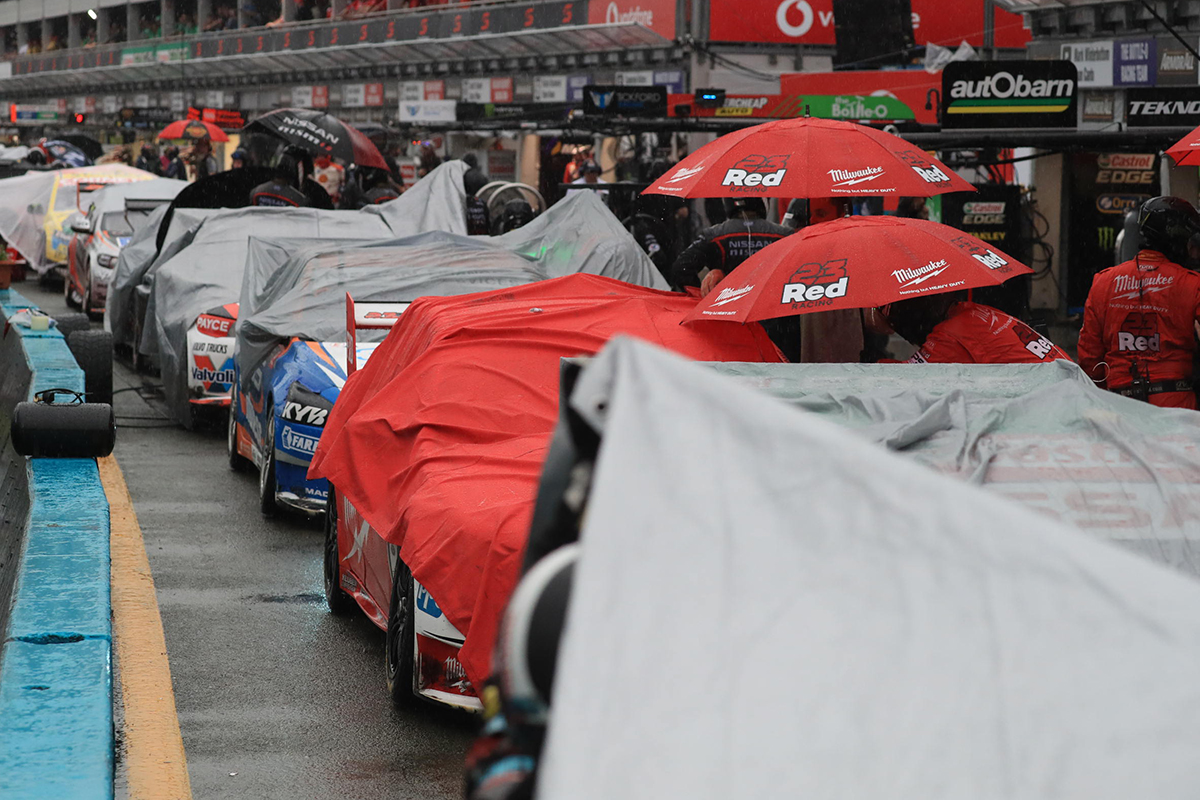 The second leg of the Vodafone Gold Coast 600 has been suspended due to wild weather, after a storm lashed the circuit.

It could still resume, but concerns exist over standing water and rivers running across the track circuit, which are being inspected by officials.

The race would have to get to 50 percent of the scheduled distance, lap 51, in order for points to be awarded, and has a time certain finish of 4:48pm AEST (5:48pm AEDT) plus one lap.

UPDATE: The field is set to head back out behind the Safety Car at 3:59pm AEST to assess the conditions.

Cars had already spent nearly 10 laps behind the Safety Car, initially called for the incident that ended the race of Jamie Whincup and Paul Dumbrell.

Dumbrell crashed at Turn 12 as heavy rain started to fall, which has turned into standing water at some corners.

Anton De Pasquale leads the way, ahead of Garry Jacobson, Alex Davison, Aaren Russell, Richard Muscat and Dean Fiore - that group of six having made a single pitstop.

Behind them, the bulk of the field pitted for a second time, on lap 34 to swap co-drivers for full-timers.

Storm clouds engulfed the Gold Coast between the Top 10 Shootout and the race, but the afternoon's main event got underway in overcast conditions.

Polesitter Luke Youlden kept the lead off the line for Erebus, bolting to be 1.1s clear by the end of lap one, before that gap was chipped back by Moffat.

As van Gisbergen's partner Earl Bamber closed on the pair of them, after cruising past Triple Eight stablemate Steven Richards for third, Moffat made a successful move for the lead on Youlden at Turn 4 on lap 13.

Moffat built a lead as the first spots of light rain were spotted a handful of laps later, Bamber then passing Youlden on lap 23.

Serious precipitation started to arrive perilously close to the lap 34 cut-off for co-drivers - the bulk of which started - to have completed their minimum number of laps.

Some teams further down the order had pitted for the safety of wets before Moffat led a lead group also including both Shell Fords into the lane, while Bamber and Youlden completed an extra lap.

That coincided with the Safety Car being deployed, when Dumbrell found the wall and partially blocked the track.

The Commodore wedged in the tyre barrier caught out Macauley Jones, the Tickford Falcons of Dean Canto and David Russell and later Jones' team-mate Ash Walsh.

Both BJR Commodores sustained damage, those hits helping end the day of the #1 Commodore, which was wedged under the tyres in any event. 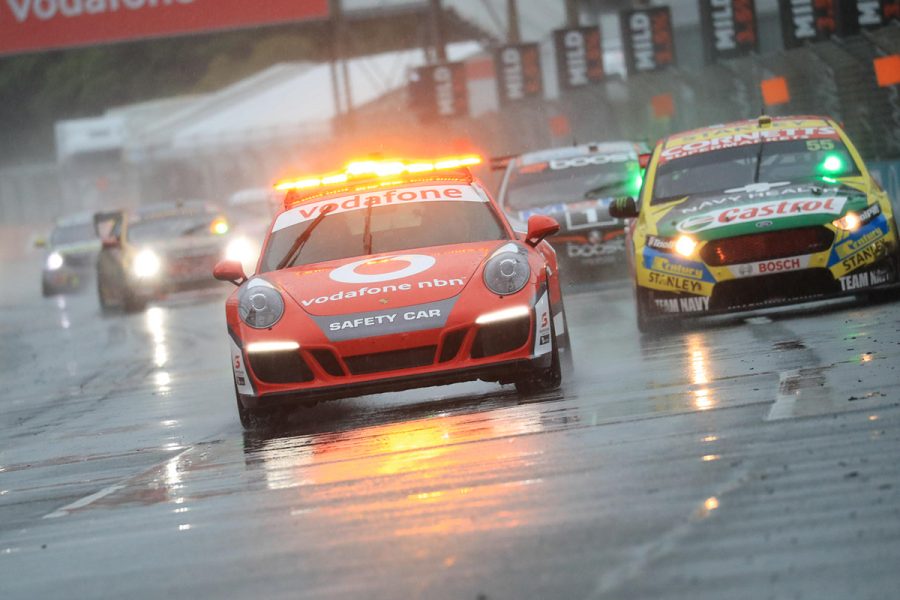 Moffat led Jack Perkins, Alex Premat, Youlden, Bamber, Richards and Warren Luff as the field circulated behind the Safety Car, which took the field to the time they could make driver changes.

In a pitstop shootout, Mobil 1 Boost Mobile Racing got Courtney out ahead of Mostert's Supercheap Ford, followed by McLaughlin, Reynolds, van Gisbergen and Lowndes.

The leaders of the PIRTEK Enduro Cup, Lowndes and Richards are under investigation for a Turn 4 clash between Richards and Luff on lap 28.

Premat and Tony D'Alberto made progress through from the base of the top 10, for McLaughlin and Fabian Coulthard, but the #12 Ford is currently 21st after double-stacking in pitlane.

The crews of De Pasquale, Jacobson, Davison, Russell, Muscat and Fiore opted not to stop again for driver changes; De Pasquale started the race along with Andre Heimgartner and James Golding, paired with Russell and Muscat respectively.

While the Dumbrell Commodore had been cleared, the storm lashing the circuit was not deemed safe to resume racing, with proceedings halted on lap 37.

The Tekno Commodore was an early retiree, team owner Jonathon Webb tagging the wall and parking the car with left-front-corner damage on lap 19.

Related Content
As It Happened: Vodafone Gold Coast 600  ›
21/10/2018
Stay In The Know
Sign up to the Repco Supercars Championship Newsletter