Garth Tander believes Holden Racing Team bosses made a 'mountain out of a molehill' over the contact between he James Courtney on the Gold Coast on Saturday.

The teammates have been racing door-to-door this season - with Tander coming off second best and being critical of Courtney earlier in the year- but both former champions felt there was nothing wrong with the exchange when fighting in the top five during the first leg of the Castrol Gold Coast 600.

"There was nothing in it - and James and I both went into the debrief with Adrian [Burgess] and Ryan [Walkinshaw] and they told us off," Tander told v8supercars.com.au.

"James and I walked off and looked at each other saying, seems to be a mountain out of a molehill here.

"Look, I think it's just hard racing - James and I are both hard racers.

Courtney said the teammates had a good laugh about it and implied the bosses had been emotional, despite the telecast reporting the #22 driver was 'screaming he'd take Tander out' over the radio.

The contact was in part triggered by lapped Andre Heimgartner after the Safety Car restart, with Tander sliding up to fourth, ahead of Courtney, after the battle. The position clinched he and Luff the lead for the Pirtek Enduro Cup.

Burgess said on the telecast: "It's not good enough, we want to do a better job and running into each other isn't helping either ... when they come back they're going to get their heads banged together."

Plenty was at stake for the HRT over the weekend at the Gold Coast, with Courtney returning from serious injuries and Tander (and Warren Luff) racing to win the Pirtek Enduro Cup.

The team hasn't achieved the race results it was hoping for this season, with just one win with Courtney behind the wheel at the season opening Clipsal 500.

Both were ticked off the list over the weekend, with Courtney and Jack Perkins earning Sunday's win after a great strategy play, and Tander-Luff taking HRT's first Pirtek Enduro Cup after Holden rivals Red Bull won the past two. 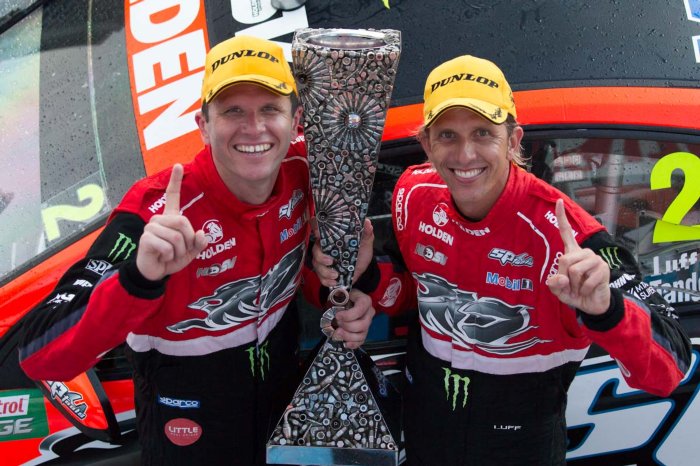 "It's a team sport we're in, but the team aspect is much, much bigger in these races," Tander said.

"There's two drivers, a lot of strategy involved, a lot of pit stops over the journey of all those races and a lot of decisions have to be made both in the pit bunker, during the pit stops, and then both the drivers when we're driving - so it's a team award and that's important for our guys."

The pair managed to get across the line with two third place finishes and two fourths, including a podium at the Supercheap Auto Bathurst 1000 after starting from 22nd on the grid.

While Luff has not been formally signed as an HRT co-driver for 2016, both he and Tander said it would be discussed this week.

"Why would you turf the guy out who's just won the enduro cup? There's only one guy who's won two of them and Waz is it," Tander said.

"When Nick [Percat] moved on, we had to find a replacement for my car and Waz was perfect.

"He has been fanatic so no reason why he won't be back in car two again next year."

Garth Tander  ›
15' Holden Racing Team ›
Stay In The Know
Sign up to the Virgin Australia Supercars Championship Newsletter
We use cookies to ensure that we give you the best experience on our website. If you continue to use this site we will assume that you are happy with it.Ok