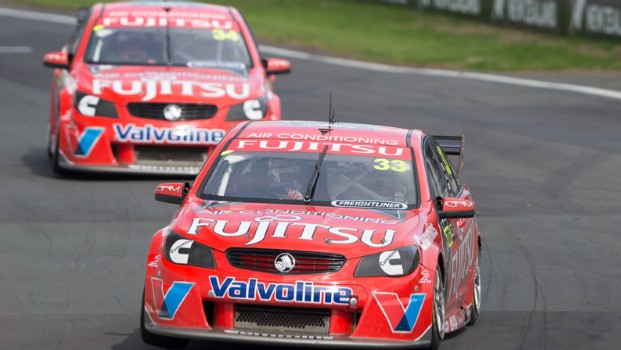 The win in Race Six made yesterday an amazingday for Fujitsu Racing GRM with Scott McLaughlin’s maiden V8 Supercar victoryin front of his home crowd. But it could have been one better – early onit looked like the team could have brought home a 1-2.

Both Fujitsu cars have been on the pace thisseason. In both events there has been a top 10 shootout, both drivers havefeatured and McLaughlin’s pace at the non-championship grand prix showed thecars had the speed to run at the front of the field.

Yesterday the pair both qualified well for thefirst race, Race Six of the Championship, and by lap 12 McLaughlin was runningfirst and teammate Alex Premat second.

There had earlier been a ruling Premat had afalse start and was awarded a 10 second penalty, but even worse, the Frenchmanwent straight ahead at Turn Five, and by lap 22 his Holden Commodore was in thegarage and way out of contention.

“I had my throttle stuck on the floor so Icouldn’t finish the race, it was an issue with the car,” Premat said.

“The car was amazing – it would have beengood to have had two cars on the podium – but we’ll try and do that tomorrow.”

Premat had heard on the radio he had been handeddown the penalty, but said he didn’t think he jumped the start when he saw thefootage. He did not feel anything unusual happen in the car on the grid.

“I heard it on the radio but when we saw thefootage I didn’t jump the start. Even with that distance anyway, the differencewould have only been p2 or p10, I would’ve been in the race.”

Premat said he and McLaughlin had a good gap onthe drivers behind them – in fact, he felt he was quicker than his teammate.

“I didn’t have to defend because we were quitefar away from the group behind us in the race,” Premat said.

“I saw I was a bit quicker than Scotty – maybenot a lot, maybe a tenth. Without the issue, the car felt really good.”

Premat didn’t qualify as well for the second of theday’s races, starting in 14th for Race Seven, but after the team fixed the Commodore, he managed to finisheighth.

“It has been anamazing day with the first victory for Scotty in the category, first for himand great for the team. We have seen that our cars have been strong at all therace tracks this year.

“It could have been abetter day for me… But in Race Seven we had a good start and finished eighth,it was good to finish in the top 10 again, especially after the issue we had.”

Alexandre Prémat  ›
2013 ITM 400 Auckland  ›
Stay In The Know
Sign up to the Virgin Australia Supercars Championship Newsletter
We use cookies to ensure that we give you the best experience on our website. If you continue to use this site we will assume that you are happy with it.Ok