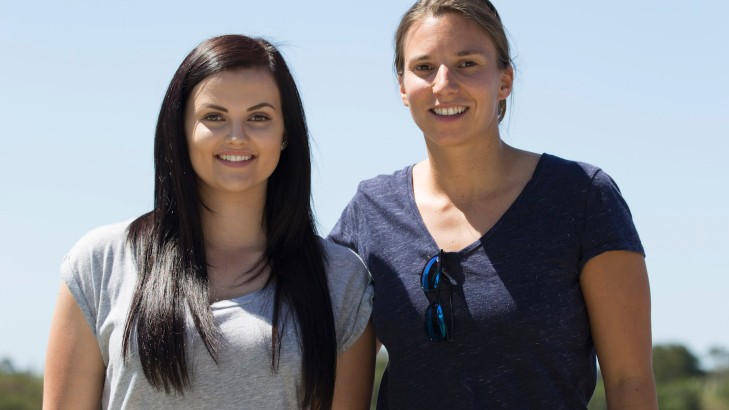 A gearbox issue sidelined Renee Gracie at Queensland Raceway today, but after a quick change this morning both she and Simona de Silvestro were on-track cutting laps in the Fujitsu Dunlop Series Falcon.

A range of Dunlop Series teams used today to test prior to the Supercheap Auto Bathurst 1000, which holds the category's longest race of the year - a 250kmmini-enduro with pit stops and the option to enter a co-driver.

Gracie shared her Fujitsu Falcon with Swiss driver Simona de Silvestro, who she'll race with in the V8 Supercars Championship 1000km race, albeit in a different Ford Falcon to what she drove the test day today.

The pair - known as the Harvey Norman Supergirls - will test the FG X they'll steer in the 1000km race next week at Winton.

While de Silvestro had the chance to complete some laps today, to help her adjust to the unique V8 Supercars, the focus was on preparation for Gracie's Dunlop Series race. The pair completed 70 laps all up with de Silvestro running less that half of them.

"We had a few problems with the gearbox at the start of the day so we swapped that around nice and early and the rest of the day we ran nice and smooth," Gracie told v8supercars.com.au.

The key was practicing pit stops - which Gracie hasn't done in the Dunlop Series car - ahead of two races where she will need to complete them.

"Things like doing big fuel runs and stuff like that we made the most gain out of," she explained.

"Not necessarily [working on] setups as such, but getting acclimatised to having a full fuel tank doing pit stops, stopping and going quickly, not stalling - stuff like that."

Neither Gracie or de Silvestro have raced a V8 Supercar at Mount Panorama before, and Gracie has one goal for both long distance races - stay in the game.

"I've never driven the car there before, I've obviously got the experience of the year so far but I'm really just hoping to survive," she said.

"It's really important to gain as much experience as you can and it's a very long race, so obviously you don't want to be out on the first lap, you want to be there on the last lap.

"I probably won't know until after practice, to see how I'm going [but] it's a good opportunity for us endurance drivers to get as close to the race [distance] that the V8 Supercars do."

And after hopping into the Dunlop Series Falcon for limited laps, Gracie was impressed with her teammate's ability to adapt.

"She adapted really well - it's one of those things, she probably couldn't be driving a more opposite car to what she's used to," Gracie said, adding that Morris was also pleased with her progress.

"It's going really well so far and [there are] a lot of similarities in both of us, a lot of her in me and it's really good so far. We'll have a lot more time to spend with each other as well."

Matt Stone Racing was also out at Queensland Raceway with Todd Hazelwood and Shae Davies behind the wheel of their FG Falcons.

Meanwhile in Winton, Brad Jones Racing's three cars ran fairly smoothly, with Tony D'Alberto sharing with Josh Kean ahead of his co-driver run at Bathurst. That car had gearbox sensor problem, which took some time to replace - but otherwise no other issues for Andrew or Macauley Jones as they focus on a track BJR always looks forward to racing on.

Eggleston Motorsport tested three cars - but was without defending champion Paul Dumbrell. Instead, new entrant Liam McAdam took to the Holden VE for the first time, and the team was pleased with his progress throughout the day.

RSport and Matt Chahda also hit the track ahead of the Supercheap Auto Bathurst 1000.

Renee Gracie  ›
Stay In The Know
Sign up to the Virgin Australia Supercars Championship Newsletter
We use cookies to ensure that we give you the best experience on our website. If you continue to use this site we will assume that you are happy with it.Ok