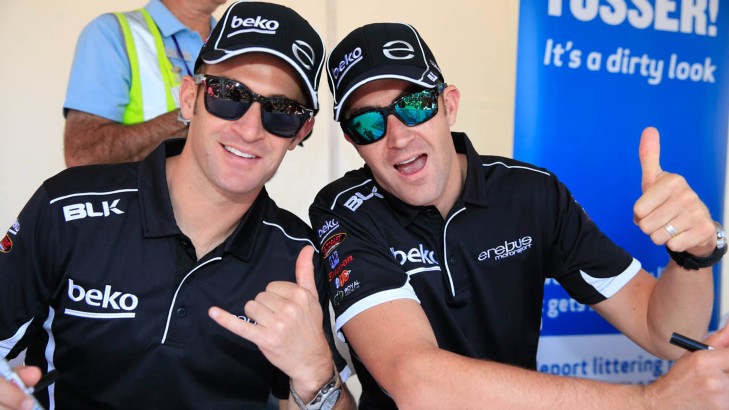 It's being missed by most people because he's not often in the front-running pack, but Alex Davison says his younger brother Will is now in the best form of his career and the match for any other driver in the V8 Supercars field.

Alex, who is co-driving Will's Erebus Mercedes-Benz E63 AMG in the Pirtek Enduro Cup, concedes his view will be dismissed as biased, but insists he has never seen his brother drive better.

"I am partnering with the best guy in the field," Alex told v8supercars.com.au. "Yes everyone will think I am biased, but I have no doubt about that. He is very well rounded driver and one of the most experienced guys out there now. He is very strong in pretty much every area now.

"It's good, I get to learn from driving with him, apart from him being my brother."

Will Davison is in his second year at Erebus and while the former championship runner-up scored a meritorious win in Western Australia, the 33-year old has battled to get the privateer Benz consistently into the top 10 this year.

But Alex, 35, who joins Will for the enduros for the second year in a row, has been particularly impressed by what he has seen so far in 2015.

"I watch his races closely because I am supporting him and supporting the Erebus team and every time I am watching these races my focus is on car nine and everyone else's focus is on their thing.

"So I don't know if anyone notices, but sometimes he might be mid-pack and he's racing really well and in most cases optimising whatever car speed and whatever grid position he has got on that day.

"The car barely comes back with a scratch on it and he's always moving forward. So he is racing really well."

Last year the Davisons' highlight was fourth in the dramatic Supercheap Auto Bathurst 1000, barely missing the podium in a car that struggled with engine issues all day.

This year, with an improved car, they are aiming to make it on to the podium together.

In the Wilson Security Sandown 500 they showed great promise, with Alex launching from eighth on the grid in the #StopTheViolence Benz. He raced confidently in the front pack in a competitive car until handing over to Will, who stayed in the hunt.

They looked a real chance of a top six finish until a starter motor failure at a pit stop lost them laps and they ended up classified 23rd.

Alex also revealed his hope that strong results would also help remind the V8 Supercars pitlane that he remains a competitive driver and one worthy of consideration for a full-time drive.

He has had three previous full-time stints, firstly an acrimonious short relationship with Larry Perkins in 2004-5, then three years with Stone Brothers Racing and most recently, a single season with Charlie Schwerkolt in a PRA-prepared Ford Falcon FG in 2013.

"I am out of the loop and it's very difficult to get back in," Alex conceded. "I don't think I deserve to be in that position. There are guys out there racing who I always have and always will drive rings around and I am confident enough in my abilities to say that.

"But the situation is what it is.

"Maybe I need to find a sponsor and bring a bag of cash. That's the easiest way for me to get back in because there is a handful of guys doing that who would not be on the grid otherwise and that's nothing new in motor racing. If that was a possibility I'd unashamedly go and buy a drive, but I don't have that stack of cash.

"So I will drive as well as I can and hopefully I can perform well enough in the enduros that I can stand out a little bit. It might help me get one of the few seats that are available for next year."