Kerb cutting and hopping on the front and back straight chicanes have made their annual appearance as an issue at the Castrol Gold Cost 600.

Drivers vented their frustration after the final practice session of the day, in which numerous times were eliminated for infractions at the two chicanes, where drivers recorded kerb strikes and hops.

Short-cutting the chicanes, which are the keys to a fast lap, has been a perennial issue at the street circuit and is policed by a combination of sensors and ‘stepped’ tyre bundles.

The two primary points where drivers fell foul of the sensors were at turn one on the front straight and the first part of the back straight chicane complex.

“I was a bit soft through the back chicane because I’ve been triggering it left and I triggered it right,” explained TeamVortex’s Craig Lowndes, who set only 18th fastest time.

“I moved the car over, triggered it left again and you don’t know where the line is in the sand, so it’s really hard.

“For me, my green tyre run was very cautious through the back chicane. There’s a lot more in the car.

“Our car was great through there, but I keep tripping the bloody kerbs.”

“We’re actually pretty happy with the car on old tyres, then when we put the good ones on, I think I hopped every lap down into turn one, so that was incredibly frustrating.

“The car speed is definitely easily in the 10s and I think we’ll be right tomorrow, it’s just frustrating with the whole kerb hop thing.” 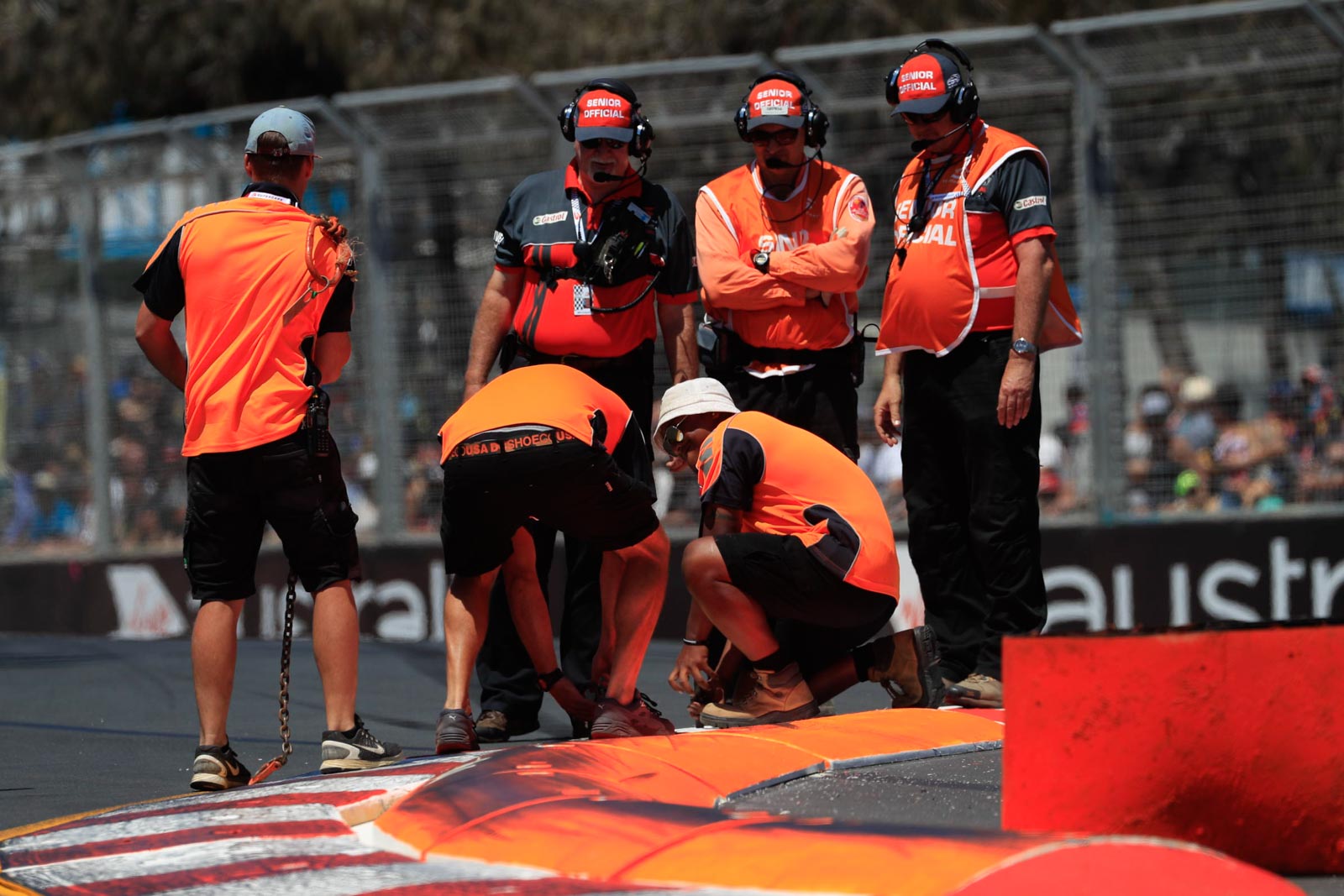 Virgin Australia Supercars Championship leader Shane van Gisbergen, who also set the fastest time of the day, described the situation at the resurfaced back straight chicane as “a bit crazy”.

“For that last session they pulled them [the tyre bundles] back off the kerbs, it opens it up so we were so much faster through there which is not a nice feeling, it’s pretty dangerous but you’ve got to do it – everyone else goes faster so you’ve got to step it up as well, but it’s just hard.

“I guess when you’re on an angle the sensors fire different so on my first timed lap on that one I got a trigger, and so I slowed down, did my next lap, went even faster, mucked it up and … it’s very hard as a driver to know what the limit is and it’s not very clear.”

Van Gisbergen said he thinks the stepped tyre bundles at the chicane are the way forward, and they alone would probably be enough to prevent drivers trying to taking too much kerb.

“I think the sensitivity of it [sensors] changes – I think in the first session there was only two or three and then in the co-driver session it was stupid and those guys were hardly taking as much kerb as we were. So I think they play around with it somehow and it’s always different when we go out.”

Discussions about the policing of the chicanes are bound to be an issue at tonight’s Driver’s briefing, while redress rules were also expected to be debated.

“I’m sure it’ll be a contentious item to bring up but I’m sure all the drivers will be interested to hear what they say,” Lowndes said.