V8 Supercars front-runners Jason Bright and Craig Lowndes started the competition early in the Northern Territory - but this time they were out on the water, rather than the racetrack.

The two favourite Holden drivers had the opportunity to experience some of the amazing scenery and adventure 'NT' has to offer, starting with a spectacular floatplane landing on Sweets Lagoon, the famed waters where Sweetheart, the monster crocodile, was caught in the 1970s.

"The great thing about today is, I left Melbourne at nine o'clock last night and at seven o'clock this morning I'm out here on a beautiful billabong seeing crocodiles!" Bright enthused.

It wasn't long before the drivers' competitive sides emerged in a spot of fishing.

"Craig caught one already but hopefully I go one up on him this afternoon!" The Team BOC racer said.

But Lowndes has had the first laugh of the weekend, two from two on his Team BOC competitor.

"Brighty and I had our rematch and I think I got him again!" Lowndes said.

"I got a little fish, which was actually really good. The guys were able to get an eagle to fly down... and take the fish out of the water!" 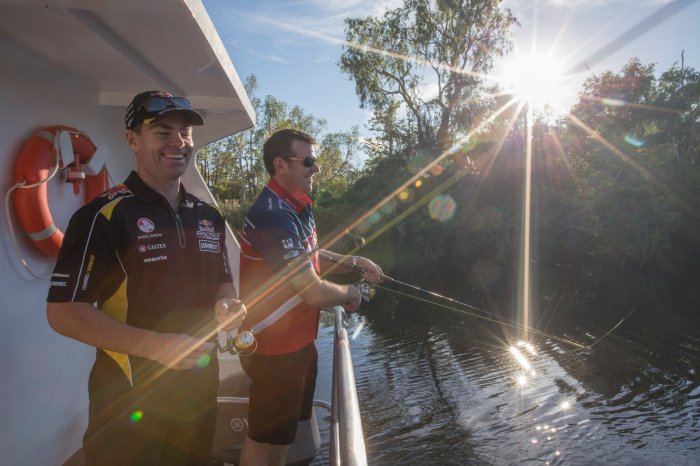 While there is plenty to see in the magnificent Northern Territory, 'The Ultimate Tour' meant Lowndes and Bright had the chance to take in the highlights of the destination in one action-packed day, without interrupting their race weekend preparation.

Joined by The Bottle-O Racing's David Reynolds and Erebus Motorsport's Lee Holdsworth, the boys made the best of having just one day to explore and experience the untainted nature of the NT - from an airboat ride through rainforest channels and wetlands, to a helicopter flight over Litchfield National Park, an off-road buggy transfer beneath the rainforest canopy, and even a swim in a 'croc-safe' pool.

"It's amazing how vast an area the Northern Territory is but with toys like this and so many adventures to go on, it's so easy to do the NT," Lowndes said.

"We just love being up in the warmth. Having the experiences we've had the last couple of years has been incredible through Tourism NT... It's been a day of new adventures." 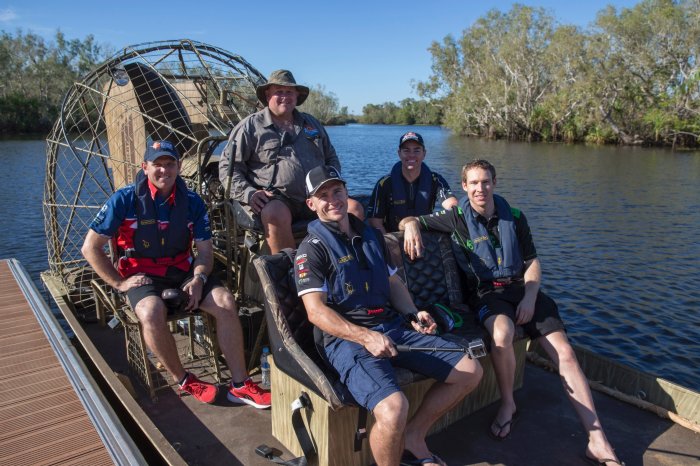 But the fun will transform to friendly fire quickly as the V8 Supercars hit the track tomorrow.

Lowndes sits second in the Championship points and is firmly focused on closing the points gap to Ford foe Mark Winterbottom.

"One-hundred and one points is always going to be tough to close down, but we've got to start somewhere," the Red Bull racer said.

"It is a great place, we love coming back here, it's been lucky for us in the past so we are looking forward to hitting the track and seeing what we can produce."

Bright, while not in the thick of the Championship fight, sits 10th in the tally and is hoping to steadily climb to the pointy end.

"Perth (last event) was pretty good for us - the low grip tracks seem to suit us pretty well. We just need to qualify well, that's been out weak point this year. If we can qualify well, we can usually have a good race... Hopefully we can get up the pointy end and we should be able to finish the weekend pretty well."

Bright identified Lowndes as a key threat to the title but believes his former teammate Winterbottom won't be overthrown easily.

"You can't write off Tripe Eight, but FPR and Frosty have had the best start to the year they've had (before), as well as Craig," he said.

"I think it's shaping up to be a very good Championship - so who knows?

"I certainly like the way Frosty has been going lately, it certainly bodes well for him."

Lowndes agrees. He knows Winterbottom - who has been in the contest for the title for the past few years, but has never quite gotten there - poses a real threat this time, after an even stronger start to the season than in 2013.

"We went in and out (of Perth) with, basically, the 101-point deficit - so we need to start winning races, getting some podiums and trying to close that gap now," Lowndes said.

"It's obviously very important before we head into the endurance season."

Will Lowndes come on top again this time around, after success on Sunday at last year's SKYCITY Triple Crown?

Will Bright fight back and rack up a second 2014 race win for the Team BOC Commodore?

Secure your tickets to the event now and ensure you see some of the natural wonder of the Northern Territory while you're there - you can do it all in a day if you desire. For more information, follow @AusOutbackNT on Twitter and Instagram and share your pics with #NTaustralia.

Jason Bright  ›
15' Team BOC and Freightliner Racing ›
15' Red Bull Racing Australia ›
2014 SKYCITY Triple Crown Darwin  ›
Stay In The Know
Sign up to the Virgin Australia Supercars Championship Newsletter
We use cookies to ensure that we give you the best experience on our website. If you continue to use this site we will assume that you are happy with it.Ok