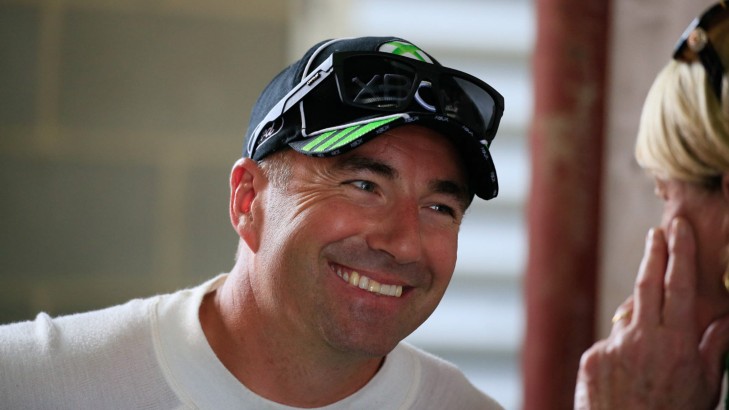 UPDATE: Marcos Ambrose is standing firm on making a decision on his future in V8 Supercars after the Castrol Gold Coast 600.

But now DJR Team Penske has announced its 2016 driver line-up in Fabian Coulthard and Scott Pye, the question is whether he will continue to co-drive or choose to retire.

Ambrose confirmed to New Ltd he was not interested in being a full-time driver in the category, and that it was his decision not to be listed as part of the '16 line-up.

"I do not intend to drive full-time any more. I elected not to be a part of it," Ambrose confirmed on Tuesday to News Limited.

"It's absolutely my choice. There is no sadness. I've had a great run, a great career.

"I have my own personal reasons. I've got other priorities now."

Ambrose spoke to v8supercars.com.au on Sunday night before the announcement and said he would not breathe a word about his future until he had fulfilled his duties as a co-driver.

"I'm not going to tell you a thing," Ambrose told v8supercars.com.au.

"We're going to get through Indy and then we'll look at the landscape then."

Penske Racing president Tim Cindric confirmed Ambrose's decision was still to come when speaking to media about the two-car expansion this afternoon. Ambrose was not part of the teleconference.

"As in the past, he's welcome to be part of our organisation in whatever role he wants to play - and I think that's yet to be determined," Cindric said.

"But certainly we didn't make this decision without having spoken to Marcos and understood where he is - and obviously that's for him to say - but he's supportive of this direction.

"A whole season isn't something he's interested in doing, so we took that into consideration and worked forward."

Returning to Mount Panorama for his first appearance in 10 years, Ambrose enjoyed his time in the XBOX Falcon, which he thought produced the best speed it had all year.

The DJR Team Penske FG X ran towards the front of the field for much of the day before a suspected steering arm fiercely pitched primary driver Scott Pye into the wall at the Grate on lap 138 of 161. The #17 had been running 11th.

"It's been a disappointing year, to be honest with you," Ambrose said.

"I thought I could contribute and it became pretty obvious from the landscape and the way the cars are now I can't catch up.

"It's not easy for me to re-learn the craft when there's no testing and no tyres so I did the right thing [stepping back].

"It was a difficult decision to make but it was the right decision for this team - we needed to see where we were and obviously we needed to do a lot of work."

2015 was Ambrose's sixth appearance at the Mountain - his first time driving there in the wet - and he felt comfortable behind the wheel.

"The groove definitely came back, it was pretty good, I enjoyed it," Ambrose said.

"It was probably easier to get going here than it has been at other tracks because the tracks bigger you've got more chance to get some rhythm."

Wet weather put a dampener on his run, and while he did have the chance to circulate in the wet at Homebush last year, that was in a different model Falcon.

"I really enjoyed my day, I had a good double stint in the dry that was awesome.

"Then in the rain it was all a bit too new for me, you know I've never really run these cars in the rain like that and I don't think I've run Bathurst in the rain either.

"So it was all new experience but survived it, and not the way we wanted to finish the day but I certainly enjoyed my stints."

He of course wished teammate Pye all the best. Pye was cleared of any broken bones yesterday and is focused on a recovery for the Gold Coast.

The XBOX Falcon qualified for the ARMOR ALL Top 10 Shootout and showed pace all weekend, but Bathurst turned out to be another chapter in a tough year for Ambrose and the team.