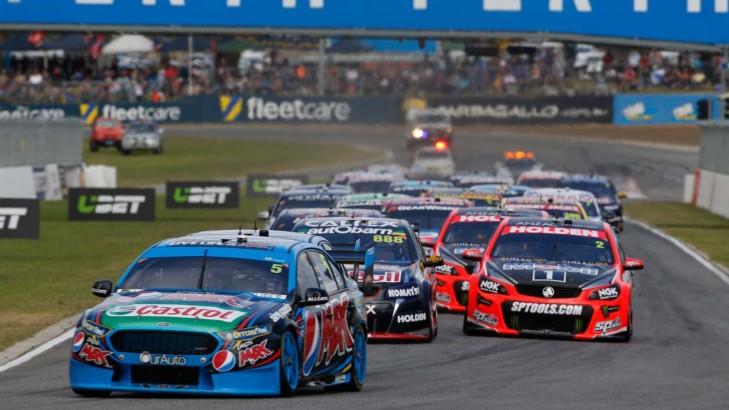 Mark Winterbottom's chances of winning his first V8 Supercars Championship in his final year as a Ford factory driver faces a key challenge at this weekend's NP300 Navara Winton SuperSprint, where he will race the new Falcon FG X for the first time.

Winterbottom says if the new car shows strong pace on the tight and twisting 3.0km Victorian circuit, that bodes extremely well for the rest of his Championship attack in the Prodrive Racing Australia-developed Ford.

"If we can get it to work there then we have a car that is going to be good everywhere. That is probably our big challenge coming up.

"We will find out, I am confident we can do it, but that's the test to get it right."

The racing version of the FG X Falcon has shown immediate promise and pace and seems to have overcome the rear downforce issues of the old FG.

It clearly has pace on fast circuits, but Winton is just the opposite of that and the understeer (or front-end laziness) the car has displayed could be an issue there.

In previous years, Winterbottom and the team would already have a good idea of how the FG X would cope with Winton's series of hairpins and 90 degree corners because it tests there.

But with only one test day for the entire season available, this is its first visit to the track in 2015.

"I'm looking forward to it; it is our home track so we feel pride in getting a good result because you always want to win at your home track," Winterbottom said. "Hopefully the car suits the circuit. Because we haven't been there yet this year, normally by this stage we would have turned up to Winton with two test days under our belt, so it feels different."

Winterbottom heads to Winton running third in the Championship after a strong showing in the UBET Perth SuperSprint. But he could have been even more successful if things had gone his way in the 200km race double-points race.

Winterbottom finished Saturday in Perth riding high in his Pepsi Max FG X with a pole, two wins and the Championship lead by one point over perennial rival Jamie Whincup in the Red Bull Holden Commodore VF.

Winterbottom fell back from the lead to a distant 15th place as his tyres faded, while teammate Chaz Mostert hung in for fourth place on the same strategy.

Winterbottom's poor finish in the Sunday race meant he dropped 74 points behind Lowndes. Crucially he also failed to take maximum advantage of a rare bad day for Whincup, who ran off early and finished 19th.

"It's good to get wins again and qualify well," said Winterbottom. "That is a big confidence boost. But finishing where you do in the last race is what you remember as well.

"The car is going to have tracks that it likes and I knew Perth was going to be one of them," he added. "Heading into it I knew I could challenge for wins there."

He has raced for PRA (or Ford Performance Racing as it was previously known) for 10 years and finished second once and third five times in the Championship, but never won it. At the end of this season Ford ends its association with the team and motor racing.

Winterbottom said he had a good idea which Championship events would suit the FG X over the next few months.

"Anything tight we still need a bit of work but we have some bits coming to try and fix that. Hopefully they are what we need."

PPG and Daikin team up with DJR Team Penske