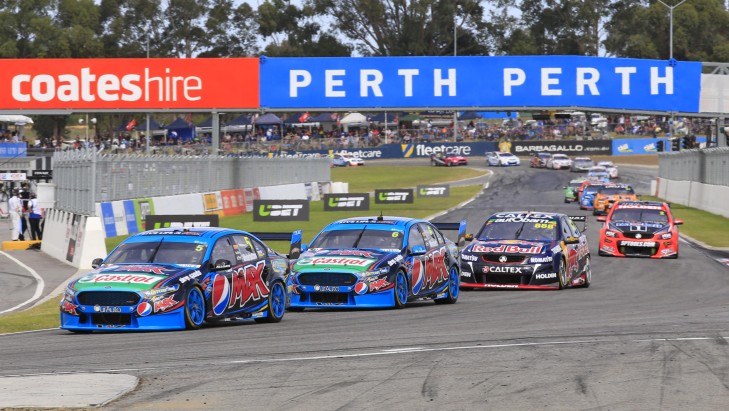 Mark Winterbottom has warned Prodrive Racing Australia must not again make the mistake of pitching him and team-mate Chaz Mostert into a head-to-head strategy duel after he finished a "disastrous" 15th last Sunday at the UBET Perth SuperSprint.

And the Ford star has also revealed his shock at how far he plummeted from the lead in the final stages of the 200km race on his fading soft tyres when Mostert managed to hang in there to finish fourth on similarly worn Dunlop rubber.

Winterbottom finished Saturday in Perth riding high in his Pepsi Max Ford Falcon FG X with a pole, two wins and the championship lead by one point over perennial rival Jamie Whincup in the Red Bull Holden Commodore VF.

Winterbottom's poor finish in the double points Sunday race meant he dropped to third in the championship 74 points behind Lowndes. Crucially he also failed to take maximum advantage of a rare bad day for Whincup, who ran off early and finished 19th.

"It's a disaster for sure because it's massive points," Winterbottom told v8supercars.com.au. "You don't get given easy rounds a lot of the time and Whincup doesn't have many bad rounds either. He has one, you just cannot finish 15th. So we didn't do a good enough job."

Winterbottom was reasonably philosophical about PRA's overall strategy backfiring: "You can't predict when the safety car is going to come out. In Tassie we started on hards, there was no safety car and that screwed us over."

What clearly concerned him most was he and Mostert were not better separated in terms of tyre runs and refuelling times.

He said while he and Mostert were behaving as team-mates on the track and not battling, the same was not happening back in the garage.

"The guys were trying to race each other and that's not what we have got to do," he said. "If I had finished second to Chaz winning I would have been more than happy with Sunday's race because you have to maximise your points and not try and race each other.

"That was probably our biggest thing you look back on last Sunday and say 'we did wrong'; both going soft tyres, both going longer than we had to in that first stint and putting fuel in the car against each other.

"Those are things we must make sure we don't get drawn into because if you focus on one person then everyone else will overtake you and that's what happened.

"Chaz and I have a good understanding but we just need to make sure we don't race each other on the same strategies and stuff."

Mostert pitted from second place on lap 16 to start his hard tyre stint while Winterbottom stopped on the 19th lap after leading from the green light.

"The first stint we could have done 10 laps or really shortened it up to make sure those tyres were fresh to go on for the last stint," Winterbottom explained. "We could have done one (car) as early as lap five and then one a bit longer, but we come in at very similar times. We could have split it a lot more."

Winterbottom said the team would examine the issue before Winton, but had already acknowledged it had made the wrong call on strategy.

"We will definitely look at it, but they know it was the wrong call. You don't go off about it, you back the team."

More puzzling for Winterbottom was his car's lack of performance at the end of the race compared to Mostert.

"I am not sure why my tyres blew out as bad as they did. I have some issue somewhere," he said. "Chaz was driving really hard and I was driving really conservative and his car held on to its tyres and mine blew up with about 20 to go.

"We should have still finished fourth or fifth and been okay. Traditionally I have been a lot better on tyre life than everyone ... Our tyres should have lasted longer, something has gone on that has caused a massive blow-out of times.

"There is something somewhere. My hard tyre pace was reasonable. My car wasn't 100 per cent, but that soft tyre just fell apart. But you never know for sure until you go back and review."

Mark Winterbottom  ›
15' Pepsi Max Crew ›
Stay In The Know
Sign up to the Virgin Australia Supercars Championship Newsletter
We use cookies to ensure that we give you the best experience on our website. If you continue to use this site we will assume that you are happy with it.Ok