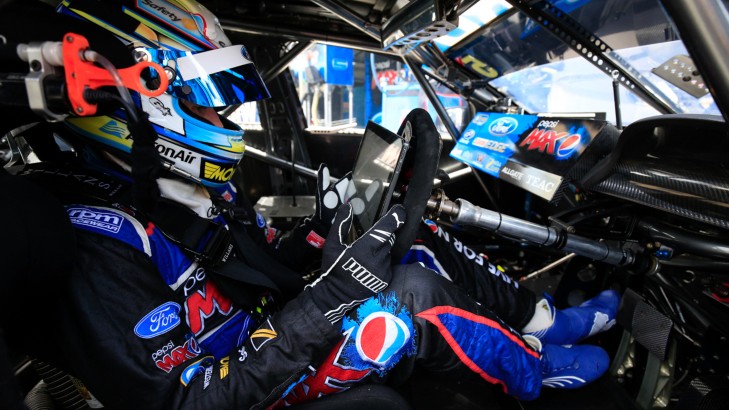 The Ford star - who sits second to Champion-in-waiting Jamie Whincup - feels one of the advantages Triple Eight has is a technical director who does not engineer a car on race weekends. He specifically referred to his rival team's French mastermind Ludo Lacroix, who began travelling to the track early this season to help dig Whincup out of his rough patch. The team believes Lacroix was a critical part of securing Whincup's sixth Championship.

"It is frustrating because I know our guys can do it - our guys work really hard," Winterbottom told v8supercars.com.au.

"All of our engineers do a great job, but we need that direction to go to the next level and that's holding us back."

Currently Winterbottom's race engineer Grant McPherson heads the engineering department, and while Frosty was complimentary of his Pepsi Max Crew, he felt the workload involved with running a car as well as the technical side was difficult for anyone to manage.

While the team has previously had respected engineers Mathew Nilsson (now at Walkinshaw Racing), Campbell Little and James Small - who all departed FPRat the end of last year - neither filled the role Winterbottom believes is necessary.

"Campbell was for a month - and then he ran my car. Whenever he ran my car it became so hard to really have eyes forward, because it's a full-time job," he said.

"'Techo' was really good at managing and working the team together ... but it wasn't that technical director that I think we need, something different."

Winterbottom praised the work the race engineers do, devoting long hours and spending late nights at the track pouring over data to try and get that extra speed out of the car.

"People don't see it, they just think 'why don't they engineer quicker'. But the engineer is in charge of looking over the data - they've got a massive process throughout the week sorting tyres, running a car, making sure the mechanics have their run sheet. In a week, that's got to be done, and they're then trying to develop bits to go on the car and trying to engineer the car.

"It's a tough job, they do a really good job ... and I feel sorry for them because it's not making sense - the car - at the moment."

Winterbottom is understandably devastated to fall short in the title fight, particularly given he had such a strong start to the season.

Why they could beat everyone else in the Championship and not Red Bull, was something Winterbottom could only wonder about.

"It's like they're doing something different, because compared to everyone else we do a good job, it's just that one team that seems to find something."

If he manages to hold on to second - which he holds over Craig Lowndes by a margin of 95 points - it will be Winterbottom's second time finishing runner-up to Whincup.