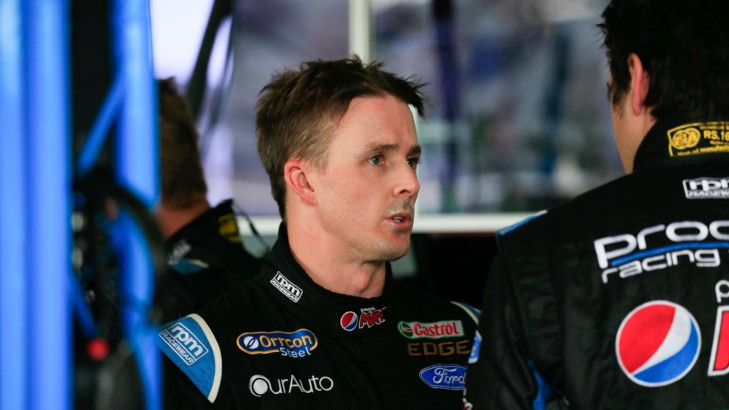 Mark Winterbottom wants more speed for the penultimate round at Phillip Island as he pushes for his first V8 Supercars Championship.

His Pepsi Max Ford Falcon FG X has been consistently strong throughout the season but another round winless at Pukekohe has him looking for more from the car.

While he is comfortable with his position in the Championship - leading Prodrive teammate David Reynolds by 239 and Red Bull's Craig Lowndes by 240 - Winterbottom says there are no guarantees and the best way to earn points is to win races.

"The less rounds there are to go, and the points lead you've got is good if you do the maths," Winterbottom told v8supercars.com.au.

"So it's good but we needed to be quick - we need to get our speed back a bit."

The Pepsi Max driver came into the weekend with a 258 point lead - so he has lost minimal ground across the ITM 500 Auckland finishing seventh, fourth and 11th.

But he has always said race pace means the Championship takes care of itself - and that's what he is looking for on the run home.

"On the Gold Coast I qualified third, but this round lost a little bit of speed," he said.

"In [yesterday's] race that car was really good then.

"But you're going to lose points, going to gain points - that's what happens in the championship, just everyone focuses on the last [bit] because it's getting to the end."

During yesterday's race he was spun in a multi-car accident that also involved James Courtney, Jason Bright and Cameron Waters. No penalty was handed down, though Frosty dropped to the back of the field before charging to 11th.

"I ended up 25th after three laps and finished 11th, so it was an enjoyable race actually.

"Take the Championship out of it and the race was enjoyable - to pass cars is cool.

"The car was good, we probably missed an opportunity there with qualifying and the car was good in the race so 11th was a good fight-back."

While the FG Xs are expected to be quick at the fast and flowing Phillip Island, Winterbottom wouldn't count his chickens before they hatch.

"In two weeks time, we roll out Friday, we put tyres on and we'll see if we're at the top or the bottom," he said philosophically.

"We can't predict anything in this sport - you can never predict if your car is good or bad.

"You roll up and come out and the time sheet tells the story so should be good, but you just don't know.

"Everyone's so close now - one tenth is ten spots effectively. So [going from a] good car, to average car can be a big difference in position.

"We'll find out when we roll out."

Winterbottom has earned two wins at Phillip Island, the last in 2013.