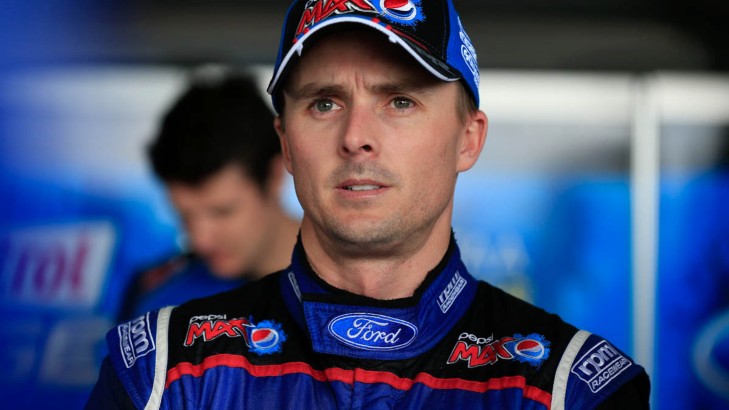 Qualifying had been tough for Mark Winterbottom this weekend - but it was the big points race on Sunday that was heartbreaking at the Coates Hire Ipswich 400.

The Ford Pepsi Max Crew racer's Championship advantage has continued to shrink as bitter Holden rival Jamie Whincup has applied the throttle to his title defence - and today Whincup leaves the leader.

However, 'Frosty' knows there's still a long way to go and vows to he will continue fighting after a blown tyre left him to cross the line in 22nd.

"Anything can happen, so you just keep fighting so you finish," Winterbottom told v8supercars.com.au after getting out of his Falcon.

"It's just a bad day for us, that's all... You never write yourself off, you can always get it right on the day when it's right. We're going to have to work hard to fix some of our weaknesses which will show up at (next round) Eastern Creek."

Winterbottom felt he had made inroads in the second phase of the race, after qualifying eighth, but lost the left rear tyre on his Falcon around two thirds of the way through the race.

"There's not much you can do about it once the tyre goes," he said.

"It's a bit of a shame because the car was pretty good in that second stint, so I think we would have been okay in that last stint, but we didn't get very far when the tyre went.

"Frustrating, but you just try and finish and keep pushing at the end for positions."

While he told v8supercars.com.au this part of the season was important - and that he, of course, preferred to be leading the points heading to the Pirtek Enduro Cup - Winterbottom believes the next event at Sydney Motorsport Park will be a challenge for the team.

"Where we struggled could go show up there, so you never know, you just go there and assess it after you go out. Some of the corners don't suit the way our cars are, where as this track sort of does a bit. It could be a tough one, but the enduros I think we'll be quite strong."

"It's promising to see Chaz up there and I think Scott Pye was up there as well, so it's good to see some of our cars go quick in the race."