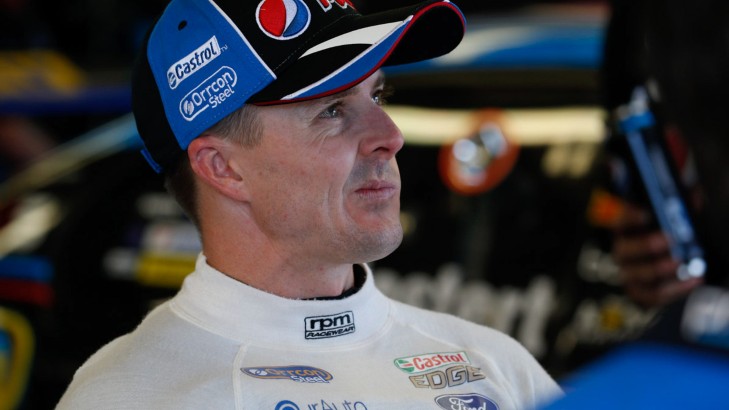 Championship leader Mark Winterbottom knows what he needs to do to ensure he doesn't relinquish the lead like last year.

'Frosty' believes he can get more out of his speedy Ford Falcon FG X and believes qualifying is the key to ensuring he doesn't slip from the top spot, as he did shortly after an ordinary Townsville round in 2014.

Winterbottom -who has been a consistent Championship contender, in the top five the past nine years -admitted he felt the lead about to fallaway at the mid-point last season. This time, blitzing qualifying was the first step to take, and the fact his Prodrive teammates were also quick meant improvements were flowing through the team.

"I think last year I thought I was driving really well at the start of the year, but I felt like it was only a matter of time before [I lost the lead], because when you're qualifying 10th, 15th, that a crash was always going to happen.

"You can't go through a whole year qualifying mid-pack and in between.

"Last year I felt like I was driving really well but didn't have the car to push on, but this year I feel like I can drive better with the car I've got."

The Ford Pepsi Max driver has earned four Championship race wins this season and one pole position this season, and believes he's able to get even more out of the FG X if he alters his driving style. In fact, he's looking to be more like young teammate Chaz Mostert, who has dominated qualifying this year and won two races.

"I don't think I'm maximising its strengths at the moment and we're still competitive," he said.

"You have to think this is one of our best shots - for the first time, Chaz [Mostert] is obviously really quick, [David] Reynolds is winning races...

"I know that when the car is how I like it I can be quick and that's confidence inspiring. My bad qualifying is second to his pole. He's finding it a little bit nicer to what I had been but our focus is to copy his style, copy his set up and be more consistent."

Winterbottom has earned three pole positions at the circuit but only one win, though the winner's list is limited with only four others in the field having stood on the top step at Townsville.

The circuit is unique in its combination of street and permanent circuit features -but for Winterbottom, a win in Townsville means the car is strong on all types of circuits.

"We haven't had a bit of a kerb like we're going to this weekend for four months," he said.

"We've developed the car a lot and this is the one we haven't revisited since Adelaide.

"Hopefully we'll have a good car and if we can win here, we can win anywhere and that's going to be important.

"I think our team need it, I feel like I need the confidence at a street track - because if we can win here, we can win at Gold Coast and the Championship always comes down to Homebush. They're very similar tracks and it is our weakness - Adelaide wasn't our best round. Hopefully we've fixed it."

Winterbottom's lead has stretched out to 95 points over Craig Lowndes, with a massive 286 gap to defending six-time champ and long-time key rival Jamie Whincup.

Winterbottom knows even small errors will be unacceptable at this level.

"Lowndes is going the best I've ever seen him go to beat Whincup the way he is - there's a lot of guys, if you just slip a little bit, they're going to pounce."

The Prodrive team has been pushing forward with development and Winterbottom said there were new bits on the car this weekend, as "always". Resting on their laurels was not the way to maintain and widen the lead.

"You've got to go in and attack," Winterbottom said.

"There's no point sitting on your hands and thinking you're that far in front because this race - two races, 150 points per day - one mistake, you lose the Championship lead.

"We need to make sure we maximise our gap... Keep pushing and be aggressive, and just try and win races."

Street fights are back

Dutton back engineering Whincup this weekend

Meet the drivers at tonight's SuperWelcome