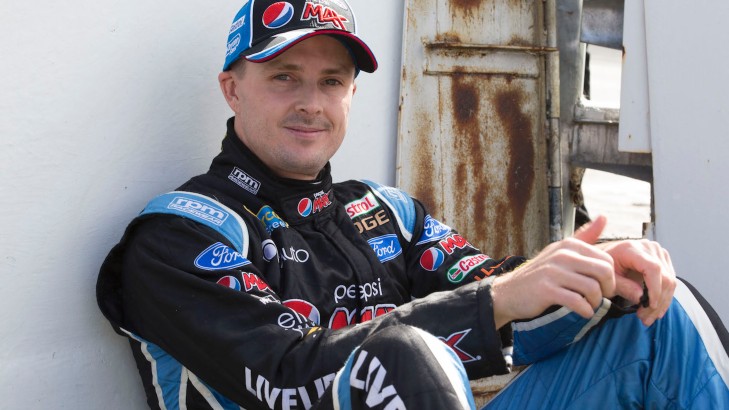 Mark Winterbottom insists he isn't feeling Championship pressure coming into the ITM 500 Auckland, a circuit that was arguably his most dominant in 2013.

The Championship leader is 258 points ahead of Red Bull rival Craig Lowndes and shifted the focus back onto the 2015 Bathurst winner, heading to a rare place Lowndes is yet to record a win.

While Lowndes took a chunk out of 'Frosty's' lead at the last event on the Gold Coast, Winterbottom said given the circumstances, that didn't diminish his confidence.

"No, not really," he told v8supercars.com.au when asked if he was feeling the pressure.

"There's pressure on everyone - everyone's trying to deflect pressure onto me but I'm 200 and whatever points ahead.

"He [Lowndes] hasn't won a championship since '99. Effectively in the modern era he's won Bathurst but he hasn't won the championship, so it's pressure on him as well.

"There's pressure on the guy in third - Dave [Reynolds] who's obviously just announced his new deal and wants to show our team the high at the end of the year and go to a new team.

"There's pressure throughout the whole field - so they're trying to focus on us, but other guys are under the same, if not more, in their situations as well."

Winterbottom was philosophical about the title fight despite being desperate for his first ever V8 Supercars championship trophy, in his 12th year of trying.

"If we're good enough we'll win; if we make mistakes, it'll be on at Homebush.

"We just have to be smart, back ourselves and know that 10 rounds of 11 we've had very good results, so we just have to live off the good ones."

The Castrol Gold Coast 600 was Winterbottom's worst weekend of the season, recording 23rd on Saturday after an unsafe release, drive-through penalty and front-end damage to his Pepsi Max FG X Falcon, and 11th on Sunday. But he isn't letting that affect his mindset.

"I thought I drove well at the Gold Coast, I didn't give away points because of mistakes I made," Winterbottom said.

"The pit lane one was costly, but in terms of how I drove I don't think I was driving bad, which is good for me personally - it's a confidence boost."

This weekend Winterbottom returns to Pukekohe, where he won the coveted Jason Richards Memorial Trophy last year after winning two of four 100km races and earning the most points in the field.

The format is different this time around but there's an expectation the fast, flowing circuit will suit the FG X.

"I like this track - I think we'll have good cars and stuff - but but motorsport teaches you not to rely on past results too much.

"The last two years we've actually been really quick here so it's a track I know I can drive well at and enjoy, but you can easily turn up and not be competitive.

"I love this place and if I could pick a round I could come to, to try and give myself a confidence boost I'd pick this as my number one track in terms of how I feel at it.

"We'll find out Friday if it's still good to me or if it's changed. There's been a bit of resurfacing and stuff so it's a bit different, but should be no different to the previous years hopefully."

The team has had extensive debriefs since the Castrol Gold Coast 600 and Winterbottom said there were no hard feelings in the team after the pit lane incident on the Saturday.

"Effectively it was one mistake," he said.

"You move on, you don't dwell on it. But you just have to make sure you address it and don't repeat it because it's a costly mistake ... hopefully show we don't make the same mistake twice."

The V8 Supercars have run at Pukekohe twice since returning to the track in 2013, with Jason Bright the other recipient of the Jason Richards Memorial Trophy. Bright and Winterbottom are the only repeat winners across the two years.