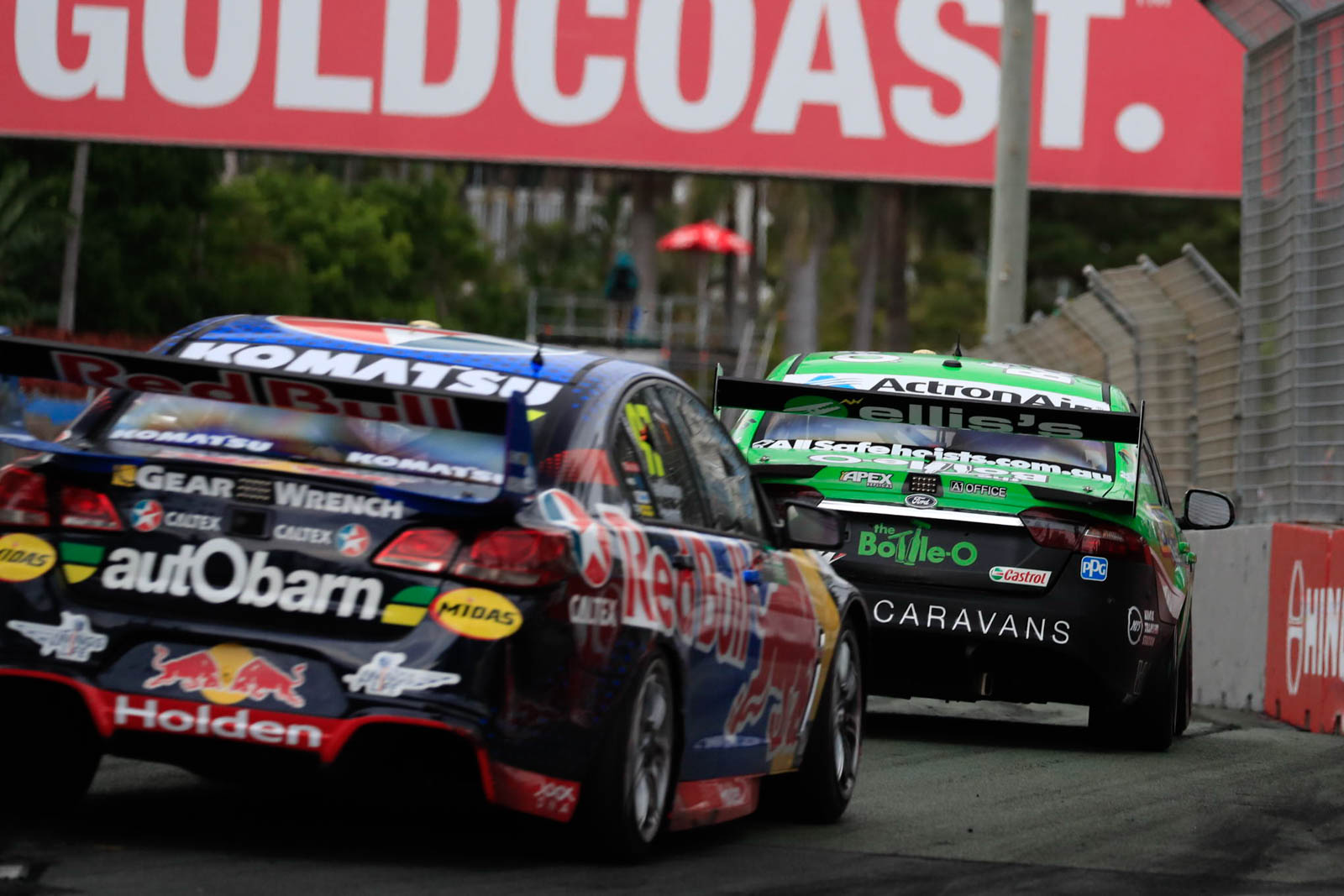 Driving standards and penalties have been a big talking point after the last two rounds, with the controversy of Bathurst and huge accident with Garth Tander and Fabian Coulthard at the Gold Coast.

I had a moment myself with Scott McLaughlin at the end of the Gold Coast race, and a smoking tyre due to a rear guard bump from Van Gisbergen. My view is the current rules are encouraging people to pass, but the onus is on the guy getting passed as well as the driver making the move.

You’ve got guys having a big crack, which is awesome – you want the racing to be hard and fast – but you need the guy getting passed to have some sort of knowledge of what’s going on as well.

If I’d turned in when McLaughlin was coming down the inside locked up, it would’ve ended up being a grade two charge for him. But knowing he was coming, my instinct was to protect the car instead of damaging it and ruining our race, we had run a clean race all day and we were in the closing laps, so I turned away and avoided the accident. If I’d turned in, he gets a drive through – that’s where driving standards in the sport are sometimes a bit hard to judge. I saw the pass was happening and avoided it, but it’s a fine line sometimes to work out who’s at fault.

There’s always two parties. If Whincup had passed McLaughlin at Bathurst and he didn’t turn in, there’s no issue, the race goes on. The fact that he turned in creates this ambiguity around who’s at fault. It would’ve been exactly the same scenario at the Gold Coast – probably worse, because we both would’ve been in the fence and that isn't what our teams or sponsors want.

So both were a similar scenario, but the guy getting past chose two different options – it’s hard, but you call it a grade one or two offence based on the awareness of the guy who is getting passed and how much he is going to defend.

I think, good end or wrong end of it, Bargs [driving standards observer Jason Bargwanna] has done a good job. He’s not bullied into making a decision, he doesn’t care which car it is, if he believes in his call he sticks to it and that’s what you need.

This is not directed at Bargs, but there is one thing I disagree with – the redress.

It doesn’t look professional and I think it causes more issues than what it gains.

If I could change one thing, I’d change the redress because it definitely disadvantages more cars and could cause a major shunt.

It looks silly having cars pull over – I always knew at the biggest race of the year it would come undone, and it did at Bathurst.

What you can do now is effectively make contact with someone, bump them and redress it – you might make contact and bend that guy’s steering and then redress it and that is deemed ok, but the other guy goes down the order because he has bent steering. The charge is still a grade one.

Van Gisbergen hit me in the rear in the closing laps at Gold Coast bending my guard on to my tyre which started smoking, but if that tyre blew he wouldn't have been penalised – however, my day could have been over. He was faster, he needed to be patient and make a clean move a few corners later.

The redress is always going to compromise someone, whether it’s position, damage, lap time, or bunching the field up. It might not make an impact on that corner, but five corners later it can unfold – it’s like a safety car restart, disadvantaging guys even though they’re not viewed as being disadvantaged.

A major shunt will happen – normally if there’s cars going slow there’s white flags waving and they make you aware, but there’s no warning, there’s no time for it as the car just pulls over and slows when they want to.

I was charged for doing a burnout on track for effectively doing the same thing – pulling over after a race and going slow. The cars have finished the race, though it’s seen to be dangerous.

In race mode when everyone’s going hot and flat out it’s ok.

Some people love the redress, some hate it, but in my opinion I don’t think it’s the right way to go. The racing’s been really good, I don’t think that has made it more competitive, I think it has made it more dangerous with more damage. You want people to have a go but at the same time, the guy passing and the guy being passed, both have got to have equal responsibility and if you do the wrong thing it’s a drive through or points penalty in my view.

While HRT thought the penalty Garth Tander was given after his accident with Fabian Coulthard on the Gold Coast was harsh, I think it was ok [a PLP and 10 grid spots on Sunday].

The only reason he got any overlap on Coulthard was through illegal driving, so in the current rule system he would’ve had to redress. There was no benefit in being that aggressive. Under acceleration, bumping someone to get a run on them is clear cut the wrong thing to do – we all know that – so the fact that happened and then the crash happened after, I think that was a massive no-no.

They are lucky they fixed the DJR Team Penske car for the next day because that could’ve put him out of the weekend. And why should he be out and the other guy still get a ticket to race?

I’m sure deep down Tander knew he was in the wrong because on Sunday he changed his attitude towards it. You always get protective because it’s your own ability and credibility on the line, but if they don’t look at it and go ‘ok, I’ve contributed to that’, no penalty is big enough.

Those things are avoidable – like my McLaughlin thing, it’s avoidable. You don’t want to be a pushover but he caught me from a long way back, he was faster and we are in $500,000 pieces of equipment, you think about safety – you’ve got to be smart at times.

2016 ITM Auckland SuperSprint  ›
Stay In The Know
Sign up to the Virgin Australia Supercars Championship Newsletter
This website uses cookies to improve your user experience. By continuing, you will be providing your consent to our use of cookies.Ok