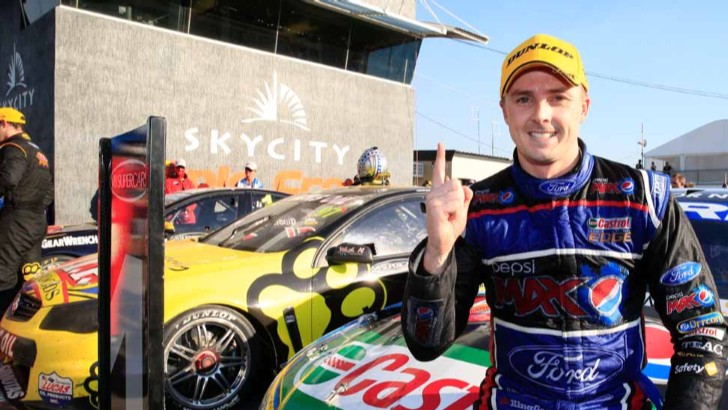 There was uncertainty of whether he could hold on late in the race, with speedy Kiwi Shane van Gisbergen powering on, past Jamie Whincup in third to latch on to the back of the Pepsi Max Falcon.

The mixed tyres made it an intense strategic battle over 69 laps, with many of the field starting on Dunlop soft tyres, though the Red Bulls filling the first two grid spots did not.

An early safety car for Robert Dahlgren, whose Volvo suffered from a sticking throttle, played into their hands and raised question marks of whether those who started on softs had lost their advantage.

But by just 0.534sec, Ford's Winterbottom brought it home, showed us why he's the Championship leader, and cemented another 200km race win for FPR after teammate Chaz Mostert won the Sunday race in Perth, and Frosty the two prior in New Zealand and Winton.

"It's an incredible race - it's good to have those different formats, tyres with some on hards and some on softs," Winterbottom said.

"Shane was coming, but it's awesome - I'm so happy we won. It's good to bounce back from yesterday."

Van Gisbergen felt Frosty was struggling with grip, but said once he passed Whincup for third he only had one more lap in his tyres to pass for the win.

"I gave it everything," the VIP Petfoods TEKNO Autosports driver said.

Whincup pulled aside and let van Gisbergen through in the closing laps - he said he wanted to see a battle, and he didn't have enough life in his tyres to pressure Frosty.

"Shane was much quicker, our tyres were well and truly gone," Whincup said.

"I wanted to see a race, to be honest. I knew I was going to challenge Frosty, thought I'd let Gizzy through and see what he could do. I was a spectator like everyone else."

Two of the Championship's top four had horror results, with Lowndes finishing 17th and Fabian Coulthard 22 after a strategic error from Lockwood Racing.

Others to note include Erebus' Lee Holdsworth in 12, Chaz Mostert 15 and Jason Bright 20th.

The result means Winterbottom extends his points lead, which was 101 coming into the weekend and is now 161 over Lowndes.

Whincup has moved up into third in the points as Fabian Coulthard falls down to fourth.

The V8 Supercars are next on track from July 4-6 at the Castrol Townsville 500 - Driven by TAFE Queensland.

Mark Winterbottom  ›
15' Red Bull Racing Australia ›
2014 SKYCITY Triple Crown Darwin  ›
Stay In The Know
Sign up to the Virgin Australia Supercars Championship Newsletter
We use cookies to ensure that we give you the best experience on our website. If you continue to use this site we will assume that you are happy with it.Ok