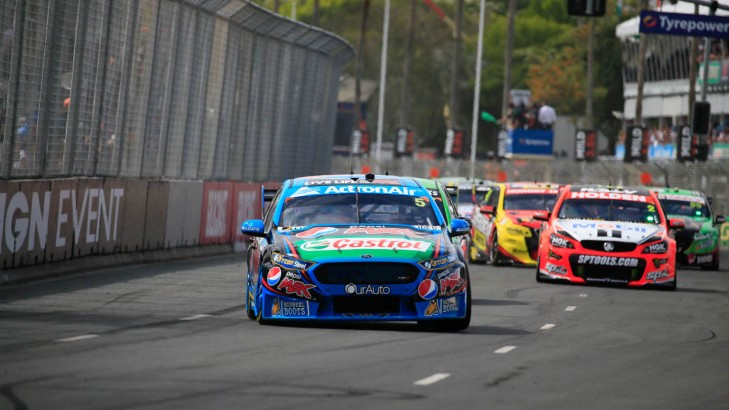 Gold Coast winning co-driver Jack Perkins believes Craig Lowndes has momentum on his side as he fights Ford rival Mark Winterbottom for the 2015 V8 Supercars Championship.

Perkins raced his last event for 2015 on the weekend and earned his first V8 Supercars race win with James Courtney on Sunday, after filling the primary driver role at the previous enduros with the Holden Racing Team.

After a tough run for Winterbottom and the Prodrive team on the Gold Coast, Lowndes' deficit is now 248 points, with three rounds remaining and a maximum 900 on offer.

"The best strategy is normally car speed - if you've got car speed, very rarely do you lose a race," Perkins said last night on Inside Supercars.

"Earlier in the year the PRA guys and Mark in particular had that. But now Chaz is gone they seem to have lost a little bit of momentum there and I think the momentum is with Red Bull."

Winterbottom is clearly in the best position in his career to win the V8 Supercars Championship and while his lead is still significant, he will need to finish in front of the #888 Commodore to keep it that way.

"I think Lowndesy's in a good position here, there's not much pressure on him - there's more pressure on Mark and I think Craig's got the car speed," Perkins said.

"They were incredibly fast at Bathurst - both cars - it didn't look like anyone was going to beat them there.

"And then on the weekend on Saturday Lowndes had tremendous pace and even the first half of Sunday's race, on speed, they were there."

Lowndes, teamed with Steven Richards, won Bathurst ahead of Winterbottom and Steve Owen, and capitalised on Prodrive's poor weekend at the Gold Coast underlined by the pit lane release bungle in Saturday's race.

The least fruitful enduro for the #888 was the Wilson Security Sandown 500, where Winterbottom won and Lowndes finished 13th.

It started on the wrong foot for Lowndes, who got together with Perkins in the main drivers' qualifying race on Saturday and was handed a drive-through penalty, as the #22 was sent back through the field. They started 23rd and 24th for the 500km race on the second last row.

V8 Supercars great and Inside Supercars panellist Mark Skaife earlier this year said Winterbottom must win the title this season or he never would.

While he has been outspoken about Lowndes being a hot favourite for the title, his opinion was measured last night, given Frosty's recent statistics.

"He's got to make sure he doesn't give away a massive lead," Skaife said.

"Two hundred and 48 is still almost a round - so that's a big objective.

"Given their form and his pace throughout the year - coming into this weekend finishing 15 of 25 races on the podium - so 60 per cent of the time Mark Winterbottom has been on the podium.

"So anytime you can do that you'll be at the pointy end somewhere."

Lowndes believes the fight is on and was brimming with confidence after his performance on the Gold Coast.