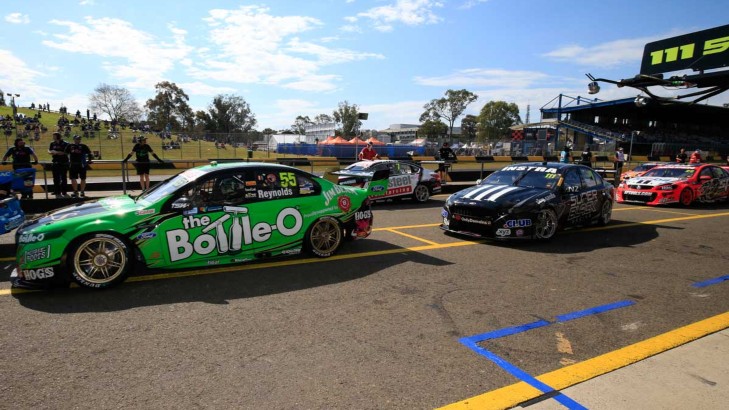 Championship leader Mark Winterbottom has called for a qualifying revamp as formats are being discussed for 2016.

While Winterbottom has been one of the men setting the pace this season, he believes the current qualifying format is not as exciting as it could be for those watching at home. He would like to see a return to the 'knockout' system used from 2007 to 2009.

Similarly to what is done in Formula One, the knockout system set the grid in three phases. Drivers would battle the clock to set the quickest lap to progress through to the next session, with viewers focused on those drivers on the cusp of making it -or not making it -through for the chance to secure pole position.

With Saturday's format recently scrutinised and changed to an all hard Dunlop tyre, then all soft tyre qualifying and race for each, Winterbottom believed changing qualifying rather than racing was a way V8 Supercars could improve the spectacle.

"I thought qualifying could've had a revamp because qualifying is a bit average the way the format is," Winterbottom, who leads the Championship by 174 points, told v8supercars.com.au.

"Everyone sits in pit lane, it's boring.

"If there's no excitement you go out, podder around on warm up tyres, warm your car up then go out. It's a real anti-climax, qualifying.

"To make that more enjoyable, more interesting I think the rest will flow on from there ... the fans have got to get the best for what they're paying for."

He believes the knockout system is the way to go, and with the right allocation of Dunlop tyres, cars could switch between compounds for each phase of qualifying.

"I think they could do a knockout system like Formula One, just do that and wherever you qualify you start those two [Saturday] races," he said.

"Mix and match however you want to do the formats, but actually make qualifying a good one.

"Have one set of hards, one set of softs -people might get into the top 10 with hards or softs.

"Whatever it is, revamp qualifying a bit to make it more interesting."

Stablemate David Reynolds - who has also featured regularly at the front of the field this season - was adamant tyre allocations would need to be revised to match the chosen qualifying format. The Commission is yet to determine allocations and compounds, after a tyre test with Dunlop and Red Bull on Monday at Queensland Raceway.

"We can't have it now because we don't have the tyres to do it -so it's simple," Reynolds told v8supercars.com.au.

"But I used to really enjoy that style qualifying, I think the knockout style qualifying was good -I was part of it in 2009 and I quite enjoyed it. Obviously I was a rookie then and I was learning so for me to make it into Q2 or Q3 was a big effort."

Now, Reynolds said, there is immense pressure during qualifying -ultimately, one lap sets up the weekend. But from a viewing perspective, he described it as another practice session.

"We get one lap in qualifying and it's almost always at the end in the last couple of minutes," he said.

"One set of tyres have got one lap and that's your weekend -it is a shootout ... that sort of sets up your day, whether you have a good or bad day. So there's sort of no redemption from that, so there's a lot of pressure in qualifying."

The rush in the final stages of qualifying saw contact in pit lane between Shane van Gisbergen and Rick Kelly on Sunday at Sydney Motorsport Park.

While the hit went unpenalised, it demonstrated the urgency and desperation of drivers to get out of pit lane ahead of others to ensure time on-track to set their lap.

While Kelly wasn't willing to weigh into the qualifying debate -saying his job is to make the most of the formats that are decided on- he did note that the final minutes seem to be getting more and more hectic each race.

"Same thing that happens in every qualifying ... everyone waits until the last couple of minutes, wait until someone pushes back and they react to that," he said.

On the other hand, V8 Supercars Hall of Famer, former Commissioner and FOX SPORTS commentator Mark Skaife believed there was no need for a change.

"I think it's fine -we mess with formats and things way too much," he told v8supercars.com.au.

"Short qualifying sessions like that, they deliver unpredictable results - so you see one guy might be up the front for one and down the back for the other.

"Again on the weekend the soft tyre race was better than the hard tyre race, but the knockout stuff ... I just don't like making change for the sake of making change."

Formats for 2016 are currently being discussed in the lead up to the release of next year's calendar.