Mark Winterbottom has backed Prodrive stablemate and Darwin race winner David Reynolds, saying the Bottle-O racer has proved he deserves his seat on tonight's episode of Inside Supercars.

While the relationship between the two fractured after a clash in Darwin in 2013 - when Winterbottom hit Reynolds, taking him out of the lead of the race - 'Frosty' has declared his stablemate right for the job with Reynolds' contract expiring at the end of 2015.

"He's a great guy to work with, he brings a different perspective to the table," Winterbottom said on Inside Supercars.

"Dave's proving that he doesn't want to go. He's driving for his career I guess - the papers have said - but when you're winning races you're the best in that race and in the category at that time, so how do you move a guy on that's just won a race?

"He's a good fit, he's been there a long time, the sponsors love him, the team love him, we love him so the thing's up to the team and what they want to decide."

Reynolds' win on Sunday is his first since the Gold Coast in October 2013, but he has been up the front this season with nine top 10 finishes from 15 races, as well as having had a good shot of a result in Tasmania, starting off the front row before a clash with Lowndes.

Young gun Cameron Waters - who is signed to Prodrive and running its V8 Supercars Dunlop Series program this year and leading that Championship - is looking for a way in and has been the suggested alternate if Reynolds does not continue on with the Ford team.

"It's a tough sport - we've got Cam Waters who is knocking on the door - but he [Waters] deserves a drive. He deserves to be in the main series...

"But if there's not a spot at our team, then he needs to go somewhere else," Winterbottom said before putting it to fellow panelist Rick Kelly, "if you've got a spot Rick you should be signing him up because he's a good young kid." 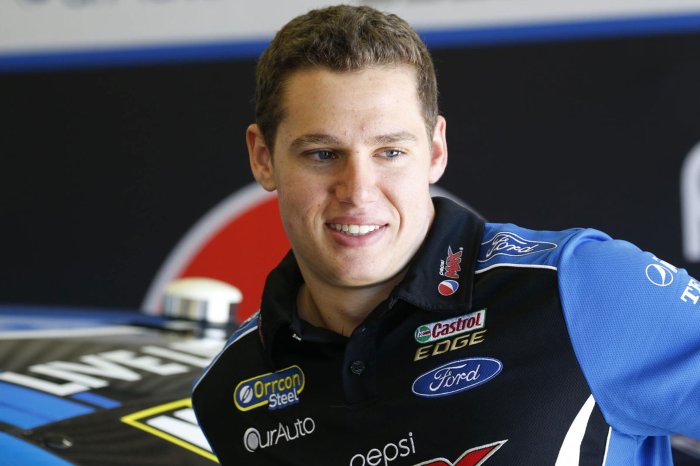 Panelist and V8 Supercars Hall of Famer Mark Skaife explained how he helped renowned joker Reynolds find his focus, after The Bottle-O racer called him for help admitting he needed to improve.

"He's a great young bloke, I really like him he's a great character and a real talent," Skaife said of Reynolds.

"He called up and said, 'I need to get better at this'. And you've got to take that into perspective - you're a professional racing driver and you do want to get better - to make that call is a pretty bold call.

"I hooked him up with Noel Blundell, who I reckon is one of Australia's best psychologists, and they've really made ground.

"I've been really proud of the way he's applied himself, he's a different young guy - he's more serious, more organised and he makes less mistakes, and it was a really good win on the weekend."

Winterbottom added he had also worked with Blundell - "I wish I was still working with Noel, I should probably get in touch with him," he noted - and agreed that help would be beneficial for Reynolds, given the incredible and unique pressures placed on drivers.

"Dave's probably needed that, he's a character and he can sometimes lose focus a little but and what Noel's good at was he tests you ... and he makes you concentrate," Winterbottom said.

"Dave's quick, he proves he's quick and sometimes he goes wandering. Someone like Noel's perfect for him. He's shown he deserves his seat for sure."

Kelly - who Reynolds raced for in 2011 - said Reynolds needed to be in the right environment to really get the most out of himself.

"Dave's a guy that you need to build everything around. If you can do that he's very successful," the Nissan driver and team boss said.

"I remember when he was in our team he came in, he showed potential and we had an engineer and him who really clicked, and he was untouchable in the car. You look at his data and go I don't know how he's doing that, so you just need to be able to extract that from a guy like Dave, he does need a bit of assistance to do it."

David Reynolds  ›
15' The Bottle-O FPR Ford ›
15' Pepsi Max Crew ›
Stay In The Know
Sign up to the Virgin Australia Supercars Championship Newsletter
This website uses cookies to improve your user experience. By continuing, you will be providing your consent to our use of cookies.Ok