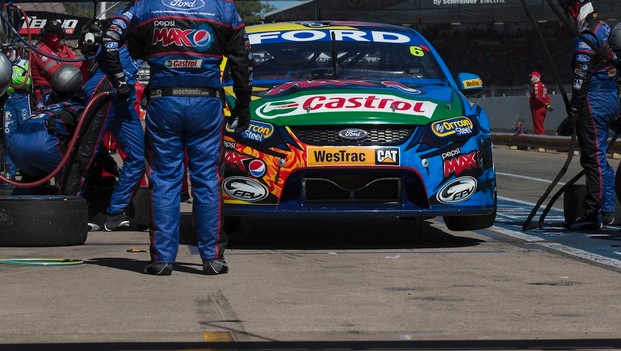 Fast, problem-free pit stops this weekend are FordPerformance Racing’s objective following an intense few weeks of review andtraining for a pit crew the team admits is down on confidence.

Most recently a cross-threaded nut in the third race of theAustin 400 cost Mark Winterbottom a great shot at victory, but the factory Fordteam’s pit stop issues began at the season-opening Clipsal 500 and have also affectedDavid Reynolds’ Bottle-O Falcon and Alex Davison’s Jeld-Wen car.

Some of the issues have been mechanical failure and somehuman error. It’s the latter that is proving harder to solve, admits FPR teamprincipal Tim Edwards.

“The more people focus on us having a few pit stop issuesthe more pressure it applies to the poor guys and then they are nervous becausethey are under pressure and when you are nervous you tend to make mistakes,” heexplained.

FPR devoted a part of its recent Winton test specifically topit stop practice. They were filmed and later reviewed for technique back atthe workshop in slow motion on a big screen with the crews in attendance.

Allocating specific time at a test day to pit stop practiceis new for FPR, but it has been filming and reviewing stops for years.

There has also been an increased emphasis on physicalfitness and training. The crews complete daily pit stop practice at theworkshop and do a minimum three gym sessions per week, completing programsspecifically tailored to their pit stop tasks.

“Particularly over the last couple of months there has beena lot of work with the pit crew in terms of their fitness, their corestrength,” Edwards explained.

“They are also doing extra in their own time because theydon’t want this, they don’t want to be embarrassed by this pit stop issue. So wejust have to support them and work through it and give them every bit of helpthat we can.”

He acknowledges it has been a dramatic fall from grace for ateam that was the pitlane pace-setter.

“Don’t worry, it’s not lost on us and we certainly intend toget back there, but confidence is a huge amount of it… trying to change a wheelin three seconds is not an easy feat and if your confidence is just a bit downyou are more prone to making mistakes.

“But it’s all the same people so I have no doubt we will getback there. We just need to have a run of a couple of races without an issueand nobody will be looking at us and we won’t have any problems and then wewill start smashing out – as we were before – really good pit lane times.”

Under current regulations a quick two tyre stop averages outat about 3.5-4.0 seconds. A quick four tyre stop is about 4.5 to 5.0 seconds.

FPR initially encountered issues with nut jamming in the new18-inch control wheel. It has also encountered cross threading. Winterbottom’sAustin problem was a new issue, which Edwards said the team has resolved.

“Through the year we were looking at physical parts to seewhether we had dodgy wheel nuts and all those sorts of things that you workthrough, and we have found little bits and pieces along the way,” he said.“There has not been one thing where we have gone ‘oh, that’s the holy grail’but ultimately a lot of it is controlled anyway because everyone has the samewheel nut and it is a control design.”

David Reynolds  ›
15' The Bottle-O FPR Ford ›
15' Pepsi Max Crew ›
2013 SKYCITY Triple Crown  ›
Stay In The Know
Sign up to the Virgin Australia Supercars Championship Newsletter
This website uses cookies to improve your user experience. By continuing, you will be providing your consent to our use of cookies.Ok