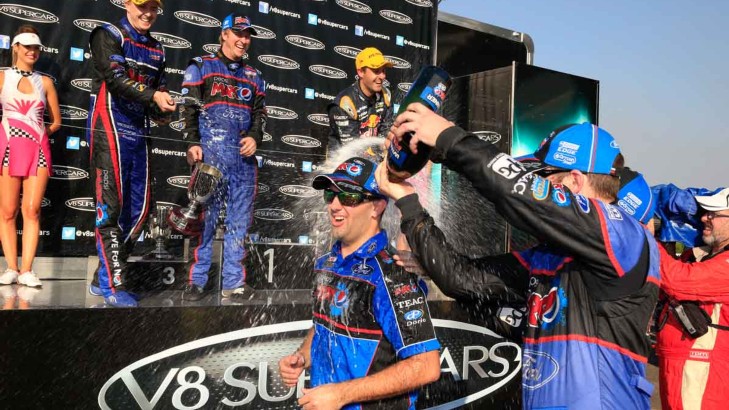 Mark Winterbottom leads the Championship after the strong points hauls, which include wins at the most recent SKYCITY Triple Crown, Pukekohe and Winton.

Each has been a spectacular result, Winton his breakout win for 2014, Auckland where he clinched and left with the Championship lead, and Darwin edge-of-the-seat stuff Frosty called 'better than Bathurst'.

Throw in a podium in Perth and his young teammate Chaz Mostert's first win for FPR and the team looks unstoppable in the 200km dashes.

Winterbottom's race engineer Grant McPherson said the Darwin win was the most complex by far and while strategy played a huge part, it was Frosty's sheer ability to adjust his racing style in the various stages of the 69-lap race.

"Mark was fast and he drove bloody well," McPherson said when asked what the key to a 200km win has been.

"The car was good - better than the rest of the weekend. The strategy was ok, it would've been better without a safety car. But there's no substitute for car speed and that's what got it there at the end."

McPherson, who has been with FPR for eight years this season, agreed the Sunday of the SKYCITY Triple Crown was one of the best V8 Supercars victories he had been a part of.

"It was one of the great ones for FPR," he told v8supercars.com.au.

"It's a race we probably shouldn't have won after the Safety Car came out. To come from 10th on the grid, back our strategy and the preparation of the boys, that the car was going to be fast, that we can move forward and reuse tyres, it all played out...

"It's fantastic - we've done it on the hard tyre, on the soft tyre and optional mixed tyre now.

"We've still got our issues we've got to sort out, but if we can win races with problems we will be even stronger when we can sort those out."

McPherson seems to be going from strength to strength with the car #5 crew. Having engineered Will Davison last year at FPR, he heads to a circuit where they had a dominant win in 2013in Townsville, and as Winterbottom's data engineer back in 2010.

"It's going to be fun - we weren't that good on a hard tyre (in Darwin) so we have to make sure we're good on a hard tyre in Townsville, that's the way it is. I've got not doubt we can be competitive we can push for that fifth FPR Sunday race in a row."

The driver-engineer relationship has been an element of V8 Supercars in the spotlight after Red Bull Racing Australia split the Championship winning combination of Jamie Whincup and Mark Dutton this season, so Dutton could move up into the vacant team principal role.

Winterbottom has said he has found it weird hearing Whincup speak so often about gelling with new-for-2014 engineer David Cauchi, after he has worked with three different race engineers for the past three years and always found himself in Championship contention.

McPherson emphasised how well the two understood each other, enhanced by the fact they have worked together before,though in a different role.

"We worked well in the past when I was his data bloke and we're working well now.

"He's good at what he does, he gives feedback I can work with and he drives well - I can't ask for much more than that.

"He's one of those top six guys that if you get the pleasure of engineering them, it makes your job easier. We're mates but it's a technical working relationship and it works really well."

While his lead looked vulnerable after Saturday's two runs, Winterbottom's advantage has blown out to 161 points over Craig Lowndes, with Whincup also lurking 186 points away.

The V8 Supercars will be back on track in less than a fortnight for the Castrol Townsville 500 - Driven by TAFE Queensland. Winterbottom has one victory at the circuit while Whincup has five from 10 races, so the rivalry is sure to heat up on the streets.

Given it is one of the Super Street events, Sunday's race will be even longer, a 250km dash this year.

Book your tickets now - best views are from the grandstands.

Mark Winterbottom  ›
15' Pepsi Max Crew ›
2014 SKYCITY Triple Crown Darwin  ›
2014 Castrol Townsville 500 – Driven by TAFE Queensland  ›
Stay In The Know
Sign up to the Virgin Australia Supercars Championship Newsletter
We use cookies to ensure that we give you the best experience on our website. If you continue to use this site we will assume that you are happy with it.Ok