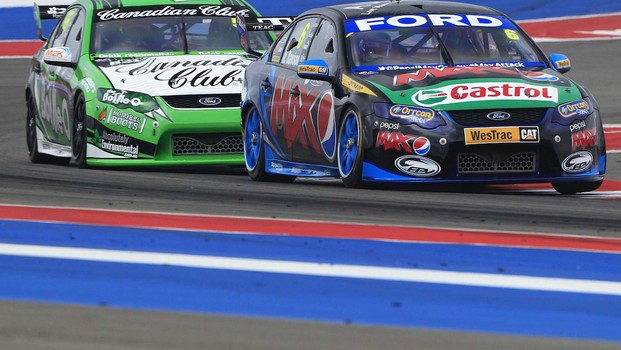 Ford Performance Racing is aiming to return to the podium at one of the team’s favourite tracks this weekend as racing resumes in the heat at Darwin’s Hidden Valley Raceway for the SKYCITY Triple Crown.

FPR’s current crop of drivers has secured pole for the last six-straight races in the Northern Territory with the team even securing a 1-2-3 lockout at the track last year while it was still a three-car operation.

Qualifying form aside, all four drivers know the team must rebound strongly after its tough Texas trip. They believe gains from last week’s Winton test can start to filter through and bring improved pace beginning this weekend in Darwin.

But the biggest challenge of the weekend? Tyres.

"I feel the whole category is short one set of tyres for the weekend so tyre management is more important than ever," Mark Winterbottom said.

Will Davison agrees the tyre allocation is limited in Darwin.

"The tyre allocation will be the tightest for the year so far and with hard tyres Saturday and then one set of softs for each qualifying session and race on Sunday it will make things really challenging," Davison said. "It will certainly be an action-packed weekend.

However Davison, who now sits third in the Championship points, feels some strengths in the old car would "carry over" to his Car of the Future Falcon this weekend.

"After testing we have some new things we are going to put into play so I am keen to see how they translate in Darwin’s unique surrounds. The crew has done a lot of work on pit stops so that should also bring gains."

The Bottle-O Ford driver David Reynolds is looking forward to seeing how changes to his car play out on-track.

“Generally Hidden Valley is one of the better tracks I go to so I look forward to the trip north," Reynolds said.

"We had a decent test and we are going there with a different set-up to normal, so hopefully that will help bring a better result. As always it will be hot so driver fatigue, especially come Sunday, will play a part. Tyre management will also feature so there are a lot of factors that make this a fun yet challenging event.”

Fourth FPR steerer Alex Davison heads to Darwin with some confidence, having had positive results at the Top End in past years.

"I really enjoy racing in Darwin and I know the track well and have had success there in the past," he said. "That helps with your preparation and means I go there with a high level of confidence. The characteristics of the track are most similar to Barbagallo in Perth which has been our best event so far, so that is a real positive. Austin was a bit of a blip but I believe at Darwin we will regain the form we’ve had at previous rounds.”

Team Principal Tim Edwards believes the weekend will be a good one for fans of the series.

"This year’s race has a new format and a unique tyre allocation so mix that in with the high temperatures and close racing we always see in Darwin and fans should see some great racing," Edwards said. "We always enjoy huge support from Ford fans in the top end and we plan to give them something to cheer about."

David Reynolds  ›
15' The Bottle-O FPR Ford ›
15' Pepsi Max Crew ›
2013 SKYCITY Triple Crown  ›
Stay In The Know
Sign up to the Virgin Australia Supercars Championship Newsletter
We use cookies to ensure that we give you the best experience on our website. If you continue to use this site we will assume that you are happy with it.Ok