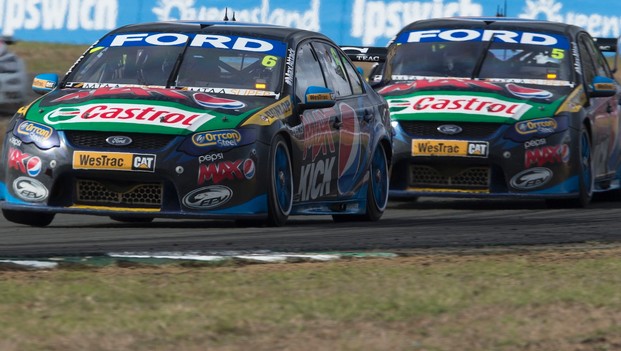 Ford Australia president and CEO Bob Graziano will be at Bathurst next weekend, but he insists only to watch the racing not confirm ongoing sponsorship of his factory race team.

Nevertheless, speculation continues to build that the protracted negotiations over the future of Ford Performance Racing are close to resolution.

And the expectation is the news will be positive for blue oval racing fans.

“We are in conversations with the team and we are both comfortable where we are at right now,” Graziano told motoring.com.au.

“And I know there are folks who are thinking we are late in terms of making a decision but where we are from a company and team perspective we are both comfortable.”

Graziano would not comment on whether a decision had been reached, while FPR team principal Tim Edwards told motoring.com.au last Friday afternoon that no contract had been signed.

He agreed with Graziano’s description of both parties being “comfortable”.

Edwards confirmed that negotiations with out of contract star driver Will Davison had been postponed partly because the new deal with Ford had still to be sorted.

“It is kind of linked. We are still in discussions. We will sit down after Bathurst and nut it out. It is the wrong time of year right now to be finalising that stuff.”

The future of Ford’s V8 Supercars involvement has been under question ever since the company announced it was pulling out of Australia as a manufacturer and killing off Falcon no later than October 2016.

FPR’s multi-million dollar contract has come up for renewal as Ford faces an expensive exit from local manufacturing and the termination of the Falcon nameplate.

The team, which was purchased by racing identities Rod Nash and Rusty French from Prodrive last summer, has been the focus of Ford’s V8 Supercars effort for several years as the number of Falcons on the 28-car grid has shrunk to just six, four run out of the FPR stable in Melbourne and two by Queensland-based privateer Dick Johnson Racing.

There have been reports that Ford is considering a cut-price one year continuation of its sponsorship or also mulling over a multi-year extension.

“I honestly don’t have any plans to make any announcements at Bathurst,” Graziano said. “I am actually just going up to watch the race, I am hopeful the boys will pull off a win. It would be great. I feel very good about it.”

Graziano played down reports that he had had to overcome significant internal opposition to a new FPR contract from FoMoCo headquarters in Dearborn, where bean counters were said to be perturbed about the prospect of spending money racing a car that will soon be killed off.

“Anytime we have to make big decisions we try and leverage the expertise form around the world,” Graziano said.

“We have some motorsport experts in Dearborn that we leverage and people may interpret that as jumping through hoops, but if I go back to get somebody’s perspective on something it doesn’t mean we are jumping through hoops. It means I am trying to leverage the best and brightest that I can within Ford Motor Company.”

FPR heads to the Supercheap Auto Bathurst 1000 with Davison lying third in the Championship and a resurgent Mark Winterbottom fourth. It has three legitimate shots at victory in the race – the Davison/Steve Owen and Winterbottom/Steven Richards Pepsi Max Falcons and the David Reynolds/Dean Canto Bottle-O satellite entry that finished second last year.

Established in 2003, FPR has yet to win Bathurst or the V8s Supercars championship and has had some spectacular failures along the way. It has been the subject of intense media scrutiny since last month’s Wilson Security Sandown 500 where third place finishers Davison and Owen were critical of having to ‘stack’ in pitlane and Winterbottom was delayed for the eighth time this year by wheel nuts jamming at a tyre change.

But Graziano was at Sandown and defended the team and the relationships within it.

“People assume there is potential acrimony within the team. I have never seen that when I am there with them,” he said.

“I have seen the drivers and the way they interact with each other and the team… I didn’t recognise that when I have read articles where people have speculated there is perhaps some dispute within the team. Personally I have never seen that.”

He said such negative publicity would not impact on a renewal decision.

“We have to look at investments based on what those investments return and I am not swayed by speculation one way or another.”