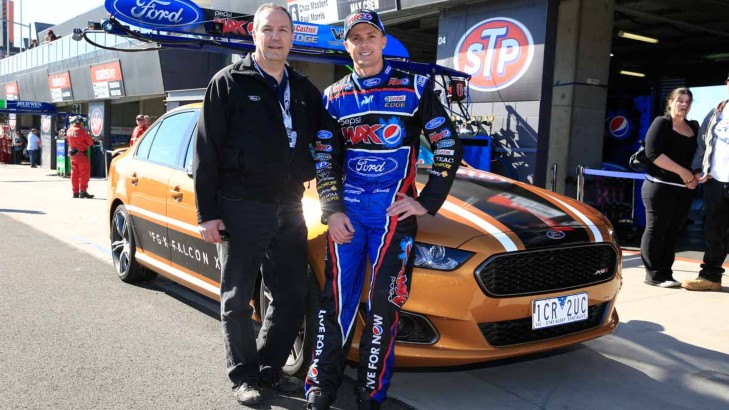 Ford Australia President Bob Graziano says negotiations continue with the blue oval V8 Supercars teams about continuing sponsorship beyond 2014 and no decision will be announced before the end of the championship.

Graziano was speaking on Saturday morning at the Supercheap Auto Bathurst 1000, the day after News Limited reported that Ford was planning to exit the sport.

FPR's one year deal with Ford expires at the end of 2014 while the new Penske-owned team is currently a privateer.

Despite the uncertainty, Ford Performance Racing and DJR Team Penske have confirmed they will race the new Ford Falcon FG X in the V8 Supercars Championship.

"We are working with the teams now and any announcements we have will be after the season is over and that hasn't changed," Graziano told v8supercars.com.au.

"I will not comment on speculation. We are in discussion with the teams and that is all I am going to say."

Graziano drove a new FG X Falcon XR8 to Bathurst from Melbourne on Friday and was at the track Saturday morning to watch FPR star and defending race winner Mark Winterbottom take contest winners for a lap in the new car, which goes on-sale in November.

"I am here to support the team and see Frosty take it back to back," said Graziano. "We are here talking about the new XR8 and the teams have talked about homologating the 2015 Falcon. And that's the story."

The FG X is the final Falcon to go on-sale before Ford shuts its local assembly facilities down no later than October 2016.

The death of Falcon and the switch to importer status means the traditional Ford Australia business model is under review, including its investment in motorsport.

"We have our plan we are working to," said Graziano. "There is a lot that is going on at Ford right now; there are new products that are coming in, new processes that are coming in and we have a lot of new models we are launching, including the new Falcon."

Graziano acknowledged he was aware of the feedback from fans about the reports of Ford's exit from V8 Supercars.

"I have seen some of that in the media obviously and that's what you love about this sport. People are blue or they are red and I have loved that since I walked into Australia and went to my first race at the Clipsal.

"It's a great sport and I love the fans that we have got and the teams we have got. But right now we are focussed on 2014 and Bathurst."

FPR co-owner Rod Nash confirmed Graziano's timeline of an announcement post-season and that negotiations were ongoing.

"Everyone would like this (negotiation) finished including us," said Nash. "But this is very complex."