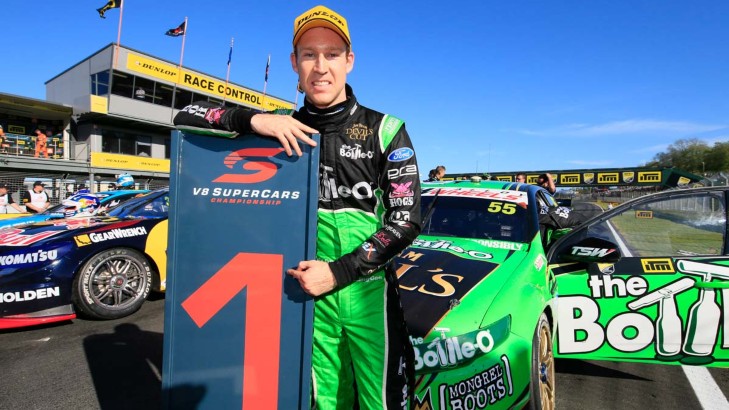 Championship contender David Reynolds is sure his performance won't be affected by a foot injury as he prepares for the WD-40 Phillip Island SuperSprint this weekend.

Reynolds posted a photo on social media last week revealing he had been diagnosed with collapsed bone in his right foot, and while it may impact his training regime, says the injury doesn't affect him in his Ford Falcon FG X V8 Supercar.

The Bottle-O racer sits second in the Championship standings, 239 points behind teammate Mark Winterbottom, and just one point ahead of Red Bull's Craig Lowndes.

"About two months ago I had a sore foot and it has been lingering for a long time - did an MRI last week and it turns out I have a collapsed bone in my right foot, which I call my 'money foot'," Reynolds said.

"It's not really painful or anything, it just annoys me.

"It just stops me from training [and] walking a lot.

"It doesn't really hurt in the car - I can notice it, but it doesn't really stop me from doing my job. So it's something I just have to deal with and manage over the weekends."

His diagnosis comes during a year of injuries in the field, with Nick Percat in doubt for this week's event at Phillip Island with a foot infection.

Volvo driver David Wall was sidelined from the Australian Grand Prix after a burned toe at the Clipsal 500, with James Courtney out for three rounds after a freak helicopter accident in pit lane, and Chaz Mostert sidelined for the rest of the season after his mammoth Bathurst crash.

Scott Pye also suffered a broken rib during a Bathurst accident, but did not have to miss the following Gold Coast meeting.

Fortunately there is no doubt of Reynolds contesting the final two events, as he pushes for the Championship title and a Prodrive one-two finish.

Reynolds says he is not bothered by Championship pressure.

"I put the most pressure on myself so regardless of where I'm going to be this year, or the end result of this year, doesn't faze me at all."

Reynolds will not drive within the Prodrive stable next year and is signed to Erebus Motorsport for 2016.