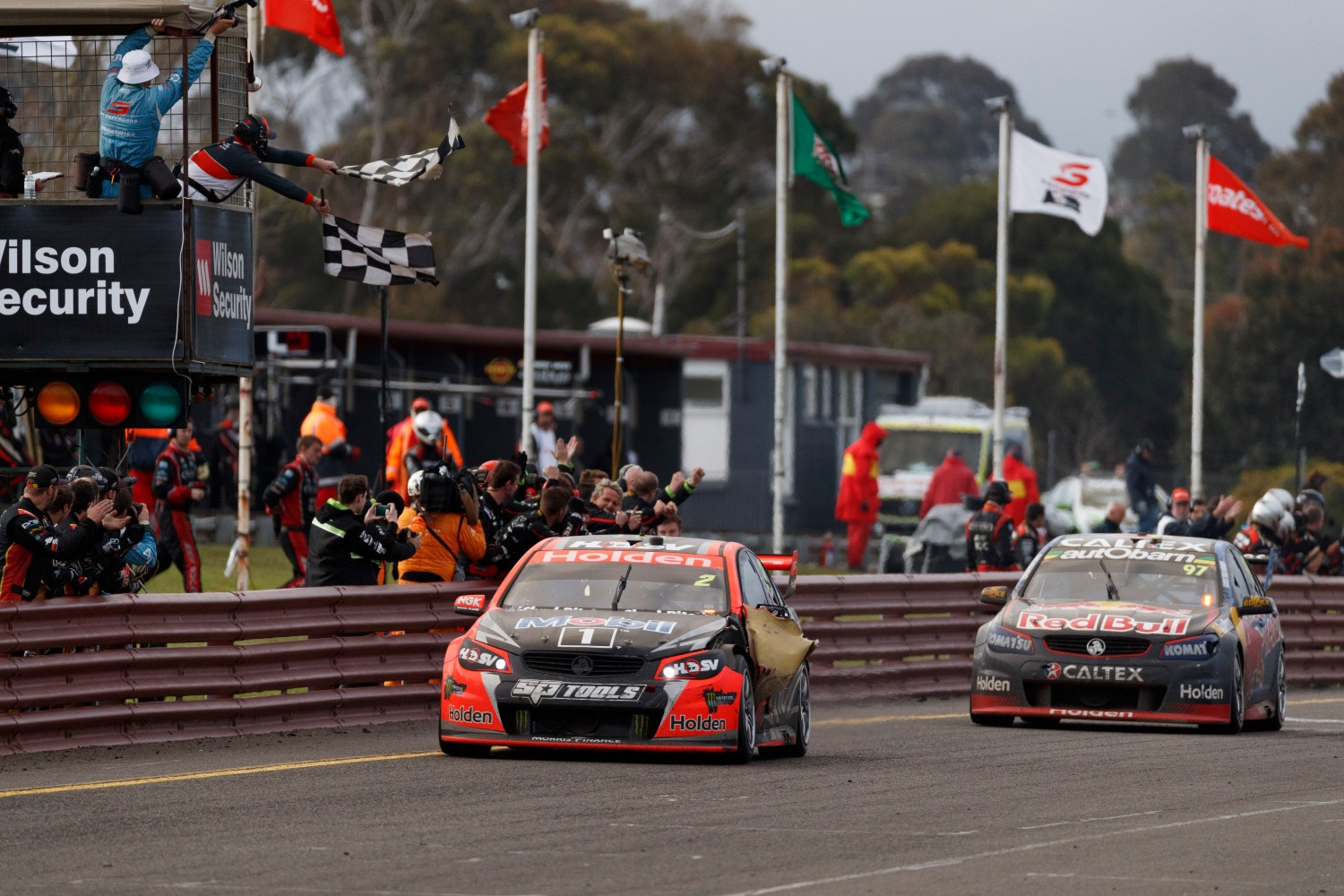 Supercars competition will return to Sandown in 2021 following a hiatus last year amid the COVID-19 pandemic.

The iconic circuit was initially left off the 2021 calendar, but it will host a sprint round in March after the Australian Grand Prix was postponed.

Nearly five years have passed since Sandown played host to one of the most dramatic races in recent history, and the last between a successful driver-team pairing.

Garth Tander had raced Walkinshaw cars since 2005, and was the Holden Racing Team’s leading light between 2008 and 2016.

Confirmation of Tander's departure from the team came just days after one of his finest drives, with the 2007 champion combining with Warren Luff to claim his 24th and final Walkinshaw/HRT victory. 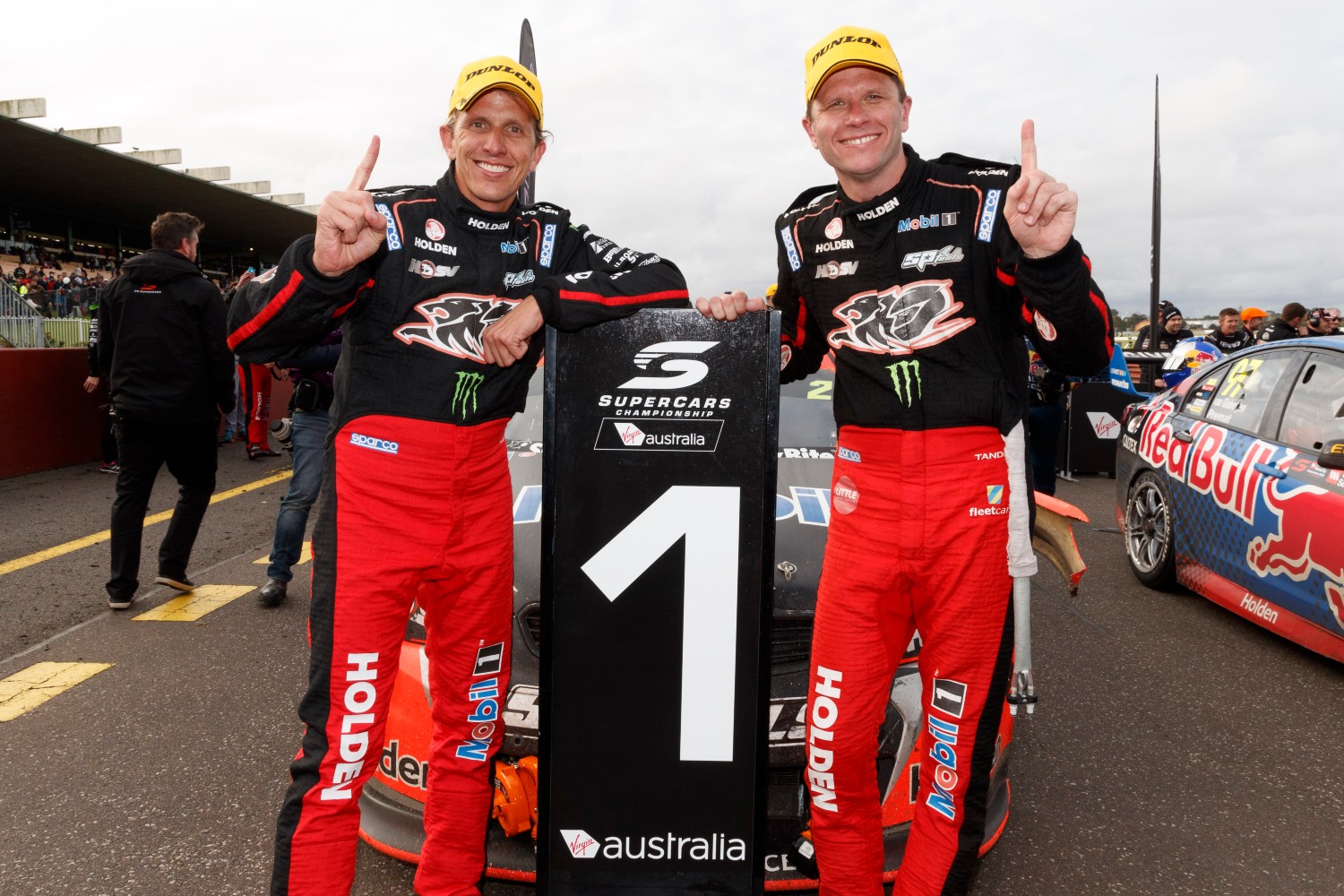 Few circuits test a car quite like Sandown, with two long straights, sweeping turns and sharp corners pushing cars to the limit.

However, in different cars three years earlier, the duo were locked in a battle that had an added element of drama when a guard on Tander's Commodore came loose.

All of the co-drivers started the race, with Jamie Whincup's partner Paul Dumbrell lining up on pole position ahead of Luff.

Luff grabbed the lead as Dumbrell bogged down, but behind them, light contact between James Golding and Jack Perkins saw the former fire into the Turn 6 barrier.

The dramatic tyre failure led to a spectacular accident, with the race red-flagged on lap 3.

After a delay of 26 minutes, with the tyre barrier repaired, the experienced Luff led the field away.

With a combined age of 79, the Tander-Luff combination was one of the most experienced on the grid.

Whether it was a fancied combination was another thing; Tander hadn't won since Townsville in 2014, with Luff winless since the 2013 Gold Coast 600.

Luff drove an assured first stint, with rain triggering the leaders to switch to wets on lap 37.

Dumbrell took the lead from Luff on lap 49, before the Safety Car was deployed six laps later when Dean Canto, co-driving for Mark Winterbottom, spun off at Turn 4.

Co-drivers had completed their minimum of 54 laps, but Dumbrell remained behind the wheel, with Tander fifth on the restart. Tander had moved up to second by lap 68, with Dumbrell still leading.

Tander regained the lead for the #2 with Dumbrell taking on more fuel than those around him.

It was found Dumbrell had removed his seat belts too early during the pit stop. Whincup was slapped with a drive-through penalty, the #88 dropped to 18th, and they would finish 13th.

With Whincup out of contention, the race was Tander's to lose, and he worked hard to regain the lead in a feisty battle with McLaughlin.

After several failed overtake attempts, Tander pitted on lap 104, and McLaughlin was followed into the lane by van Gisbergen a lap later. 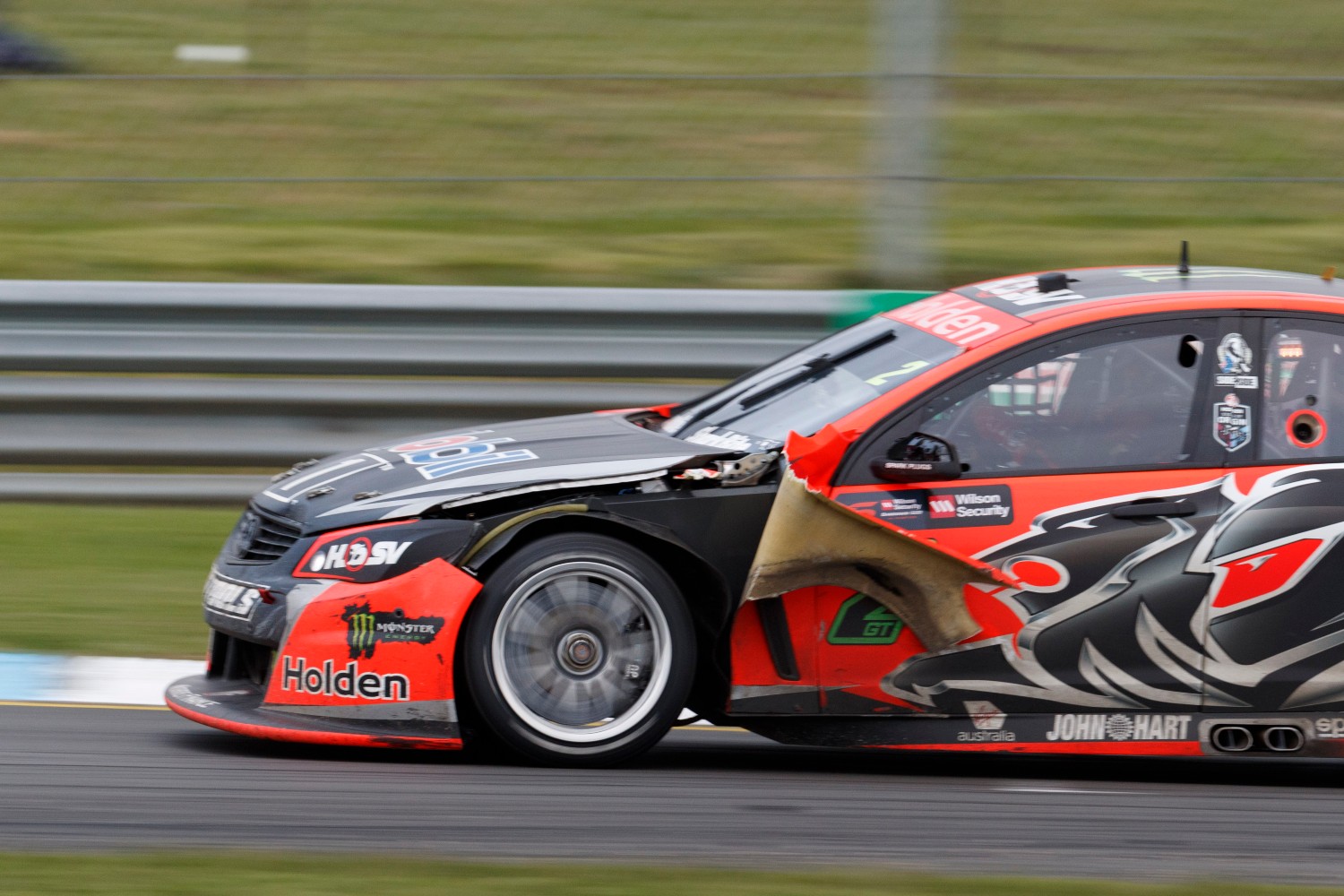 The #2 emerged in the effective lead, with van Gisbergen benefiting from an error from McLaughlin to jump into second.

The gap between Tander and van Gisbergen, once the field had cleansed, was 11 seconds. Elbow nudges and winks all-round for HRT, with Luff perhaps believing a second Sandown 500 win was a certainty.

Bang. There goes the front-left guard. On lap 122, Tander's chances began to lessen by the lap. With the damage slowing his progress, van Gisbergen began to close in.

Tander's initial blushes were saved by the fibreglass guard being fastened by the rear mounts, which was enough to satisfy the race stewards.

All the while, though, the #97 eked closer. With the race time certain, Tander scraped home by three tenths over van Gisbergen after 143 of the scheduled 161 laps. 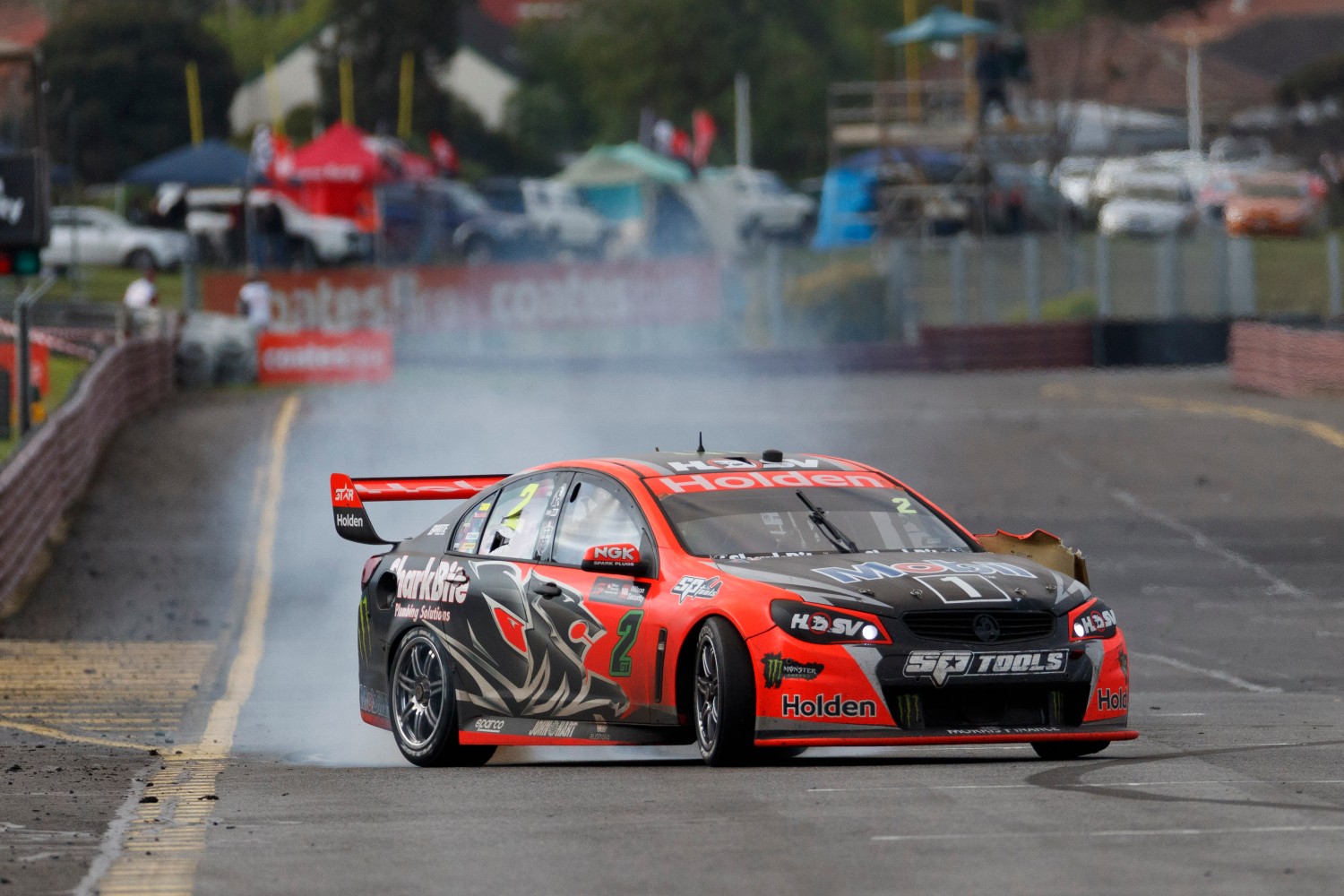 Tander had broken his drought. Luff was a winner again. HRT ended its long wait for victory, with its last coming at the season-opening Adelaide 500.

The sight of the flapping guard still had some up in arms, although it mattered little to van Gisbergen, despite the Kiwi losing out on victory from seventh on the grid.

"It lasted [until the end] so it was the right call," said eventual series champion van Gisbergen, who took the lead in the standings following Whincup and Dumbrell's nightmare.

"If they did black flag it, it would have been a hollow victory.

"They were the fastest car today, those guys, and they deserved to win." 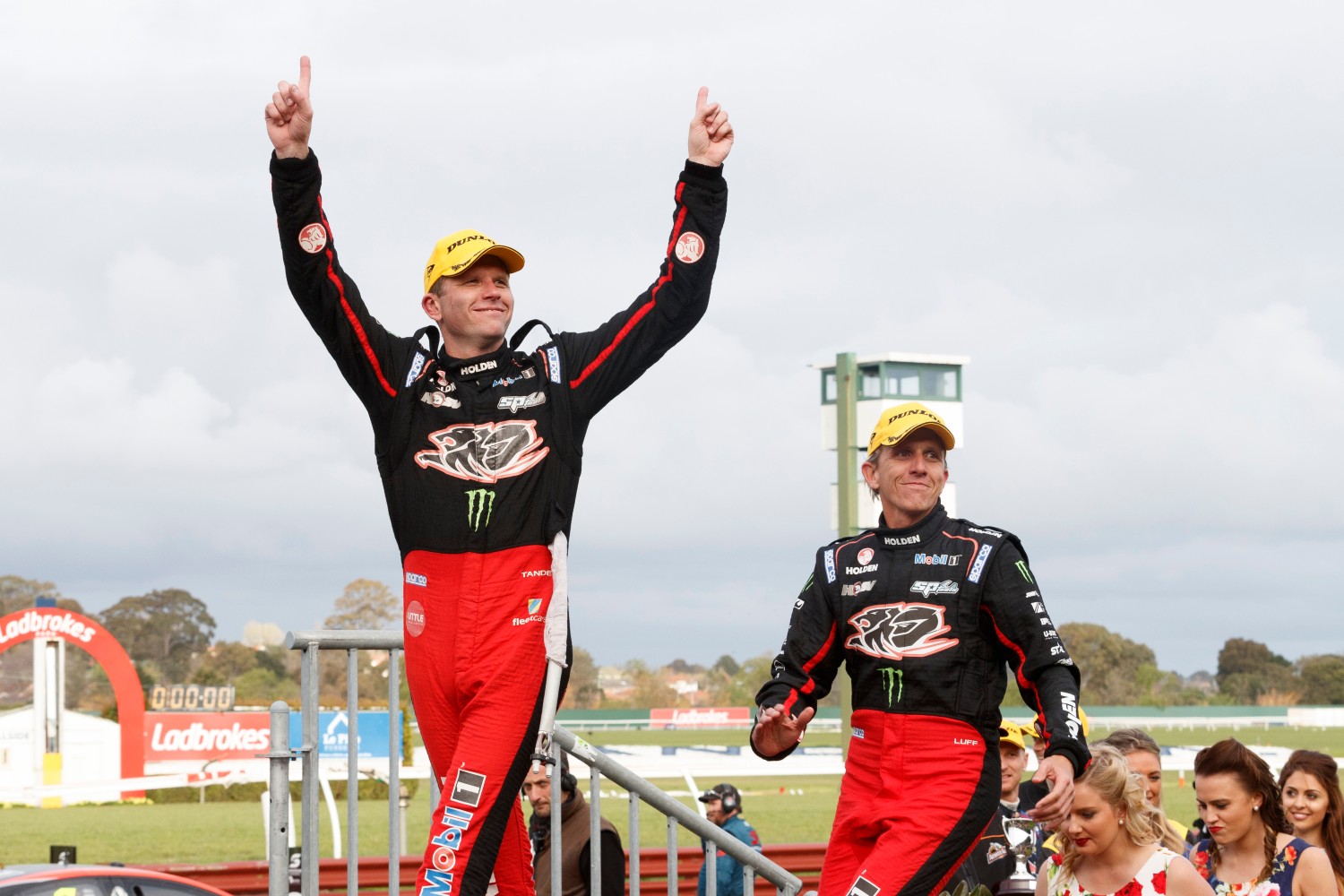 For Tander, now the fourth-most winningest driver of all time following his Bathurst win with van Gisbergen last year, the guard incident was a major surprise.

"I didn't know what had happened initially… I was looking at the dash, checking my fuel number when I heard this 'whack', and the mirror was gone," he explained after the race.

"I didn't know if I'd run over something, or what had happened. Then at the end of the back straight, the car balance was horrible.

"We had been doing it comfortably to that point, but it became very, very difficult to drive.

"[The team] kept telling me the gap, but when it got to three seconds I said, 'I can see him, just leave me alone'.

"If it was a couple more laps it would have been an interesting race."

The second round of the 2021 Repco Supercars Championship will be at Sandown in March. Tickets will be on sale soon.